Occupy the Farm: A Model of Resistance | Civil Eats

Occupy the Farm: A Model of Resistance 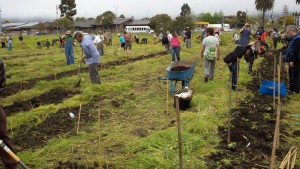 We all know that “Every Day is Earth Day” and many environmentalists feel that their eating habits are their daily affirmation of a commitment to the planet. But what does it look like to take action for the environment, beyond the fork? There are many options, of course, but one particularly inspirational tactic manifested this past Earth Day in Albany, CA.

On April 22, a week after the International Day of Peasant Struggle, hundreds of Bay Area food sovereignty activists and community members broke the locks on a huge piece of urban agricultural land, tore up mustard weeds, and planted veggies. “Occupy the Farm” was organized as an occupy-style protest, including tent encampments and a “farmers assembly,” but with one very meaningful difference: This act of “moral obedience” (AKA civil disobedience) was the direct outgrowth of years of neighborhood organizing around the piece of land in question.

The “Gill Tract” is a 10-acre parcel that has been owned by University of California, Berkeley since 1928. The university’s founding as a land grant college made the purchase of this Class 1 agricultural land an obvious choice for experimentation, and for years much of the property was used for biological and chemical pest control research. By the late 1990s, however, the future of the site was unclear, and UC began seeking other uses.

Then came the formation of the Bay Area Coalition for Urban Agriculture (BACUA), composed of UC professors in the College of Natural Resources, food justice and sustainability organizations, and local citizens. They petitioned UC to consider a proposal to develop the site into a community-focused educational farm showcasing sustainable practices. According to their mission, “The center would conduct fundamental technical, economic, and sociological research and education into ways cities can create food systems that serve citizens and the environment well through localized, economically healthy and ecologically sustainable production and distribution.”

The UC administration completely ignored this effort (and many similar efforts: see here and here) and instead made plans to sell development rights to various interests, including Whole Foods Market and a for-profit home for the elderly. This move might be a surprise for someone under the impression that a public institution’s mandate is to serve the public, not private interests. But understanding the force of “neoliberalism” on governance in the past 40 years means that we instead can expect such acts: governments are now expected to solve societal problems with increasingly austere budgets, and to turn to entrepreneurship (like the sales or rental of their assets) to bolster those budgets. Privatization and the dismantling of public programs in favor of “public-private partnerships” are only logical outcomes of this condition. Austerity (seen in reduced state funding for UC and resulting tuition increases) combines with deregulation (which led to the most recent recession) and the consolidation of corporate power within the government to create the neoliberal framework.

“Occupy the Farm” poses an alternative framework: Food sovereignty. Instead of profit seeking as the ultimate factor in decision-making around land use, food sovereignty puts public benefit in the foreground. Instead of distant bureaucracies headed by neoliberal capitalist heroes like Richard Blum (i.e., the UC Regents), food sovereignty demands local and democratic control over our public institutions. And instead of a historically and logistically impossible division of “government” on one side and “markets” on the other, food sovereignty promotes a market that is accountable and humane because it is built up from the lives and decisions of those who are affected by it. This may all sound very theoretical, but land occupations like the effort to Take Back the Tract make these ideas real, immediate, tangible, and imaginable.

Discourses of “growth” and “development” on the world scale are mirrored in fights like the one over the Gill Tract. Like World Bank and IMF promotion of a constantly growing world economy and the supposed “trickle down” of benefits from neoliberal policies, UC apologists are likely to react to the Gill Tract takeover by arguing that selling the land is the most “reasonable” act, and one that will benefit the public…eventually.

They will demonize the protestors as much as they can, belittling their image, intent, or naiveté–much like neoliberals belittle “protectionist” or “socialist” government moves (see the Economist’s recent critique of Argentina renationalizing its previously privatized oil company). If neoliberalism myopically seeks to grow markets, its opponents push for real development: of democracy, equality, and environmental health, and yes, of markets which can coexist with these values. We could attempt, as the BACUA did, to petition those in command to support development over growth. But as the Occupy Farmers decided, waiting around for powerful people to “do the right thing” can be a fools’ errand and at times it takes people rising up in powerful acts of disobedient love to force the hand of defensive elites.

In this particular case, UC elites in question are already reeling from many recent losses of legitimacy: A massive student movement perpetually protests their fee increases and union busting; their mishandling of these protests with overly zealous police violence reaps world and official condemnation; reports on the Regents’ financial conflicts of interest breed further distrust; and the general occupy movement has put the one percent on the defensive. Combined with the thoughtful planning that went into the Earth Day action (and the clear community support for it), UC’s hands have been relatively tied, and its only retaliatory act thus far has been to shut off the new farm’s water supply. This is itself a powerful show of how an occupation can be daring, illegal, inspiring, and strategic; challenging the power of a delegitimized elite while building up power from below.

Land takeovers have been more common in parts of the global South, and Occupy the Farm was enacted in solidarity with La Via Campesina, an international peasant’s movement whose largest organizational member, the Landless Peasant Movement (MST) of Brazil, has settled over 150,000 families on land expropriated from that country’s largest landholders. The action can also be linked to the struggles of independent farmers in Honduras (who took land this past week, in a political move that ties in to their already-pressing concern for the reintroduction of their democratically elected president who was deposed in a coup 2 years ago).

The Berkeley occupation may seem anomalous for it having occurred in a first world country. People have said these kinds of actions couldn’t work here: After all, we lack the peasant population of most third world countries, and we are stricken with a deep cultural commitment to the sanctity of private property. Less than one percent of the U.S. population is full time farmers. Many Americans when they hear about the Gill Tract action will probably be incapable of seeing beyond “trespassing.”

Still, no matter how important property rights are to society, their primacy must be challenged if we are to achieve a sustainable future. With such extensive control of the global food system by profit-minded corporate conglomerates, it’s an act of faith to expect them to suddenly prioritize environmental, consumer, or worker concerns. It’s equally naïve to expect our public institutions to stand up to those corporate interests, considering how deeply vested the neoliberal ideology is, and how completely beholden elected officials are to moneyed interests.

Occupying the Farm is a valuable tactical next step for the Occupy Movement, the Food Movement, and all those who care about creating a just, sustainable, and democratic life for our children. Let’s continue to occupy the food system in creative, loving, challenging, and unexpected ways.

UPDATE: Occupy the Farm is having an open house April 28-29. More details here.