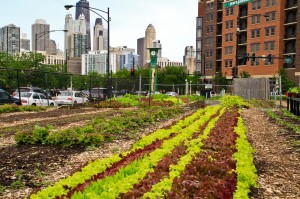 I grew up planting pumpkins in the backyard with my mom and dad.  With names like “Big Max,” “Atlantic Giant,” and “King Jack,” I always hoped come fall I might end up like James and the Giant Peach.  Each spring I would eagerly plant my seeds, carefully cover them with soil, and do my best to nurse them through the sweltering Nebraska summers.  Evil squash bugs and ever-looming drought aside, I usually ended up with at least one pumpkin that weighed more than I did.

Even though soccer practices (and later, girlfriends) kept me away from the garden for a few years, I’ve always had that experience to show me the importance of growing food.  Whether it was the magic of a tiny seed growing into something so huge (unfortunately, never like James’ peach) or the extra responsibility I felt for caring for another living thing, I understood that this was something essential.  However, it wasn’t until I traveled over 12,000 miles across the country for my film, Growing Cities, that I realized how lucky I was.

I became interested in urban farming while working at Zenger Farm in Portland, Oregon during college.  Through this experience I realized all of the amazing things people were doing with growing food in the city and yearned to learn more. Fresh out of college and having nothing but time, I formulated a plan to visit urban farmers across the country.  I spoke with my childhood friend (and filmmaker) Andrew Monbouquette about my idea and he said, “We have to make this into a movie.”  And that was the beginning of Growing Cities.

We have all heard about the problems in agriculture, from GMOs to CAFOs, but what all these acronyms don’t add up to is change.  So, we figured it was time to show off the people on the ground who were doing something positive, right in their own backyards.  And this is what Growing Cities is all about.

The film follows Andrew and me as we visit the folks who are challenging the way this country grows and distributes its food one vacant city lot and backyard chicken coop at a time. We’ve done everything from milking backyard goats to getting stung by urban bees, all in an effort to understand how much potential these activities have to revitalize our cities and change the way we eat.

We found urban agriculture has remarkable power on many different levels—it connects people to their food, strengthens communities, creates jobs, revitalizes blighted areas, and much more.  Yet, what’s most exciting to me is that it allows people to re-imagine what’s possible in cities. City farms challenge us to get beyond the urban/rural divide and really think about how we can all be producers in a society that is driven by consumption.  I think it’s this quality that is capturing so many people’s hearts and minds, especially during this rough economic time.

Critics of urban farming say it never will produce very much food.  To this I could counter with countless examples of how it already is doing so—just one, residents of Havana, Cuba produce more than 70 percent of fruits and vegetables consumed within their city.  But instead of presenting them a laundry list, I would say these “critics”  are missing the point.  On our trip we found there are way too many children who don’t know that apples grow on trees or tomatoes on a vine; kids who never have the opportunity to care for plants or even a chance to play outside.  So what?

This generation is projected to have a shorter lifespan than their parents. One third of them are projected to get diabetes (half if they are a minority).  And nearly 20 percent are obese.  And don’t tell me an average of 50 hours of electronics per week and not knowing how a carrot grows is not part of this.  We may not train the next generation of farmers in the city, but given that we need millions of new farmers and that we are predominantly an urban population, it’s worth a try.  At the very least we can educate a generation of eaters who understand how food gets to the table.

I don’t mean to say urban farming will solve all of our cities’ problems. It won’t. We are working against hundreds of years of unfair policies, social and economic inequality, rampant disinvestment in our inner cities, and so much more.  But I do think it’s a place to start.  A conversation—“Hey, you have chickens in your backyard?  Wow, my grandparents had them back on the farm.”  A journey—go out and meet people in your city who are doing this, you’ll be surprised how amazing and kind they are.  And a place to start a movement—we met or know of someone of every age, race, class, and economic situation who is growing food in the city for as diverse reasons as they are people. This is not a hippie (or hipster) movement, although there are plenty of each.  This movement is for anyone and everyone, whether you have a window, a rooftop, a pickup truck, or a backyard.  As Eugene Cook, an urban farmer from Atlanta, told us, “We’re not asking you to grow everything.  We’re saying grow something…grow where you are.”

Dan & Andrew are currently running a Kickstarter campaign and need to raise $35,000 in 30 days to complete their film.  Watch their trailer below (and make a pledge) here.

Dan is one of two filmmakers behind Growing Cities. He has visited countless urban farms and food projects across the country and worked with many leaders in the sustainable agriculture movement. Besides being a filmmaker, Dan is also the founder of Truck Farm Omaha, an edible education project which teaches youth about sustainable farming and healthy eating in Omaha, NE. Read more >