The Revolution Will Be Cofed | Civil Eats

The Revolution Will Be Cofed 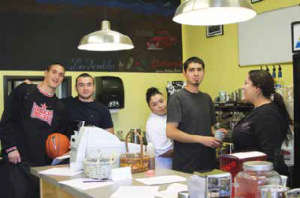 Young food movement activists may be idealistic but we are not flower children. We are process and results-oriented; we may criticize, but also we learn from successful business models. We’re comfortable with money, know how to network and are handy with a spreadsheet.

Three years ago, I was organizing protests at UC Berkeley. Now I’m at my laptop, speaking with Camilla Bustamante, a Northern New Mexico College Dean.  She’s enthusiastically telling me about a student-run, local foods cafe that has just opened at her campus.

In January 2010, CoFED (The Cooperative Food Empowerment Directive) trained Jeff Ethan Genauer, a student at Northern New Mexico College, at our Training the Trainers retreat. For 10 days, he and a group of 5 other organizers huddled together around a wood stove and wifi router in a farmhouse in Sebastopol and learned the basics of how to open a cooperative food business on college campuses. Since then, he’s been hard at work doing financial planning and market research and now, with the help of his campus, he’s successfully opened a student-run cafe. And he even taped the only-slightly-awkward ribbon-cutting.

La Tiendita (“The little store”) sells healthy, local breakfast and lunch and provides meaningful employment to 5 students. It is currently run “collaboratively”, according to Bustamante, but there is interest in transitioning it to more of a formal student cooperative, though it’s unclear whether students, or workers, or both, would be the cooperative’s members. The produce for the Tiendita is either grown onsite at the Sostenga farm or purchased from local farmers. This is an unusual project for a college that is rural, known mainly for its athletics and is not filled with affluent foodie types.

It’s not just happening in New Mexico of course. At UC Santa Barbara, they’ve gotten administrative buy-in for a solar-powered food truck, at the University of Washington-Seattle they’ve gotten rent-free cafe space and are negotiating for a prime space in their student union, at NYU they’ve gotten funding for a food cart. This summer, some 80 new student co-op organizers will gather for seven days on the West and East coasts to re-”inspiregize” and learn basic organizing, fundraising, campaigning and planning skills.

Our generation of food movement leaders gets how complex the food system is–and we are committed to addressing the whole, messy picture. These projects are educating and taking action on issues many foodies would rather ignore, including issues of race and class, of corporate control and workers’ rights. And it’s definitely not just CoFED that sees things in this way.

I was privileged to join the Real Food Challenge leadership for a weekend national planning retreat last year. In between creating next year’s plan for shifting campus dining dollars towards real food purchasing, we took a couple hours to reflect on privilege and how it manifests in the organization. It was simply that integral to the work being done. Youth-led hunger organizations are seeing the connections as well–FeelGood’s student leaders don’t just want a world without hunger, they want water that is clean to drink and workers to have jobs with dignity.

To me, it’s clear that this is where the food movement is going–towards a justice orientation–and that’s because this is where the energy is with young people. The reason CoFED has been able to get over 250 students to commit themselves to starting cooperatives on 37 campuses is not just that students are excited about good, healthy food or starting their own business (they are though!).

Our generation is coming of age with the starkest income disparity since the 1920’s, with climate change already making major impacts on our environment, with student debt creeping towards $1 trillion, with progress on race and gender issues stagnating. We did not create this mess. We are pissed, so we are connecting the dots and we are skilling-up.

When our student leaders say, “I’m starting a co-op”, they are saying they find the individualism and alienation that defines much of our economy and our culture unacceptable. They are channeling common sense from kindergarden teachers, like that we should clean up after ourselves and share.

When CoFEDerates do our work, we are creating systems that acknowledging our interdependence–with those people we would easily ignore, with a future planet that our children will inhabit, between our health and what we put in our bodies. If you’ll excuse the pun, we’re creating a world that is “co-fed.”

Bustamante, of the NNMC cafe, says it is doing so well that they are expanding to a second cafe and considering converting the rest of the school’s cafe services. With this success, CoFED as an organization is looking at longterm growth and sustainability. As I write this blog, we’re wrapping up a $125,000 challenge to find 212 monthly donors at $12 a month (we’re at 184 right now, you can still give to help us reach our total!).   We’ll continue to meet the challenges ahead of us and keep growing–as will our allies in the young food movement.

Yoni Landau is the co-founder and Chief Evangelist of CoFED (the Cooperative Food Empowerment Directive). After launching a successful campaign to prevent the first fast food chain from opening at UC Berkeley, he helped raise over $120,000 for a cooperative alternative, the Berkeley Student Food Collective. He enjoys doing fundraising consulting and organizing #occupy actions in the Bay Area. Read more >