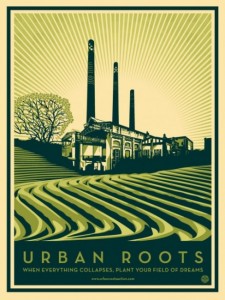 Mark MacInnis is a native-born Detroiter who returned in 2009 to document a burgeoning urban farming community that is converting abandoned lots and open spaces into local food production and a sustainable food system. His film, Urban Roots, takes a close look at what happens to a city after a post-industrial collapse and suggests a new type of American Dream – one founded on nourishing community through the creation of a local economy. In a place where 46.6 percent of children live below the poverty line, there is an urgent need for change.

Having interviewed over 50 people during a two-year span, MacInnis has created a film that speaks to the “positive spirit” of the urban farming movement. He “pulled the weeds, bailed some hay” and grew to know the community as an inducted member. “There’s a bond that takes place when you’re working together on that farm that you can’t really find in other places,” he says. “You’re laughing; you’re working; you’re sweating; you’re bonding over food.” There is much potential in the city’s neglected 40,000 plots of land – and the vibrant marketplace they could create.

“It’s [Detroit] not Chicago, or San Francisco, or LA, where land is so coveted,” MacInnis offers for comparison. And still, the issues around zoning laws and land ordinances remain fuzzy at best. Some of the farmers featured in the film do not own the property they tend. Chickens are raised in dilapidated houses, plants are grown on unsanctioned plots – productivity blooming without official permission. Then there is D-Town Farm, an operation of the Detroit Black Community Food Security Network, which manages a seven-acre plot of land through partnership with the Detroit Area Regional Outreach Training Center for Growing Power Inc. Legal or illicit, these plots of land are thriving as agricultural spaces, so it seems only logical that the state should reconsider outdated regulations that were designed for a city of two million during the 1950 heydays. Now, as the city population has diminished to approximately 700,000, community-powered farmers want new regulations for city land use. By becoming producers, urban farmers are taking part in an improved, fair, localized food system – and they want to keep it that way.

Various perspectives within the movement are presented: There’s Matt Allen from Hantz Farms – a superpower of urban agriculture with Big Ag tendencies; former Mayor, Dennis Archer; and finally city planner, Kathryn Underwood. Each responds differently to the question of what revitalization means for the Detroit. MacInnis and his crew lend their own voices to the conversation. “We want to attach action,” he explains, when asked about the next steps for Urban Roots. Tree Media, Urban Roots’ production company, is doing just that, coming “full circle with story-telling” through their Farms in Schools initiative. Tree Media’s foundation currently supports a school garden at Garfield High School in Los Angeles and five more pilot schools will be added once they raise the funds to expand their programming. (You can help their efforts by donating here.)

To date, Urban Roots has been screened all over the world: in churches, at festivals, in breweries, at community centers and during neighborhood gatherings. MacInnis estimates that over 100,000 people have watched the film so far, and in July the film will appear in theaters. He also encourages interested people to contact Tree Media to organize a screening. “The film is not done yet. The whole mission is not done yet,” declares MacInnis.

Detroit farmers will continue to build their city from the roots upward. There is still much to be done to guarantee a protected system that honors their communal desire to grow a productive, secure and sustainable economy. But at the end of Urban Roots, their vision remains intact and fortified.

With the closing words of community farmer, Greg Willerer, we begin to see what a revitalized Detroit can look like:

“We’re not trying to create another institution. We’re trying to create a bunch of small 1-2 acre urban farms. To me, that’s pretty wise, because when you think about – from an urban planning standpoint – why do people go to New York or Toronto? They go there to see that whole labyrinth of stuff to do. And pretty soon, maybe in another 5 or 10 years, we’re going to have our own mosaic of small, urban agriculture businesses here.”