Hats off to this mother of three who got fed up and took charge. Thirteen years ago, Sofía Gatica’s newborn died of kidney failure after being exposed to pesticides in the womb. After the despair came anger, then a fierce determination to protect the children in her community and beyond.

Today, she’s one of six grassroots leaders from around the world receiving the Goldman Environmental Prize, in recognition of her courageous—and successful—efforts.

Pesticide Action Network will host Sofía as she travels to San Francisco for tonight’s ceremony and celebration.

Sofía lives in Ituzaingó Annex, a working-class neighborhood of 6,000 bordering commercial soy farms in the province of Córdoba in Argentina.

Argentina is the third largest exporter of soybeans in the world. It is also the third largest producer of genetically engineered (GE) crops worldwide, following closely behind the U.S. and neighboring Brazil. The explosion of GE soy production in Argentina has brought with it dramatic increases in pesticide use, and specifically aerial spraying of Monsanto’s weedkiller, RoundUp. Spraying of the antiquated insecticide endosulfan was also common until this year. Its use is now banned in Argentina as it moves toward a global phaseout under the Stockholm treaty.

RoundUp, long touted by Monsanto as all but harmless, has recently been linked to increased risk of birth defects when mothers are exposed during pregnancy. Endosulfan has also been linked to health harms in children, including birth defects, reproductive harm and autism. 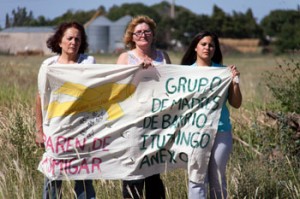 After she lost her newborn, she realized that such losses were all too common in her small community. Building on Argentina’s powerful history of movements led by mothers, Sofía worked with other concerned moms to go door to door collecting stories about health problems in each family—essentially conducting the community’s first-ever epidemiological study.

Despite few resources and very real threats, Sofía led the Mothers of Ituzaingó to concrete victory.

“The Mothers of Ituzaingó” discovered the community’s cancer rate to be 41 times the national average. Rates of neurological problems, respiratory diseases and infant mortality were also astonishingly high.

The group then launched a “Stop the Spraying!” campaign, leading demonstrations and publishing materials warning the community about the dangers of pesticides.

Their efforts bore fruit. In 2008, Argentina’s president ordered an investigation of the health impacts of pesticides in Ituzaingó Annex; the resulting official study corroborated their informal door-to-door research. Sofía and the Mothers of Ituzaingó then won a municipal “buffer zone” ordinance, prohibiting aerial spraying less than 2,500 meters from homes.

Each year since 1989, the Goldman Prize has honored grassroots leaders across the globe, unsung heroes who are campaigning for environmental justice and sustainability in their local communities. This global recognition of Sofia’s work couldn’t be more deserved.

Despite few resources and very real threats—including being held at gunpoint in her own home—Sofía led the Mothers of Ituzaingó to concrete victory: on-the-ground protections for the children in their community. The group also raised the profile of the broader issue of the health harms of pesticides to the national level, making room for a push for safer and more sustainable approaches to agriculture.

Sofía is now working with mothers in other Argentine communities, looking for ways to expand protections to families across the country.

Kristin Schafer is a senior policy strategist at Pesticide Action Network. Before joining PAN, Kristin worked for the World Resources Institute’s Sustainable Agriculture program, as a communications specialist for the U.S. EPA, and as an agro-forestry extension officer with the Peace Corps in Kenya. At PAN, she coordinated the international persistent organic pollutants (POPs) campaign under the Stockholm Convention for several years, as well as PAN's successful campaign to phase out methyl bromide under the Montreal Protocol. Read more >