Protecting Water at the Source 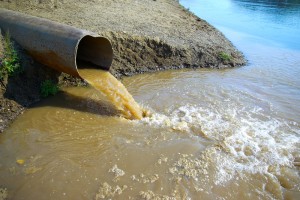 One of the big challenges facing the globe in the next century will be access to clean water.

In America, federal agriculture policies are putting drinking water used by millions of people at risk. Perverse incentives such as farm subsidies and ethanol mandates have ushered in an era of fencerow-to-fencerow planting of chemical-intensive commodity crops, even as funding to protect water sources has been repeatedly slashed.

The result is that water running off poorly managed fields that have been treated with chemical fertilizers and manure is loaded with nitrogen and phosphorus, two potent pollutants that set off a cascade of harmful consequences.

Troubled Waters, a new Environmental Working Group report released on April 12, examines the water pollution caused by farm runoff in the upper Midwest and demonstrates that treating the problem after the fact is increasingly expensive, difficult and, if current trends continue, ultimately unsustainable. Because most farm operations are exempt from the requirements of the federal Clean Water Act and states have little authority to compel farmers to control water contamination, the burden of cleaning up agricultural pollution in drinking water falls mostly on municipal treatment systems – and the taxpayers who pay for them.

The city of Des Moines, Iowa has one of the largest water treatment plants in the world to clean agricultural pollution. Toledo, Ohio, estimates that it costs an extra $2,000-to-$3,000 a day just to deal with agricultural pollutants in the city’s water. USDA economists calculate that the cost of removing nitrate alone from drinking water is more than $4.8 billion a year nationwide. The capital costs alone of a system to treat water fouled by nutrient-fueled blooms of algae and the cyanotoxins they can produce can total $12 million to $56 million for a town of 100,000 people.

Taxpayers end up paying twice, once for the subsidies that encourage all-out production and again for the cleanup. Meanwhile, farm businesses reap year after year of high income and federal subsidies whether they are protecting or polluting drinking water.

The health risks of tainted water are severe. Infants who drink water with high nitrate levels can develop a life-threatening blood disorder called blue baby syndrome, and in adults nitrate increases the risk of thyroid cancer and other illnesses. The toxins produced by blooms of cyanobacteria (blue-green algae) can be deadly to pets, livestock, wildlife–and people.

Many American farmers are responsible stewards of land and water. But the list of drinking water sources and water bodies imperiled by agricultural pollution grows daily and now includes the Chesapeake Bay, the Great Lakes and the Gulf of Mexico. U.S. Department of Agriculture researchers say fertilizer use on two-thirds of the nation’s agricultural land does not conform to science-based best management practices. Growers spread too much, spread it at the wrong times and use methods that are prone to losing nutrients into runoff. In addition, installation of “tile drainage,” which is common across the Midwest, promotes the movement of nutrients into streams.

Restoring a strong conservation title in the reauthorized farm bill now being drafted in Congress is the best non-regulatory approach to protect drinking water sources. Congress must also bring crop and revenue insurance programs back under the decades-old conservation compact that required farmers to use good conservation practices in return for a taxpayer-funded safety net.

Most Americans are in line with this thinking. A 2011 Packard poll found that 69 percent of those responding said that reducing use of agricultural chemicals that contribute to water pollution should be a top priority. A significant majority–57 percent–was against cutting funding for farm conservation programs. And 60 percent said farmers should be required to meet environmental standards–such as protecting water quality or soil health–as a condition of receiving federal farm program payments and subsidized crop insurance. That number jumped to 65 percent in the six biggest corn ethanol-producing states.

EWG senior scientist Olga Naidenko PhD, lead author of the Troubled Waters report, was clear about what needs to happen next:

“The only solution to preserve clean water is to tackle the problem of polluted agricultural runoff at the source.”