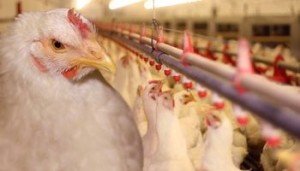 The U.S. Food and Drug Administration is taking its biggest step yet to rein in the indiscriminate use of antibiotics that help food animals grow bigger, faster. The agency said Wednesday it is asking veterinary drug makers to voluntarily phase out medically important drugs from being available over the counter in the hope that the shift will help combat growing antimicrobial resistance.

Under FDA’s proposal, these antimicrobials will still be allowed in animal agriculture but, if veterinary drug companies agree to change the labels, farmers will be allowed to use the drugs only to prevent, control, or treat diseases and under the supervision of a veterinarian and not for promoting growth or improving feed efficiency.

The agency said it was taking the voluntary action to “preserve the effectiveness of medically important antimicrobials for treating disease in humans.”

According to the most recent estimates, around 80 percent of all antibiotics sold in the United States are given to animals. FDA said it doesn’t know what percentage is used for growth promotion or so-called production uses, which the agency is trying to limit.

The reaction in the public health, veterinary pharmaceutical and animal agriculture community was mixed, but mostly negative.

The Pew Charitable Trusts, which has been lobbying for limiting antibiotic usage in food animal production for years, gave the move a tepid thumbs up.

“This is the most sweeping action the agency has undertaken in this area, as this covers all antibiotics used in meat and poultry production that are important to human health,” said Laura Rogers, director of the Pew’s Campaign on Human Health and Industrial Farming. “There are some gaps in these measures that we will urge FDA to address and, because this is voluntary, we will have to monitor antibiotic usage and resistance rates carefully. If these measures do not bring down antibiotic use and drug-resistant bacteria, then FDA will have to take additional steps.”

“We strongly support responsible use of antibiotic medicines and the involvement of a veterinarian whenever antibiotics are administered to food producing animals,” said AHI. “While we agree with this direction and the collaborative, stakeholder process, there are details that must be addressed to make this approach practical and workable.  We will continue to work with FDA through the comment process to address these details.”

Most consumer and pubic health groups expressed disappointment that the proposal is voluntary and seems toothless.

The Center for Science in the Public Interest called the plan “tragically flawed” because it relies on the industry to voluntarily act in the best interest of consumers, though it did applaud the agency for recognizing the “public health imperative” to address the problem.

The Union of Concerned Scientists, which has been working on the issue for years, was also critical of the voluntary move.

“The approach announced represents a bold, well-intentioned attempt by the FDA to persuade an entire industry to voluntarily abandon claims that allow them to sell a large number of lucrative products,” said Margaret Mellon, the group’s senior scientist. “We have no reason to believe that the veterinary pharmaceutical industry–which, to date, has rarely even acknowledged that antibiotic resistance is a serious public health issue–will cooperate with the agency on a plan that could reduce its profits.”

The National Pork Producers Council blasted the proposal, arguing that it would be burdensome for producers in remote areas who have trouble getting access to veterinary care. NPPC called the plan “problematic” for pork producers, and said it believes the move would not only have a negative effect on animal health, but also increase the cost or producing food.

Congresswoman Louise Slaughter (D-NY) called the announcement “a step in the right direction,” but said she believed “much more must be done.”

“Antibiotic-resistant diseases now kill more Americans than AIDS and this issue needs to be treated with the seriousness it deserves,” said Slaughter, who has introduced legislation on the issue. “Of course if an animal is sick it should be treated, but the misuse of antibiotics in animal feed is destroying the effectiveness of antibiotics and limiting our ability to treat human illnesses.”

“Nonbinding recommendations are not a strong enough antidote to the problem,” added Slaughter.

It is not clear exactly how FDA will measure progress on its voluntary initiative. If drug companies agree to change their labels over the next few months, they are to notify FDA and then they have three years to voluntarily phase in the changes.

Agency officials were hesitant to say whether the public should expect a significant drop in overall antibiotics usage. Michael Taylor, FDA’s Deputy Commissioner for Foods, said that if progress is not what the agency expected then FDA will look at other regulatory options.

The FDA’s voluntary guidance is independent of a recent court order that directed the agency to revive a 35-year-old proposal to ban three antibiotics from animal feed–penicillin and two types of tetracycline–pending hearings.

In 1977, FDA determined these three antibiotics were likely contributing to drug-resistant bacteria strains in humans and should be reserved for only therapeutic uses. But the agency never held the drug company hearings required to put this proposal into place, and in December of 2011 it revoked these approval withdrawals altogether. In March 2012, a federal court ruled that FDA had to revisit the issue.