Kickstarter Food: Put Your Money Where Your Mouth Is | Civil Eats

Kickstarter Food: Put Your Money Where Your Mouth Is 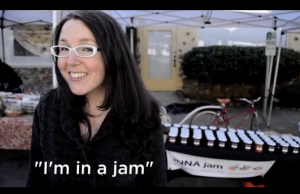 Edible entrepreneur/video editor Dafna Kory is an ideal candidate for a food-focused Kickstarter campaign. Kory, founder of Inna Jam, an organic artisan preserves company in Berkeley, Calif., supplements her budding food business with commercial film, video, and web editing gigs and is well-acquainted with the crowd-funding platform. So, when it came time to expand her jam company this winter, she decided to give Kickstarter a whirl.

“It’s a very public thing—putting yourself out there like this—and it could have gone either way,” says Kory, who produced her own video for a campaign to renovate a commercial kitchen. The jammer already has some small business loans and didn’t want to take on any more debt. Kory, who just wrapped up her Kickstarter campaign, says it was by no means an easy endeavor. “I used every skill I have to make this campaign a success.”

Kickstarter, based in New York, earned its early reputation as the go-to place for up-and-coming filmmakers, gamers, and designers looking for funds. Increasingly, though, it’s become a hub for those involved in the sustainable, local food scene seeking capital for their creative pursuits as well. In the Kickstarter worldview, food artisans are artists too, whether they’re behind a community olive oil press in Berkeley, a beekeeping business in Brooklyn, or a Lebanese food truck in Asheville, N.C.

Starting an edible enterprise is expensive and risky, particularly in tough economic times. An infusion of cash via Kickstarter can be just the boost a food venture needs to go from fantasy project to viable business—with no loans to repay. A typical food project raises about $5,000. Kory, who began making jam commercially in 2010, sought $25,000 to buy equipment like convection ovens, cooking ranges, stainless steel work tables, and other tools of her trade. Her recent success, gathering nearly $28,000 from 474 backers, landed her on a list of the most funded Kickstarter food projects to date. “I’ve been truly humbled by the generosity,” she says. 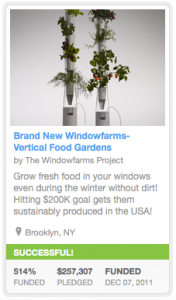 Kory’s windfall is by no means the biggest. That honor—tallying a whopping $257,307 last December—currently goes to Windowfarms, a Brooklyn-based vertical gardening enterprise, which allows people to grow herbs and produce in small spaces in the privacy of their own homes. Via video, Britta Riley, who runs the hyper-local company, essentially asked investors to pre-buy a product that hadn’t been manufactured yet. The company’s goal—in retrospect, a modest $50,000—followed a successful initial Kickstarter campaign in 2010 that netted $28,000 for the new business (a record for its time too).

In second place for the most money raised to date: A Washington, D.C., public school kitchen($60,000), and in the No. 3 slot, a meat-curing processing facility in Pennsylvania ($48, 000). Last year, 241 successful Kickstarter food projects netted over $2.8 million from more than 30,000 backers. The projects reflect recent food trends—think artisan brewing, mobile cupcakes, urban farms, edible education, vegan pop-ups, and community restaurants—and appeal directly to a generation that has grown up online.

Why do food projects do so well with this new fundraising mechanism? For starters, behind these appeals is a good story, and everyone loves a good story, note the Kickstarter crew. Creators who articulate clearly what they’re working to accomplish in a compelling way do well, says Kickstarter’s Justin Kazmark, as do campaigns that offer creative rewards or a behind-the-scenes view of the creative process.

But that’s not all. “There’s also an increased awareness in the importance of supporting local, independent businesses as a way to preserve the unique character of our communities,” says Elizabeth Ü of Finance for Food, who curates a page of food project favorites on Kickstarter. “These projects allow people to experience a sense of vicarious pride for those who turn their passions into a tangible project,” adds Ü, author of the forthcoming Raising Dough: The Complete Guide to Financing a Socially Responsible Food Business.

For those unclear on the concept: Kickstarter curates its site (projects are selected and must meet specific guidelines). A tiered reward system is set up based on the pledge amount. For instance, Kory offered pledgers who gave $25 or more a jar of her jam while those who gifted $50 or more will receive three jars, and so on. Anyone who donated $2,500 was guaranteed their moniker on a convection oven. (No takers.) In addition, locals were offered incentives such as a behind-the-scenes tour of the kitchen, an invitation to the grand opening, and tickets to Kory’s jam-making classes.

Unlike another internet-based fundraising platform, IndieGoGo, which includes food projects and allows creators to keep all the money they raise, Kickstarter has an all-or-nothing approach: People seeking support must meet their stated financial goal in a specific time frame, often 30 days, or they get none of the money pledged. On the plus side, this adds a sense of urgency to the campaigns—and a good deal of anxiety for those running them. Food projects have a higher success rate (56 percent), compared with all Kickstarter projects combined (47 percent), Kickstarter co-founder Yancey Strickler told the Los Angeles Times.

Project creators must keep in mind that for successful campaigns, Kickstarter keeps a 5 percent cut of pledges, and an additional 3 to 5 percent comes off the top for Amazon Payments, which handles the monetary transactions. Recent changes to reporting requirements mean that these donations are now subject to taxes too, which was something of a grey area (gifts versus revenue?) in the past.

While there are many pluses to food-specific projects, there is one obvious drawback: Food products make great rewards for pledgers, but prospective funders can’t sample the merchandise via cyberspace, in the way they can, say, consume an art project or film trailer online. So there’s also a certain leap of faith required on the part of prospective funders.

Benefits beyond bankrolling a business 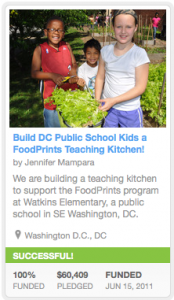 Kory believes there are benefits beyond bringing in the big bucks. “It’s been amazing publicity—just getting my product out there to a national audience,” says Kory, whose initial support came from family, friends, other food artisans, and customers. But as word spread, more pledges started coming in from people she didn’t know. “It’s also created this much larger community around what I do,” she adds. “When people get involved with a project in this way, they have a vested interest in seeing you succeed.”

The pair behind the popular sustainable food video series The Perennial Plate, Minneapolis-based chef/filmmaker Daniel Klein and cameragal/co-producer Mirra Fine, used Kickstarter to fund their local series because it was the easiest web-based fundraising platform to use. It was also the best looking, and had garnered a lot of attention. “I think people are more likely to put their money into something that looks legitimate,” says Klein. The first time around, The Perennial Plate raised over $10,000 for its Minnesota-focused weekly web series. In April of last year, for their road trip video tour across the country, they reeled in over $22,000.

It’s not enough, says Klein, to have an awesome project. “The key to a successful campaign is to have built a community that wants to support your work and values it,” he says. “Most people who give aren’t random browsers. They’re more likely to be someone you’ve engaged with online or met in real life.” His other advice: Make your video short, funny, and personable. “People make their videos too long.” He also points to the importance of appealing rewards. “People want something in return, whether it’s a DVD or T-shirt or whatever.”

What else brings in the bucks? It’s key that a project has a specific beginning and end, or is something that’s already in the works, and exudes an authentic approach that is more personable than professional (think cocktail party over job interview). Getting the nod from Kickstarter as a “project we love,” social media buzz, and traditional media coverage can make a difference too. Kory agrees with Klein’s advice and adds one more piece: Show your gratitude. She thanked every donor individually, and included an update of herself jumping for joy after reaching her goal on her Kickstarter page.

“Being public about financial struggles is kind of scary,” she says. “But I got so much positive feedback it was worth those anxious moments when I wasn’t sure I’d make my goal. I wasn’t prepared for how meaningful it would be to build a whole new community. You can’t put a price on that.”