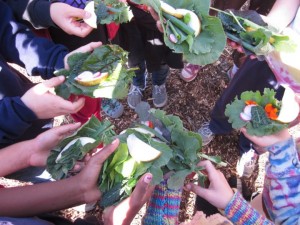 Under existing guidelines, the schools will no longer qualify for federal funding because they have fewer than 50 percent of their students enrolled in the free and reduced-lunch program, according to Leah Sokolofski, who supervises the program for the district.

Berkeley has an international reputation for its edible schoolyards, where public school children of all economic means learn what it takes to grow a radish and sauté some chard. Such funding cuts to the program, whose total budget is $1.94 million a year, would represent a significant setback in the city’s pioneering efforts to date.

School gardening and cooking champion Alice Waters, whose Chez Panisse Foundation helped fund the Edible Schoolyard at Martin Luther King Jr. Middle School, expressed dismay at the potential budget cuts to programs. “It’s inevitable cuts will come—people think these programs are dispensable and the state of California is in a financial crisis—but it’s a tragedy,” she said.

Waters recently raised over $500,000 to launch the Edible Schoolyard Project (ESP), an online resource that shares curriculum and best practice principles for garden and cooking programs with schools around the country. ESP has affiliate programs in San Francisco, Los Angeles, New Orleans, and New York. “We have to continue to make the case for why an edible education is so important to the health of every child and the health of the whole country,” she said.

BUSD school garden and cooking programs are funded through September 2012 through Network for a Healthy California, a state program that distributes federal monies to local school districts through a three-year grant. The network seeks to improve the health of low-income Californians through increased fruit and vegetable consumption and daily activity.

Changes to the way school cooking and gardening programs are funded are coming down the track, however, following the passage of the Healthy Hunger-Free Kids Act, which President Obama signed into law amid much fanfare in December 2010, with the goal of improving childhood nutrition.

“Until the new guidelines for eligibility are released we just don’t know what’s in store for our school programs,” said Sokolofski, who anticipates hearing later this month. “This is the biggest change in the funding for these programs in 11 years.”

Further complicating matters: The U.S. Farm Bill is up for reauthorization in 2012. Potential changes to funding priorities there may impact all the BUSD’s gardening and cooking programs as well. “The Farm Bill is yet another wild card because that’s the overall place where our funding comes from,” explained Sokolofski. “And any changes there could trump changes elsewhere. There are a lot of unknowns right now.”

While it’s possible that funding for these programs could remain intact, for now the immediate concern is the three schools who will likely not qualify for federal funds for the next school year, Sokolofski said. 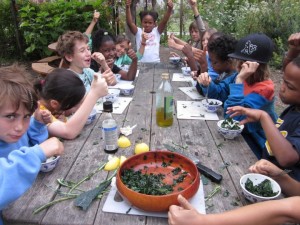 Sokolofski has been sharing her concerns with school administrators, principals, parents, and teachers. A recent presentation at Malcolm X spurred dozens of parents to attend the March 7 BUSD board meeting, where they made a passionate case for protecting a program beloved of both students and adults.

Malcolm X parent and family doctor Shannon McCune, a Malcolm X alum herself, sees many young children in her practice and said she can immediately tell which of her patients have gardening at school. “They have a favorite vegetable and know why they’re good for you,” said McCune, whose daughter recently taught her mom how to make kale salad by massaging the leaves with oil, which eliminates the need for cooking the fibrous vegetable. “I would never have known how to do that if my daughter hadn’t shown me.”

Another physician-parent echoed McCune’s sentiment. Mickey Adams, a parent from Washington Elementary, talked about the challenges of working with adult patients who have obesity and other lifestyle diseases. “These people don’t know how to eat well and cook food—they’ve never been taught,” said Adams, whose children make recipes at home they’ve learned in school cooking classes. “These programs work and there will be so much damage done by cutting them and we’ll all pay on the other end.”

If kids grow and cook it they will eat their greens

As a school board member noted at the March 7 meeting, the value of such programs was measured in a recent UC Berkeley study, which found that young students routinely exposed to fruits and vegetables through cooking and gardening instruction ate 1.5 more servings of produce a day compared with kids with fewer opportunities to dig in the dirt and work the stove at school.

School gardening teacher Joy Moore doesn’t need data to know the benefits such programs can bring. This kind of instruction gives young people alternative and innovative ways to learn, along with “skills for life,” said the long-time school food advocate.

School board president John Selawsky promised parents that the board will “see what it can do,” while acknowledging the challenging fiscal constraints already impacting the school district. 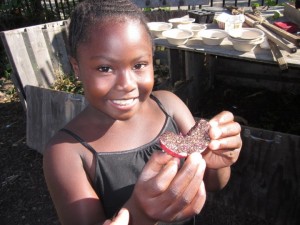 For now, Berkeley schools are researching ways to sustain these threatened programs. “We’ve been looking at the possibility of grant funding, but most of the grants available are small and aimed at schools just starting a garden plot,” said Alexander Hunt, principal of Malcolm X. “We haven’t been able to find anything comparable to the $135,000 we stand to lose.”

Despite serving a growing group of children in need, Malcolm X’s free and reduced school lunch numbers stand at 46 percent of its student body. “Materials can’t replace the quality of programming currently being provided by our staff,” said Hunt. “It’s wonderful how these classes engage students in learning at the same time they impart the benefits of health and nutrition. They’re key to our students’ education.”

The Malcolm X PTA is also exploring whether a large corporation, local merchants, philanthropic individuals, or some other benefactor may step in to fill the void. It is also in the early stages of discussions with other PTAs about a collaborative effort to secure contributions. “The garden and cooking program at Malcolm X is beloved by the school community and the community at large,” added Hunt. “It’s sad to see that in the place where this school food movement started, we’re now going backwards trying to sustain these valuable programs.”

Malcolm X parent Marian Mabel noted a sense of urgency to secure funding for next year, which must be identified by June 30, when the school district’s budget is finalized. In addition, Mabel pointed out that not all the city’s schools currently offer these programs—Berkeley Arts Magnet, Cragmont, Jefferson, and Oxford don’t receive any federal funds for such instruction. These schools rely on parent volunteers, PTA funds, and other sources to fund programs at their sites, if they have them at all.

“Short term, these three schools need to fill these funding gaps,” said Mabel, “but long term we want to find ways to make these programs available and sustainable to every public school student in Berkeley.”

As for Waters, another ESP program is in the planning stages for Sacramento, a strategic move, she said, so that she would be “under the noses” of state legislators. Waters, whose foundation has gifted about $10 million to BUSD, mostly to the Edible Schoolyard at King, also hopes that the governor will convene a taskforce for edible education soon to address the healthcare crisis among school children.

A parent-led meeting open to the community to update interested parties about the problem and brainstorm ideas about potential solutions is scheduled for today, Monday, March 26, at the Malcolm X library at 7 p.m. Malcolm X is at 1731 Prince Street. Parents will also prepare public comments for the school board meeting on Wednesday March 28, where they intend to keep this issue on the minds of school board members.

Photo: Middle, sharing the pleasures of an outdoor table at Berkeley’s Malcolm X Elementary School. Below, Malcolm X’s school under the sky teaches more than just how to grow good food.