Strawberry Lovers Rejoice: Methyl Iodide Off the Market for Now 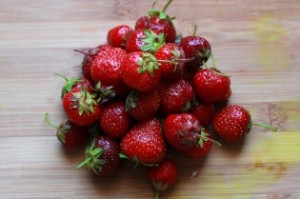 We hear a lot about recalls these days. But last night it wasn’t ground turkey, cantaloupes, or peanut butter that was taken off the market. It was one of the most hotly contested pesticides in recent memory: methyl iodide. As reported by the San Jose Mercury News, Arysta Lifescience, the makers of the fumigant, announced on Tuesday evening that they’d be suspending sales of the product (also known as Midas) in all U.S. markets.

In California, where methyl iodide was being slowly phased into use as a replacement for the ozone-depleting methyl bromide, farming communities have spent the year protesting. Several Central Coast counties even banned the chemical, which is used to sterilize the soil before strawberries and other high-dollar row crops are planted. Amy Yoder, head of Arysta LifeScience North American, was sufficiently vague when speaking to the San Jose Mercury News about the company’s withdrawal, and she said the company’s decision was based “on its economic viability in the U.S. marketplace.”

It may have also had something to do with the fact that California Gov. Jerry Brown has recently appointed Brian Leahy, a former organic farmer, as the head of the state’s Department of Pesticide Regulation. Or the fact that, just a month into the job, Leahy authorized a half-million dollar project to explore less toxic alternatives to fumigants. Adding to the strikes against Arysta, Pesticide Action Network (PAN) also announced yesterday a new round of evidence that a pesticide called Chloropicrin, which is used in conjunction with methyl iodide, had been found in the air in every site they tested near the farming operations conducted by Driscoll’s, the nation’s largest strawberry distributor. The press release read:

“This study illustrates how readily fumigants can move away from where they are applied at levels that can have serious health impacts on neighbors,” said Dr. Susan Kegley, consulting chemist for Pesticide Action Network. “Methyl iodide evaporates even more readily from soil than chloropicrin does, and used in conjunction, these two fumigants will pack a carcinogenic punch that no one should have to tolerate.”

It’s too early to know what Arysta’s decision will mean for California’s conventional strawberry farmers, who produce the popular fruit for around 80 percent of the nation, and are just this month beginning to harvest their first crops of the season. Although methyl bromide has been officially phased out of use, many farmers still have what is called a critical use exemption, meaning they can prove that “the specific use is critical because the lack of availability of methyl bromide for that use would result in a significant market disruption and there are no technically and economically feasible alternatives or substitutes available.”

In other words, the loophole is big enough to plant a field of strawberries in. And it may now be years before methyl bromide is truly, completely phased out. But, considering what a well-documented danger methyl iodide posed to farm communities, methyl bromide may be the lesser evil for the moment.  Not only is methyl iodide listed as a carcinogen on the state’s own Safe Drinking Water and Toxic Enforcement Act of 1986, but, according to PAN, it is also a source of thyroid toxicity, neurotoxicity, and reproductive toxicity.

Either way, we may soon see an end to the era of cheap, conventionally grown strawberries and the often wasteful behavior that comes with them, like this jaw-dropping 2010 video of a Florida strawberry farmer plowing under half his crop for the year because the market was flooded.

At the moment, however, I’m thinking of the high school I visited last fall in the midst of the Monterey County strawberry fields, where teachers and students were working furiously to have their concerns about the carcinogen heard by the outside world. Many of the kids in that area are the children and grandchildren of farmworkers, and I have no doubt they’ll have challenges ahead of all kinds. But for now, they have one less thing to worry about.