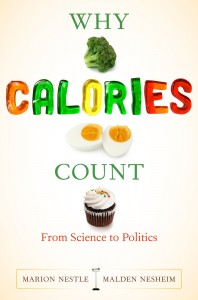 Dr. Marion Nestle and Dr. Malden Nesheim’s Why Calories Count: From Science to Politics, is not a diet book selling you on the newest trend nor does it encourage you to count calories. Instead it does the seemingly impossible: It takes calories from the abstract to the concrete. Nestle and Nesheim explain the significance of the calorie not only in understandable scientific terms, but also in social terms with the explicit aim of helping their reader navigate the convoluted world of food labels and diet fads.

Nestle and Nesheim address frequently asked calorie-related questions like: Is there such a thing as negative calories and are some calories good and others bad? Chapters titles like “What is a Calorie?” belie the complex nature of the subject, but despite their respective PhD’s in molecular biology (Nestle) and nutrition (Nesheim) they manage to make the science of the calorie a personal and ultimately relatable subject.

And, not unlike Michael Pollan’s “Eat food. Not too much. Mostly plants.” mantra, Nestle and Nesheim leave us with four simple charges when it comes to calories: “Get organized. Eat less. Move more. Get political.”

I spoke with Nestle about her motives behind writing the book, the impossibility of estimating calories by sight, and the reason she got into this field in the first place.

Why did you decide to write a book about calories?

Well actually this came through an invite from the University of California Press. I wish I could say it was my idea, but it wasn’t. My editor at UC Press took me to lunch at one point and said he wanted me to do two things—one was to update Safe Food (2003) and the other was to write a book about calories. I thought it was a brilliant idea. It was so current since nobody seems to know what to do about obesity and there are huge debates about what you’re supposed to eat to maintain a healthy weight. There’s so much misunderstanding with calories especially since, as we say in the book, you can’t see them, smell them, or taste them.

What was the aim of Why Calories Count?

As we say in the introduction to the first chapter, if you just stay with the science, it will pay off later on. Because if you understand the stuff in the beginning [the history and the science] all the rest of it, all of the arguments about diet make sense and you can evaluate it on your own. We were trying to empower people to interpret the food environment around them. We don’t think you need any complicated explanations for weight gain beyond extra calories 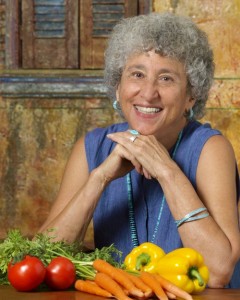 You and Malden Nesheim collaborated on an earlier book called Feed Your Pet Right (2010). Since you’ve decided to tackle another project I assume you must work well together…

Yes. I knew that this book was not something I was going to be able to do by myself because the scientific background that’s needed to understand this goes really deep and the thought of reviewing all of that stuff on my own gave me a headache. So I asked Mal to help me and he agreed. Our strengths complement each other really well.

You write that the book explores calories through science and politics. Why both?

We thought that if people were going to understand what’s out there in society then they need to understand the science. If people want to manage their weight they need to learn how to manage the environment and that’s not so easy. I used to see this in our department at NYU when we were still in the space with the kitchen. There was food around all the time. Every new member gained weight and they had to learn how to manage it. Because it is a Nutrition Department everyone did learn how to deal with it, but it required a lot of thought to figure it out.

What calorie-related questions do you get most often?

People always ask us if we count calories. Absolutely not. I think you have to work with portion sizes. The other big question that everyone has is does it matter what you eat?  The answer is yes and no. Strictly for weight gain it’s no. Strictly for health yes. But if you are eating a healthy diet it is so much easier to control your weight.

One of my favorite examples of underestimating calories in restaurant food in the book was from an anecdote you tell about a New York Times reporter taking you and several other nutritionists out to lunch and asking you to estimate the number of calories in your dishes. Despite the fact that you were all nutritionists, you still found it hard to estimate the calories in the food and ended up underestimating by about 30 percent.

It’s impossible to estimate. It was inconceivable to me that a little dish of risotto had 1,200 calories—how is that possible? I was on an airplane with a bunch of chefs the day the article came out, which was quite humiliating. The chefs said I obviously didn’t know anything about being in a restaurant kitchen and they were right.

Let’s talk about the increase in portion sizes.

Once you get used to large portions you cant go back. People feel like they’re cheated. Mini bagels are the size of bagels I grew up with and mini muffins are the size of what a normal muffin used to be. Larger muffins have more calories, sometimes many more. I don’t think it’s anything more complicated than that.

I once went to a meeting of restaurant chain owners and said that I would really like them to give a price break for smaller portions. They said, “what are you trying to do put us out of business?” For them it’s a matter of life and death. Large portions sell.

You briefly mention the controversial front-of-package nutritional labels in the book. Do you support any version of these?

Oh no. I’m on record that there shouldn’t be any labels or health claims on the front of packages at all. If there has to be one then I would advocate for calories of the whole package. Calories-per-serving is a huge source of confusion.

In the introduction you call yourselves “consummate foodies,” which is not a label people necessarily associate with nutritionists…

My love of food is the reason I go interested in all of this. In High School a friend of my mother’s was a cookbook collector and oh how I wish I had her collection. She told me if I liked food then I should study it. But the options then were either agriculture or dietetics and since I’m a city girl [Nestle grew up in New York City] I never considered agriculture. It took me decades to find out how much agriculture had to do with what we eat on a daily basis.

So I went to Berkeley as a dietetics major and lasted exactly one day. It was not a happy experience for me.  I ended up being a science major and didn’t get back to food until many years later when I was given a nutrition course to teach. It was like falling in love. I was in a biology department and I could see that it was the perfect way to teach undergrad bio. Cell biology made everyone’s eyes glaze over, but nutrition made everyone perk up and start talking. I loved that you could go from science to politics in just one lecture. Everything you were doing in the science department was reflected in the culture and society. I figured that out on the first day I was doing research for the course and I never looked back.