So Will That Be the Wild or Patented Salmon? | Civil Eats

So Will That Be the Wild or Patented Salmon? 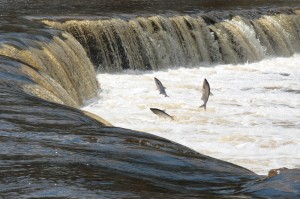 It looks like 2012 will be the year of two salmons: one a genetically altered “Frankenfish” currently under review by the Food and Drug Administration, and the other an inhabitant of one of the world’s last great wild salmon runs, which is unfortunately situated atop a whole lot of copper and gold deposits.

Our first salmon represents a giant step into the unknown of genetically engineered organisms. AquaBounty, a company originally incorporated to produce antifreeze, is trying to get FDA approval of its very own patented salmon species called “AquAdvantage.” If approved, the purportedly sterile, all-female salmon would be the first-ever market-approved, genetically engineered protein to reach our dinner plates. But in the absurd world of engineered food, the FDA is not reviewing AquAdvantage salmon as “fish,” rather it’s being studied as a “new animal drug.” A new animal drug–sorry, “fish”–that wouldn’t require labeling on grocery shelves or menus.

Three consumer groups–Food and Water Watch, Consumers Union and the Center for Food Safety–recently submitted a petition calling on the FDA to reclassify the genetically altered fish so that it undergoes a more rigorous review process. Even the current Congress has taken note, with at least 30 House members and 14 senators having written the Obama administration expressing serious concerns about the FDA’s review of AquAdvantage salmon, in some cases calling for the outright prohibition of its approval for human consumption.

In a hearing last December, Four Fish author Paul Greenberg told a Senate subcommittee that “This fish is not worth the risk. We would be better pursuing a course of truly sustainable aquaculture and better management and use of our wild fisheries.”

Which brings us to our second salmon of 2012, one that swims wild and free but faces a big crisis in Southwestern Alaska. Several mining corporations think that Bristol Bay, home to the world’s largest wild sockeye salmon run, would be a great place to hollow out what would be one of the largest open-pit mines on the planet. In digging out deposits of copper and gold, the Pebble Minecomplex would require an immense containment pond to hold up to 10 billion tons of mine waste, all held back by nine miles of dams reaching up to 740 feet high. For perspective, the Hoover Dam is 726 feet high and a relatively meager 1,200 feet wide, so we’re talking potentially 40 Hoover Dams stretching across the Alaskan wilderness.

This risky development would straddle two of the Bay’s most important salmon streams and, just to keep things really interesting, sit on top of a seismically-active zone. And the Pebble Mine may be just the start of much more mineral excavation in the region, because the massive investment in infrastructure that the mine would require–roads, pipelines, a shipping port–will likely lead to even more mining proposals. Proponents of course cite the new jobs that the mine would create, about 1,000 long-term jobs according to the Pebble Partnership, while perhaps conveniently ignoring the thousands of local jobs already supported by the sustainably-managed salmon fishery in the region–jobs that could be put in jeopardy if the project is approved.

The Pebble Mine’s future may be decided this summer. Congress will conduct hearings on the project by June, while an alliance of sportsmen, Alaska tribes, native corporations, commercial fishermen and even chefs from across the country are petitioning the Environmental Protection Agency to invoke its Clean Water Act authority and protect this important salmon spawning and wildlife habitat.

So, 2012, which salmon will it be for dinner: wild or patented? That depends on whether we decide if protecting one of the last wild stocks trumps the profit potential (for a selected few) that gold and copper mining presents. It also depends on whether we think allowing genetically modified fish on grocery shelves is acceptable, despite not fully understanding the health and environmental costs. Which do you prefer? We know what sounds good to us.

Peter Hanlon is a Senior Research and Policy Analyst for the GRACE Communications Foundation, which builds partnerships and develops innovative media strategies that increase public awareness of the relationships among food, water and energy. Read more >