Going Undercover in the Belly of Our Beastly Food Chain 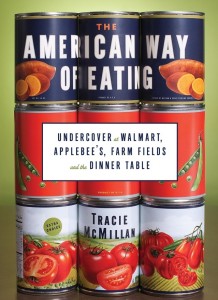 Tracie McMillan’s The American Way of Eating: Undercover at Walmart, Applebee’s, Farm Fields and the Dinner Table takes us on a vivid and poignant tour of a place we don’t really want to go: the mostly hidden, sometimes horrible world of the workers who form the backbone of our cheap, industrialized food chain. Sound grim? It is, at times, but McMillan’s lively narrative and evident empathy for the people she encounters make her sojourn into the bowels of Big Food and Big Ag a pleasure to read.

From the fields of California’s Central Valley to the produce aisle of a Michigan Walmart, and lastly, the kitchen of a Brooklyn Applebee’s, McMillan gives a firsthand account of the long hours, lousy wages and difficult conditions that are par for the course in these places. This is tricky terrain for a white, relatively privileged, middle-class American woman, and McMillan navigates it with grace and humility, remaining acutely aware of the pitfalls inherent in such a project.

I sat down with McMillan recently to chat about her populist odyssey and found her to be just as down-to-earth and plucky as her prose.

What was the hardest part of going undercover?


This was the first time I had gone undercover to do work like that, because I believe very strongly in the importance of being upfront with people about what you’re doing and who you are and I am not a good actress (laughs). So the place where I was culturally the least good of a fit, in the fields, I was really protected by the fact that I didn’t speak the language. I just seemed like a kind of dumb white girl, and that was really helpful.

The first thing was getting over my anxiety over doing that kind of project and coming to terms with it. It meant that I had to be dishonest with my coworkers. I don’t really care so much that I’m not honest with the companies. It’s very interesting, the same year that I was working at Walmart during the holiday season, Stephanie Rosenbloom at the New York Times went and worked for a day at a Walmart with the company’s permission, and she had a very different experience than I did.

And that’s why you do it. Companies and supervisors do not treat you the same, and coworkers won’t be as honest with you, or as open. I’ve come out of this very convinced that undercover work is worthwhile, but it’s a complicated thing. There’s a tendency to think “I can totally do this, and how else can I get this information?” but I also understand why people react badly to it sometimes.

So there was the undercover thing, and then there was finding the right balance between my narrative and talking about the people I was with. It’s not supposed to be about me as a white girl having that experience; the idea is that I can only tell my story and what I observed, but I’m using that to get to the stories of the other people around me.

You found that farm work in California’s Central Valley was extremely demanding, sometimes dangerous, and routinely underpaid. What do you think it would take to provide the people who pick our crops with better working conditions and paychecks that don’t deliberately shortchange them?

They complained about it outside of work, we’d talk about how bad the wages were and the women were like, “Why don’t you say anything?” For me that was really awkward, because I wanted to say “That’s terrible, and I will march off and I will fix everything!” Which is not something you can do as an undercover reporter.

Even if you’re undocumented, you still have legal rights, but they don’t necessarily know that. And even the ones that do, it’s not like they have a guaranteed job, you could be hired or fired at any moment. There’s no job security. So, you keep working, and at least you have the stability of knowing that you will get your eight hours of work for which you’re paid $25 to $40.

How do you fix that? You enforce the existing labor laws. You don’t necessarily need new ones. I think it’s important not to stifle businesses’ ability to do their job, but I did observe when I was working in the fields that every week I was asked to sign a piece of paper stating that I had taken food safety training that I had never taken. One of the arguments around food safety is that farmers should be allowed to self-regulate that. I saw in my work that self-regulation wasn’t working.

And in terms of labor law enforcement, you need some sense that people are going to get in trouble if they cheat workers. The average fine levied under the Agricultural Worker Protection Act is about $350. During my time in the fields I was underpaid by about $500.

A farm advocate in Ohio explained to me that it’s cheaper to violate the law and pay when someone complains than it is to follow the law.

Can you even imagine how different conditions would have to be for it to not be an anomaly to have someone with your own background choosing that kind of work?

That’s called unionization and massive social change! Factory work in the early 20th century was really dangerous and it didn’t pay very well, but those became really good jobs because there was unionization and legislation to protect workers. My grandfather raised my mother and her two brothers and took care of my grandmother on the salary he earned working for Ford.

So, if you could figure out a way to make farm labor a better job in terms of wages and working conditions, more people would do it. The reason why people don’t do farm labor isn’t because they’re, like, “Oh, we’re too good to be in the fields,” it’s because it’s really hard work that often doesn’t pay minimum wage. Picking up garbage is a shitty job, too, but people still go do that, because it’s a decent gig.

What were your most miserable moments?

This belies my upwardly mobile aspirations (laughs). For me, what was the most emotionally miserable was working the night shift at Walmart. I didn’t see any daylight for the most part. That’s also really physical work, so I would move half a ton of sugar and a half ton of flour in a night, by myself. It’s isolated work, you’re in an aisle stocking by yourself, so there’s no social aspect to it.

But what I found most draining about it was that most of my coworkers, many of whom were married and had families, had been there for seven, 10, 15 years. One coworker was earning $11 an hour after working there for seven years, and she talked about how if you worked at Walmart for 15 years that’s actually really good because you get a lifetime discount card.

There’s something really sobering when what you’re aspiring to is that if you stick it out at $10, $11, $12 an hour you’re going to get a lifetime 10-percent discount card.

Walmart keeps touting its commitment to fresh healthy produce, but in your experience, they treated fresh fruits and vegetables just like any other non-perishable consumer good. Their blasé attitude toward the fresh produce engendered so much waste! How do you square that with their famous obsession for maximizing profit?

I was really shocked to be working at Walmart and to see how inefficient the place I was working was. I have no idea if that department was just an anomaly, or if that’s a broader problem.

Randy, the manager, was incredibly young, didn’t really know what he was doing, and didn’t particularly care. For that, I would fault the store management. It’s one thing to be really bad at your job, but why did somebody give you that job?

What was really upsetting to me was that one of my colleagues, I think I call him Sam in the book, who’s a black man, he had come to Walmart after the grocery store he worked at closed down. He had been working in produce for five years and knew a lot, so I could ask him anything, like “How do I tell if this is ripe?” Sam had applied for that job and they had given it to Randy instead. I have no idea who on the planet would have picked Randy over Sam, because Sam knew produce, whereas Randy had a background in electronics.

You write, “When cooking instruction is paired with basic nutrition education, Americans cook more and eat more healthfully–even when money is tight.” What’s your prescription for battling kitchen illiteracy?

Almost everything people are eating at home involves some degree of convenience foods. That kind of thing usually tends to have a lot of salt and preservatives in it. But it’s actually no more time-intensive to do a Hamburger Helper kind of thing from scratch, and it’s actually cheaper.

The thing that sucks about a box isn’t that it’s quick–it’s that if you don’t already know how to cook, you think you can’t make a cake without a box. We need to start thinking about cooking as a basic life skill, not something that’s optional. Incorporating that into public education to me seems like a smart idea. It can be a really great way to teach people other stuff. It’s great for math, right? And for reading comprehension. Or learning to write recipes. It’s an important survival skill.

I think one of the things you can support, no matter what your politics are, is that our schools should be teaching our kids how to be self-sufficient, how to take care of themselves and not to have to depend on large institutions. I would include in that not just government but also corporations.

We don’t want to be raising kids who depend on corporations to tell them what to eat and how to eat. That’s a really important part of American culture. People talk all the time about a nanny state, but there’s the corporate nanny, too. And I don’t like that either! If we want people to be self-sufficient, cooking and eating is a part of that. So, we need to include cooking as part of public school education. I also understand fully the difficulty of educational reform, but I think it’s an important point to start discussing.