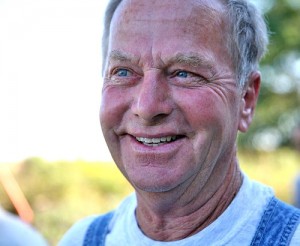 The name Paul Willis is pretty much synonymous with sustainable pork production. In the mid-1990s, Willis teamed up with Bill Niman to develop the Niman Ranch Pork Program and bring flavorful, antibiotic-free pork to market. If you aren’t familiar with it, the program is actually quite different from the way most hogs are raised and sold in this country in that it sources from family farms, raising hogs on pasture or in deep-bedded systems.  I was fortunate enough to meet up with Paul for a pleasant conversation at the lovely 18 Reasons space in San Francisco’s Mission District to learn more about his farm, the Niman Ranch Pork Program and his recent trip to Capitol Hill.

In the early 1990s, Willis was raising about 2,500 pigs a year on his family’s farm, all out on pasture.  There were very few options for selling pastured pork at the time, but he believed strongly in raising pigs in as natural environment as possible. As a result, he doesn’t use gestation or farrowing crates and his animals are never fed sub-therapeutic antibiotics or growth hormones. Willis doesn’t dock his piglets tails or clip the ends of their teeth. He believes that he and other pork producers should be able to select the hog breeds that are best suited for their farm and be paid a fair price, based in part on the eating quality of the pork they raise.

Willis’ production methods and philosophies are in sharp contrast to the factory hog farms that are now fairly prevalent in Iowa. In a factory hog farm (also known as a CAFO), the animals are raised indoors in a large, warehouse-like building. Growing pigs are raised in group pens and pregnant and nursing sows are often confined to gestation or farrowing crates. The animals have no ability to express their natural tendencies to root or forage and the stress of confinement in such crowded conditions often leads to the development of neurotic coping behaviors.  The animals are fed a diet of grain and protein, often mixed with sub-therapeutic antibiotics to prevent illness.

If this sounds quite unappealing to you, it did to Willis as well. “All I had to do was go in to a CAFO once to realize I wanted no part of that,” he said. “If you had to raise animals like that, I didn’t want to do it.”

Willis quickly realized that the many logistical hurdles of getting animals to the processing plant and meat to market were often what kept family farmers out of the pork supply chain. When the Niman Ranch Pork Program was first getting started, there were few options for hog farmers outside of the highly concentrated hog production and pork processing industries. The large-scale producers and processors aren’t very interested in buying from farmers who raise “less than a truckload” worth of animals and they pay less for hogs raised outdoors as opposed to indoors. In the mid-1990s, hogs raised on pasture or in deep-bedded systems were being docked about $17 per “hundredweight” or $17 less per every hundred pounds of pig by conventional buyers. The average market hog weighs about 250 lbs., so a farmer could expect to receive about $42.50 less per animal if she raised her hogs outside.

By starting the Niman Ranch Pork Program, Willis set out to address these aggregation, processing, marketing and distribution barriers, or to serve as the “to” in “farm to fork” for small-scale producers. With programs like Niman Ranch and other niche marketers, small-scale producers can raise hogs outside on pasture or in deep-bedded systems and receive a premium for their good animal husbandry and care for their environment, instead of being penalized. In addition, consumers get more flavorful pork, raised without sub-therapeutic antibiotics or growth hormones. 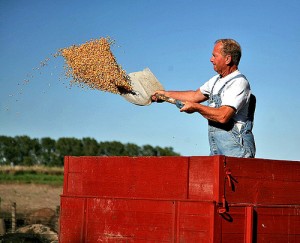 Attention Washington: “We can do this”

Willis was recently on Capitol Hill, testifying to Congress about the use of antibiotics in animal agriculture.  He was there in support of Rep. Louise Slaughter’s (D-NY) bill The Preservation of Antibiotics for Medical Treatment Act.  His message to Washington was, “We can do this. We can raise pigs without sub-therapeutic antibiotics.”

You’ve probably heard a lot of fuss from the conventional hog industry that the world will starve to death or farmers will all go broke if they can’t routinely feed antibiotics to animals. But that simply isn’t true. Farmers and ranchers are perfectly capable of raising animals without sub-therapeutic antibiotics and many, like the producers in the Niman Ranch Pork Program, are making their living doing just that. As a result of their program, Willis has even seen a reversal of the usual exodus in rural communities. Instead of leaving the farm, the sons and daughters of Niman Ranch producers are getting involved and staying in the family business. The average age of a Niman Ranch hog farmer is 47 years old, which is ten years younger than the average American farmer.

So, listen up, Congress! Public health, the environment, and a whole crop of new, successful, pasture-based farmers demand that you keep antibiotics working for humans and stop routinely feeding them to animals.

What can consumers do?

As Willis and I were wrapping up, I had one more question for him. I seek out pasture-raised, antibiotic-free meats at restaurants and grocery stores and am often disappointed by the lack of options. There is currently much more consumer demand for antibiotic-free meat than supply, so what can we consumers do if we want to see an increase in these products? Keep asking for it, says Willis. Continue to increase awareness and demand. If restaurants, grocery stores, your local caterer, etc. keep hearing that you want antibiotic-free meats, that could justify the slight price increase that would be necessary to get more producers involved. Willis said that if, “we could pay our farmers another $0.10 cents/lb. live weight [about $25 per animal] that would make a difference.” To me, that means eating less meat so I can afford to pay for higher quality products and demanding antibiotic-free options.