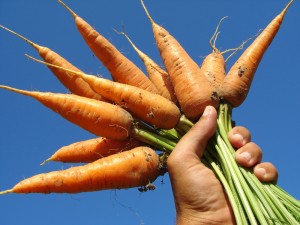 We are not out carrying banners and marching on Wall Street, we are on the land, in our fields, planting seeds, cultivating crops, nurturing livestock, harvesting the food that nourishes a nation.

There are far more people in prison than growing our food, more stockbrokers and lawyers than those of us who feed our neighbors. We are the 2 percent we call farmers.

There is nothing more central to our lives than how we secure our food. Yet the responsibility for this has been almost entirely handed over to someone somewhere else, to an industrial system where farms have become factories and food has become a faceless commodity. The results have been disastrous; epidemic levels of childhood obesity and diabetes, food that no longer tastes good or is good for you, polluted groundwater, soil loss at staggering rates, and most profound; an almost complete disconnection from the social, cultural, and ecological relationships that were once part of agrarian life.

One percent may control our economic wealth, but the true wealth of a nation may be in the fertility of its soils, the quality and security of its food, the health of its communities.  This kind of national wealth cannot be brought to us by Cargill or Monsanto or Dupont, the corporate giants who now drive the industrial machine that brings us industrial food; it will have to come from individuals and families, neighborhoods and communities.

When the food system no longer fulfills the needs of the people, whether for economic or distribution reasons or because of concerns for food safety, or simply because people want corn that tastes like corn, or potatoes that are more than just a tasteless medium to convey ketchup and salt to their mouths, they take that responsibility back into their own hands.

This movement is taking place in the most unlikely of places, on abandoned lots, on rooftops, in schoolyards, at farmers markets, in home kitchens and around the table, at community food events, and in the fields and orchards of those who are rediscovering the sacred art and craft of growing food.

Awareness around food and it’s place in our lives, and the incredibly precarious nature of the system that brings it to us, is growing. Language that many of us have been using for decades is now part of the public lexicon. Everyone seems to be talking the talk.

But talk is cheap and while there is an overwhelming embrace of local food and agriculture, there is an enormous chasm between those who eat well and locally and can afford to do so, and those who cannot. The nutritional divide has never been greater, the number of hungry people in the world growing at staggering rates.

How is it possible that there is such an uprising of people who are passionate and enthusiastic and inspired by the new food movement and yet so few whose hands are actually in the soil doing the work?

In the end there is not so much a food crisis as there is a crisis in participation.

The real shift we need cannot take place when only two percent of us is doing the work to grow the food for the rest, while everyone else is cheering us on. We love the attention, but farming is not a spectator sport.

So make friends with a farmer, you’re going to need them. For I am certain that as the current global industrial experiment continues to unravel, agriculture will once again return to its rightful place; to the heart, the center of our society.

The leadership that is going to make this happen will have to come from focusing not just on the disparity in economic wealth, but the disparity in social, ecological, nutritional and agricultural wealth as well. To reclaim these things will require that we wrestle control away from the corporations and bring it back home into our kitchens, our schools, our neighborhoods and homes.  Join the February 27th global initiative to Occupy our Food Supply. Participate in the movement to regain control over what goes into our bodies, our food, and the earth which we all depend on.

The Occupy Movement has reminded us all of the economic disparity that exist in our world, and for this I sincerely thank them. But if we are going to focus on what we are for, as much as what we are against, we should occupy our land, re-occupy our soils with life and fertility, our communities with good food. We can march on Wall Street, or we can continue to work quietly and diligently in rebuilding the real economy, the one based on soil and sunlight and communities working together to grow food.