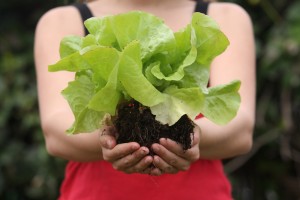 Today, February 27, is an Occupy Our Food Supply day of action. The following essay is just one of several related posts that will be appearing online to mark the day.

The biggest corporate takeover on the planet is the hijacking of the food system, the cost of which has had huge and irreversible consequences for the Earth and people everywhere.

From the seed to the farm to the store to your table, corporations are seeking total control over biodiversity, land, and water. They are seeking control over how food is grown, processed, and distributed. And in seeking this total control, they are destroying the Earth’s ecological processes, our farmers, our health, and our freedoms.

It starts with seeds. Monsanto and a few other gene giants are trying to control and own the world’s seeds through genetic engineering and patents. Monsanto wrote the World Trade Organization treaty on Intellectual Property, which forces countries to patent seeds. As a Monsanto representative once said: “In drafting these agreements, we were the patient, diagnostician [and] physician all in one.”

They defined a problem, and for these corporate profiteers the problem was that farmers save seeds, making it difficult for them to continue wringing profits out of those farmers. So they offered a solution, and their solution was that seeds should be redefined as intellectual property, hence seed saving becomes theft and seed sharing is criminalized. I believe that saving seeds and protecting biodiversity is our ecological and ethical duty. That is why I started Navdanya 25 years ago.

Navdanya is a movement to occupy the seed. We have created 66 community seed banks, saved 3000 rice varieties, stopped laws that would prevent us from seed saving, and fought against biopiracy.

Corporations like Monsanto have created a seed emergency. This is the reason I am starting a global citizen’s campaign on seed sovereignty. I hope you will all join. The lawsuit that 84 organizations, including Navdanya, have filed against Monsanto in New York through the Public Patent Foundation is an important step in reclaiming seed sovereignty.

The next step in the corporate control of the food supply chain is on our farms. Contrary to the claims of corporations, the chemical-based “green” revolution and genetic engineering do not produce more food. Navdanya’s report on GMOs, Health per Acre, shows that the GMO emperor has no clothes. Biodiverse organic farming protects nature while increasing nutrition per acre. We have the solutions to hunger, but it’s not profitable for major industrial agriculture companies like Monsanto and Cargill to implement those solutions.

Cargill, the world’s biggest grain giant, wrote the WTO’s agriculture agreement, which has destroyed local production and local markets everywhere, uprooted small farmers, devastated the Amazon, and speculated on food commodities, pushing millions to hunger. A global corporate-controlled food system robs farmers of their incomes by pushing down farm prices, and robs the poor of their right to food by pushing up food prices. If a billion people are hungry today, it is because of greed-driven, capital-intensive, unsustainable, corporate-controlled globalized industrial agriculture. While creating hunger worldwide, agribusiness giants collect our tax money as subsidies in the name of removing hunger.

This system has pushed another 2 billion to food-related diseases like obesity and diabetes. Replacing healthy, local food culture with junk and processed food is achieved through food safety laws, which I call pseudo-hygiene laws. At the global level these include the Sanitary and Phyto-sanitary agreement of the WTO. At the national level they include new corporate-written food safety laws in Europe and India, and the Food Safety Modernization Act in the U.S.

The final link in the corporate hijacking of the food system is retail giants like Wal-Mart. We have been resisting the entry of Wal-Mart in India because Big Retail means Big Ag, and together the corporate giants destroy small shops and small farms that provide livelihoods to millions.

We have alternatives that protect the Earth, protect our farmers, and protect our health and nutrition. To occupy the food system means simultaneously resisting corporate control and building sustainable and just alternatives, from the seed to the table. One seed at a time, one farm at a time, one meal at a time–we must break out of corporate food dictatorship and create a vibrant and robust food democracy.

Learn more about the Occupy Our Food Supply day of action, sponsored by Rainforest Action Network. Find an event near you or follow the action all day on Twitter.

Before becoming an activist, Dr. Vandana Shiva was one of India’s leading physicists. She holds a Master’s degree in the philosophy of science and a PhD in particle physics. She is the director of the Research Foundation on Science, Technology, and Ecology, the author of many widely-translated books, and a leader in the International Forum on Globalization, along with Ralph Nader and Jeremy Rifkin. Shiva is also the founder of Navdanya (“nine seeds”), a movement promoting diversity and use of native seeds. Read more >