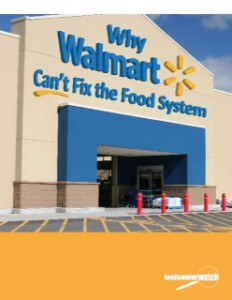 To divert attention away from its human right abuses and otherwise abysmal image that was deflating its bottom line, Walmart made a lot of lofty promises over the past couple years, including: run 100 percent on renewable energy, buy more produce from local farmers, and to open 300 stores in food deserts. Because of these public relations campaigns, some have started to look at the retail behemoth as a potential ally and are wondering how to harness Walmart’s power and influence to fix our broken food system. However, looking to Walmart to fix anything will not work, because Walmart is part of the problem, not the solution.

Walmart’s success is not just because of its size but is the result of several very specific factors in its business model. In addition to being fervently anti-union, Walmart’s logistics and distribution model is much different from other companies. Essentially, Walmart’s model boils down to sucking money out of the supply chain.

Walmart bases its logistical operations on shifting costs and responsibilities to suppliers. Walmart is so large that food processors cannot refuse demands that Walmart makes upon them. With Walmart as their biggest customer, suppliers have no choice but to comply. When Walmart makes a decision to change the way it does business, an entire industry will shift to keep up. And despite what Walmart would have the public believe, this decision is made with profits in mind. The company continually puts downward pressure on its suppliers, forcing them to cut costs. The company’s model drives consolidation; takes money away from farmers, workers, and processors; and pushes agriculture to get more industrialized.

Walmart size enables it to exercise an unprecedented amount of power in all sectors of the economy, and food is no exception. When there is one player this large connecting food producers and food consumers, consumers are no longer the food industry’s customers–Walmart is. Walmart is so powerful that we can’t look to the government to keep Monsanto’s genetically engineered sweet corn out of our grocery aisles. We have to instead address what would ultimately be GE sweet corn’s biggest customer: Walmart.

Walmart is all about improving the bottom line, so it must continue to open new stores to increase sales. Since Walmart has already saturated rural and suburban areas, the only option left is to move into cities. However, Walmart has come up against organized resistance from urban communities. The various initiatives it has undertaken to ‘address’ nutrition and food access are nothing more than publicity stunts designed to improve their public image and thus lower resistance to plans for expansions. Plus, the company makes its suppliers pay for any sustainability or packaging changes while Walmart gets to reap the benefits to its public image. The latest goal of opening Supercenters in food deserts is just one more ploy to reduce resistance to its plan to move into urban areas.

As consumers and policy-makers continue to be bombarded with PR messages about Walmart’s efforts to help people live better, it is time to look at the impact that Walmart’s rise has had on our food system and to reconsider whether the Walmart model has any place in trying to fix it.

Tyler Shannon is a researcher for Food & Water Watch and focuses on a wide range of issues including factory farming and corporate control of the food system. He has a B.S. in Computer Science from the University of Puget Sound, and a J.D. from The George Washington University Law School. Prior to joining Food & Water Watch, Tyler was a research associate with the United Food & Commercial Workers where he worked on CAFOs and the meatpacking industry. Read more >