Inside One Corporation’s Decision to “Go Humane” | Civil Eats

Inside One Corporation’s Decision to “Go Humane” 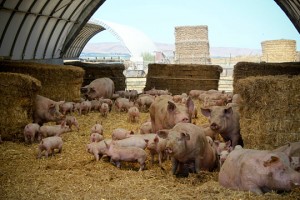 I manage supply chains for Bon Appétit Management Company, which is another way of saying that my job is to think about chicken and pork. Not just the meat, but the lives of the animals themselves. I suspect there are few other non-meat-eaters whose corporate roles require them to think about farm animals as much as mine does.

But thinking about production systems and negotiating with suppliers can only go so far. Today, we’re saying that we’re fed up. Bon Appétit Management Company today announced that by 2015 all our pork will be sourced from companies that don’t use gestation stalls–the densely packed metal cages that imprison pregnant sows in spaces so tight they can’t even turn around. Imagine hundreds of 200-pound dogs confined that way all day, every day, and it should be easy to understand why this system is so egregious.

We also announced that in addition to our shell eggs, which have come from farms Certified Humane by Humane Farm Animal Care since 2005, all of our eggs will meet that standard or those set by other credible certifiers. That includes eggs that are separated from their shells, known as “liquid eggs,” which are commonly used in very busy restaurant kitchens like ours. (You try cracking eggs for 2,000 people daily!) Liquid eggs, after all, come from laying hens just as shell eggs do, and we believe that the 67-square inches a battery cage affords each hen is simply unacceptable.

We are the first and only food service company to make such a serious commitment. And we’re not just raising the minimum standards of what we’ll accept in the way of pork and eggs, we’re also raising the ceiling. We’re committing that 25 percent or more of all our animal proteins will be the most humanely raised possible—not just cage- and crate-free, but also raised without subtherapeutic antibiotics and hormones, and allowed to engage in their natural behaviors. We won’t rely on producers to reassure us, but on independent, third-party-certified labels.

So why does “going humane” keep me up some nights?

The true answer, perhaps paradoxically, is that there isn’t a ready supply today of gestation crate-free pork or Certified Humane liquid eggs that we can buy. We’re going to have to catalyze sources to live up to our commitment.

And I work for a very impatient boss. Fedele Bauccio, Bon Appétit’s CEO, served on the Pew Commission on Industrial Farm Animal Production a few years ago and came back from site visits around the country complaining about how factory farming made him sick. I wanted to phase in this policy over five years, but he wouldn’t hear of it. He made it a companywide commitment to start now.

With pork, we really have our work cut out for us. Several big companies have announced plans to phase out gestation-stall confinement systems by 2017, but at least one buys most of their meat from the open market, so their claim of changing what they produce is pretty shallow. Another owns and operates production facilities in states with regulatory mandates that could be reversed in the wake of a recent Supreme Court decision.

A third company sent their CEO and a squad of senior executives to our offices to demonstrate their commitment to humane and environmentally responsible practices. After months of talking, we made little headway on developing a supply chain. As big as our demand is–over 800,000 pounds of bacon alone per year–that company processes so many hogs that they couldn’t separate the products they might raise humanely for us from their massive supply of other pork products. How would we know we’re making good on our commitment if they couldn’t track what they were selling us?

There are some fairly responsible, smaller regional producers whose names you might recognize from high-end supermarket meat cases. Some are certified by credible third-party agencies to distinguish themselves from other producers, but others spin aspirational tales — and their shortages of certain cuts are legendary.

I’m frustrated but not discouraged. If these questions had easy answers, our problems would have been solved already. The failures to develop a national supply chain have given me insight on better questions to ask and partners to identify.

I’ve learned, for instance, that most pigs are raised by quasi-independent smaller producers, not corporate-owned hog farms. These guys have made capital investments in these hideous confinement technologies and it will take serious money to make changes–the kind of capital that isn’t readily available unless their giant corporate pork-contract holders extend them credit to make changes.

I’ve also learned that Bon Appétit needs partners such as supermarkets and upscale fast-food operators, because we primarily use different cuts of pork. We can’t have humane systems for our bacon, pork chops, and sandwich meat without finding partners for the carnitas shoulders and Easter hams. They all come from the same animal.

Much as I hate to admit it, we actually need the big producers in this mix. Many people deeply believe that our food system would be vastly improved if we just went back to our agrarian past of small farmers. Yet that’s not how most people are going to feed themselves. It’s too expensive, at least for the foreseeable future.

Our role, as a company that serves 135 million meals a year, must be to put significant pressure on the big producers who currently feed the 300 million Americans—and others—to improve what they do.

Good animal welfare isn’t just about the animals. It’s about starting to dismantle a system that has enormous costs for our society, including the loss of medically important antibiotics, the pollution of our air and water from animal waste, and horrible working conditions in factory farms.

So we are announcing a commitment—even though the products we need aren’t produced in the quantities we need. Why? We’re convinced of one thing: The best chance for change is to stop waiting for everyone else to make the first move. We’re committed to shifting production practices in the marketplace one way or another.