Cultivating A Movement: A Living History In Santa Cruz 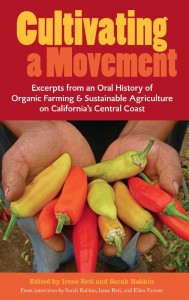 Oral history is a tool for conveying first-hand experience and sharing knowledge. It also provides a medium to weave experiences together, crafting a whole patchwork of personal stories into a larger history. The 29 oral history excerpts in the recently released, Cultivating a Movement: An Oral History of Organic Farming & Sustainable Agriculture on California’s Central Coast, capture the integral 40-year history of the organic movement in Santa Cruz and its rippling effect onto the rest of the world. As part of the Regional History Project set in motion by the University of California, Santa Cruz, this curated anthology defines an organic food revolution. And according to forward, written by Linda L. Ivey, Ph.D., the organic movement is indeed a revolution: “a historic shift in the way a society operates within its natural environment.” Twenty-nine voices attest to the large-scale shifts in cultural, economic, societal, and environmental practices by explaining their strategies for navigating a sustainable way of life.

“It was quite difficult to design the order of the book,” says co-editor Irene Reti. “At first we considered creating sections for Farmers, Researchers, Educators, etc. but most of the narrators fit into more than one category–you can’t put them in a box!–so that wouldn’t work. So we realized we needed to come up with a more subtle structure.”

The structure is almost seamless and moves from chronological pioneers of organics like Betty Van Dyke, Andy Griffin, and Jim Cochran to some relative newcomers, or second wave farmers like Dee Harley. There are also excerpts from ALBA farmers like Maria Ines Catalan, “the first Latina migrant farm worker to own and operate a certified organic farm in California and the first Latina in the country to found a farm that distributes produce through a community supported agriculture program (CSA).”

Perhaps the most recognized names in the bunch are the policy makers and activists: Mark Lipson, the first paid staff member of CCOF; Congressman Sam Farr, who with Lipson, helped to pass the 1990 California Organic Foods Act which created standards for what became the federal National Organic Program; Bob Scowcroft, founder of the Organic Farming Research Foundation; and Tim Galarneau, co-founder of the Real Food Challenge.

Voices of educators, writers, and thinkers supplement the activist within this oral history. These are the people that are creating change in thought, bringing us to a place where wider conventional beliefs are being re-examined and moving us toward a more ecological way of thinking. Steve Kaffka, manager of Alan Chadwick’s legendary Farm and Garden, and Sean Swezey, a heavy hitter within organic farming research and an expert entomologist and integrated pest management specialist map the shift in paradigm: “In the late nineties or early in this century, we crossed a threshold where the organic research legitimacy struggle was won and now the task is creating a strong body of scientific literature to substantiate the claims of organic farming,” Swezey explains.

The lives of these dedicated voices are diverse—their current projects range from digging in the soil to work in Washington, D.C.—but not surprisingly, many in the bunch grew up farming or in a rural setting.  Their interviews are filled with descriptive memory, scenes of happy childhoods in the dirt and sensory examples of what grew around them. There were several people who described what it is like to watch rural land turn into urban sprawl, a big influence in choosing a path that tends to preserve our natural environment. But regardless of the roots of how their stories began, there is a cohesive discussion about the importance of sharing knowledge, community, and ultimately, the responsibility of the history we create.

Many of these people influenced each other too, sharing experiences in the same places and learning skills that led to innovative models within the food system. If I have one critique of Cultivating a Movement, it is also why I like the book so much: the scope is local and specific to Santa Cruz. I love that the people in these pages are the ones I see at my farmer’s market, or pass on Highway One, or even share food with at a potluck from time to time. But there is still much to learn from the Central Coast voices and their stories which capture the activity of an organic movement that is itself a living history.

*If you do live around Santa Cruz or happen to be in the area, there will be a reading at Bookshop Santa Cruz on February 22, 2012 at 7pm.