Farmers, Seedsmen, Advocates Turn the Tables on Monsanto and Sue 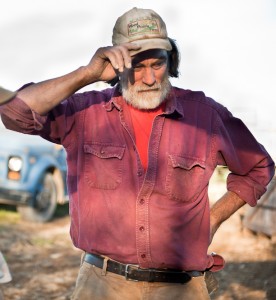 Speaking with Maine farmer Jim Gerritsen recently, just a few days before he was to appear in court, I was struck by how much this likable gentleman–proprietor, with wife Megan, of Wood Prairie Farm in Bridgewater, sounded more like an ambitious and idealistic community organizer, aiming to grow a fair and democratic agricultural system, than a man who’s spent the last few decades building a reputation for productive, delectable spuds. He’s begun to find a receptive audience. Last autumn the Utne Reader–long considered the Reader’s Digest of the alternative press–called him “one of 25 visionaries changing the world.”

This lawsuit is an “attempt to come up with a strategy to protect family farmers in this perverse situation we find ourselves in,” said Gerritsen, “Whereby our crops can become contaminated by Monsanto’s transgenic seed, and beyond losing the value of our organic or non-genetically modified (GMO) crops, we’re placed in the position of having to defend ourselves from a Monsanto-initiated patent infringement lawsuit. We need protection from the courts to prevent that injustice.”

I asked him to elaborate.

“It’s a preemptive lawsuit filed under the Declaratory Judgement Act, which allows people who are fearful of sometime in the future being sued, to petition the court for protection, in this case from their GMO contamination. We want them to keep their pollution on their side of the fence…we shouldn’t have to defend ourselves in court because of their trespass,” he said.

According to the complaint against Monsanto filed by the Public Patent Foundation (PUBPAT), a non-profit, public interest legal group representing the plaintiffs in this case, the biotechnology behemoth’s aggressive, litigious behavior in protecting its seed patents over the years has forced the plaintiffs to take legal action.

The suit states that “roughly 500 farmers are investigated [by Monsanto] for patent infringement each year. Between 1997 and April 2010, Monsanto filed 144 lawsuits against farmers in at least 27 different states” for alleged patent infringement and/or the breach of its license to those patents. Additionally, the complaint documents Monsanto’s pattern of “investigation, accusation, and litigation” against other farmers who neither wished to possess, nor be contaminated by Monsanto’s GMO seed.

One case cited in the lawsuit and presented by the plaintiffs as indicative of Monsanto’s hyperactive legal strategy involved Indiana farmers, David and Dawn Runyon.  The Runyons became widely known after being featured in a CBS Evening News report in 2008, and then again in the popular documentary released the summer of 2009, Food Inc. In their case, according to a CBS transcript, “The Runyons charge bio-tech giant Monsanto sent investigators to their home unannounced, demanded years of farming records, and later threatened to sue them for patent infringement.”

The only problem was the Runyons never purchased Monsanto seed, never signed any agreement to grow the company’s GMO soybeans, and never gave permission to anyone from Monsanto to take samples of the Runyons’ soybean crop. Monsanto at one point sent the family a letter claiming to have an agreement with the Indiana Department of Agriculture allowing the corporation to take samples from the Runyon farm, although the agency did not exist at the time the letter was sent. Monsanto now states it has declared the Runyons “ineligible to purchase our technology.”

On January 31, lawyers for both sides of the Organic Seed Growers & Trade Association, et al. v. Monsanto case presented oral arguments before the court on a pre-trial motion by Monsanto to dismiss the lawsuit. The attorney for Monsanto, Seth Waxman, argued the farmers and other plaintiffs lacked a valid reason to fear being sued, as it was not a “ubiquitous threat,” ignoring the “intimidation effect” of the corporation’s litigiousness, according to the plaintiff’s attorney, Dan Ravicher of PUBPAT.

Farmer and OSGATA chief, Jim Gerritsen, commented after the day’s proceedings that it was that kind of intimidation which organic and non-GMO farmers needed protection from. “We have farmers who have stopped growing organic corn, organic canola, and organic soybeans because they can’t risk being sued by Monsanto. It’s not fair and it’s not right.”

In our conversation earlier, Gerritsen expressed his optimism about the case, citing a number of events worldwide which, he argued, heralded a dramatic shift in public opinion around the issue of GMO foods–a recent unanimous vote in Peru for a ten-year moratorium on GMOs; French President Nicholas Sarkozy’s public commitment to place new restrictions on GMOs in France; the Label GMOs initiative in California, for which supporters will soon begin gathering signatures; and finally the Occupy movement, which he believes has irrevocably altered the whole conversation around food and democracy.

“I think the Occupy movement has been recognized by Americans to be asking the right questions,” he said. “The polls that I’ve read suggest a majority of Americans support raising issues of corporate control over our government and economy being out of control, and that power needs to shift back to the people. I think it’s creating an atmosphere where we’re not satisfied with just maintaining a status quo that is working against the people. There is no human-created institution which can remain standing when the people stand united in opposition to it.”

Judge Naomi Buchwald has promised to rule on the motion to dismiss the lawsuit by March 31.