Monsanto’s New Seeds Could Be a Tech Dead End 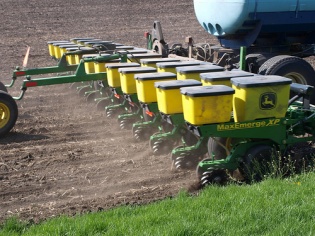 And I’m not talking about Monsanto’s recently approved “drought-tolerant” seeds, which the USDA itself has observed are no more drought-tolerant than existing conventional hybrids.

No, the “exciting” new seeds are simply resistant to more than one kind of pesticide. Rather than resisting Monsanto’s glyphosate-based Roundup alone, they will now also be resistant to Dow AgroScience’s pesticide 2,4-D.

“A new pesticide,“ you say. “How exciting!” Except 2,4-D, despite its catchy name, has been around since World War II. Not only is it one of the most commonly used pesticides in the world, but it came to further prominence in certain circles when it was incorporated as a main ingredient in Agent Orange.

Indeed, as with research into new antibiotics, research into new—potentially safer—pesticides has come to a virtual standstill. Like the drug pipeline, the pesticide pipeline has run dry. Instead, biotech companies are going back to the older, more toxic chemicals, like 2,4-D, for inspiration.

And while you’d expect opposition to these new products from the likes of Tom Philpott of Mother Jones or Doug Gurian-Sherman of the Union of Concerned Scientists, one place you might not expect to see it is the pages of the influential, peer-reviewed journal BioScience.

And yet there it is! Led by David Mortensen, a team of scientists from Penn State, Montana State, and the University of New Hampshire published a paper that describes the effects on agriculture from an over-reliance on glyphosate and an overuse of Monsanto’s genetically modified seeds. It also discusses at length the risks of using new seeds that “stack” resistance to various pesticides into one genetically engineered package.

In short, they say that you can’t believe Monsanto and Dow when they hype gyphosate resistance plus 2,4-D resistance as two great tastes that taste great together. The two companies are promising to eliminate the growing superweed menace—the one that has caused farmers to abandon thousands of acres of prime farmland and to return to older, more toxic pesticides to protect their crops.

What these scientists conclude is that with so many weeds resistant to glyphosate already, it won’t take long for them to develop resistance to 2,4-D as well.  According to the study’s authors, almost half of the nearly 40 species of weeds that are already resistant to two pesticides have arisen since 2005 (i.e. since the Roundup Ready era began). In short, the crisis Monsanto and Dow are promising to head off is already here.

There are other problems with 2,4-D, such as a strong link to cancer and a much greater tendency to drift on the wind (and thus contaminate nearby fields and waterways)—problems that the development of the less toxic, less volatile glyphosate was supposed to have “solved.” Yet now, thanks to Big Ag’s over-reliance on these genetically engineered one-hit wonders, which encouraged farmers to use too much glyphosate too often, we’re back to square one—or rather to square toxic.

There is, however, an alternative—and one that doesn’t require a total transition to organic agriculture (not that there’s anything wrong with that!). Mortensen and his team describe in detail a practice called Integrated Weed Management (IWM). Like its sibling, Integrated Pest Management (IPM), IWM does involve the use of chemical pesticides. But it’s a judicious use that can act as a last resort rather than a first line of defense. As the paper states:

IWM integrates tactics, such as crop rotation, cover crops, competitive crop cultivars, the judicious use of tillage, and targeted herbicide application, to reduce weed populations and selection pressures that drive the evolution of resistant weeds.

It’s designed for production agriculture and would most likely increase farmer profits, since farmers would get the benefit of reduced seed and pesticide costs and no real loss of productivity. But, as with the climate-friendly agriculture I discussed the other day, you’re unlikely to see IWM embraced by Big Ag any time soon.

The USDA, along with the entire large-scale agriculture economy, is built around the profits of pesticide and biotech companies. You need only watch the USDA approve new genetically engineered products—which the agency admits represents a threat to other forms of agriculture—to see how deep in the tank to these companies our government is.

Tom Philpott observed that with this latest development, agriculture is at “a crossroads.” I disagree. I would say that if the USDA approves this new multiple pesticide-resistant GMO seed as it’s expected to, large-scale agriculture in the country will have reached a true dead end.