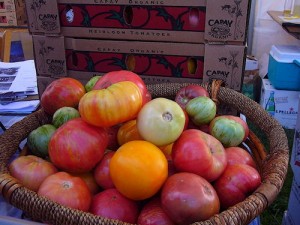 “Heirloom” is an interesting term, and like the word “sustainability,” it means different things to different people. Recently, I read The Heirloom Life Gardener, a book written by Jere and Emilee Gettle. The Gettles are the co-founders of the Baker Creek Heirloom Seed Company, which publishes a lush and incredibly informative seed catalog and has spun off a variety of gardening-related enterprises across the nation.

The Gettles define heirloom seeds as being “nonhybrid and open-pollinated” and as usually having been in circulation for more than 50 years. Some heirloom seed types currently in use could have been found in Thomas Jefferson garden at Monticello. Some appear more recently, during the Great Depression, including the Mortgage Lifter tomato (who couldn’t use one of these in today’s economy?).

While reading the Gettles’ book, I began thinking once again about the relationship between land and the American character. I was inspired to pull some of my favorite books off the shelf and revisit them, to consider the notion of “civic agriculture.”

The civic aspect of agriculture is much older than the current local food movement; it hearkens back to the nations founding. The connection between land and democracy has always held real meaning in American culture. Jeffersonian ideals about the civic virtues and value of gardening and agriculture were prevalent and shaped American cultural and political life; the U.S. Department of Agriculture, created in 1862, was called “The People’s Department” by President Abraham Lincoln. Lincoln once told a group of Wisconsin farmers that as long as Americans knew how to cultivate even the smallest plot of land, that the nation’s citizens would be free from kings and moneylenders, free from oppression of all sorts.

Federal legislation such as the Morrill Act (The sesquicentennial is in 2012) created America’s land-grant institutions, which still have as a primary purpose research and education in support of the nation’s agricultural producers. (Land-grant institutions through their Master Gardener programs also support home and community gardeners). The Homestead Act, also passed in 1862, and linked the cultivation of land to the protection of the Union and the expansion of democracy during the nation’s Civil War. We were a nation of farmers at origin; we are still a nation of farmers at heart.

You farm, and we garden. Gardening links the myth and the practice of agriculture to one another. In practice, gardening is agriculture on a personal scale; it represents an individual’s relationship to a specific piece of land. This is a kind of relationship worth investing in.

As you formulate your goals and hopes for the New Year, I hope that you’ll consider adding another resolution to your list: to embark upon a gardening activity, no matter how small, in 2012. Occupy the possibilities that gardens create at our homes, and in our communities.