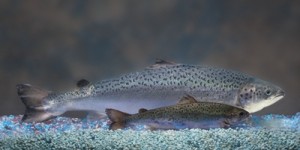 On Monday afternoon a coalition of 11 food safety, environmental, consumer and fisheries organizations sent a letter to the U.S. Food & Drug Administration (FDA) calling for a halt to its approval of a genetically engineered (GE) salmon after learning that the company’s–AquaBounty Technologies, Inc.–research site was contaminated with a new strain of Infectious Salmon Anaemia (ISA), the deadly fish flu that is devastating fish stocks around the world.

“This new information calls into question the reliability of AquaBounty’s data and the validity of its claims that their fish are safe for the environment” said Andrew Kimbrell, Executive Director of the Center for Food Safety. “The FDA must respond appropriately and conduct their own environmental impact statement that looks at a broad range of environmental risks from these genetically engineered salmon, including the risk of spreading diseases such as ISA and antibiotic use for other diseases.”

AquaBounty has claimed that the company’s process for raising GE fish is safer than traditional aquaculture.  However, documents that were revealed last week indicate that their production site was found by Canadian Authorities to have been contaminated in Nov. 2009.  This information was hidden from the public and potentially FDA and other Federal agencies consulting on the GE salmon application. ISA is a deadly disease and is classified as a ‘Listed’ disease by the World Organization for Animal Health (OIE)–alongside diseases such as Anthrax, Bovine spongiform encephalopathy (BSE), Foot and mouth disease, rabies, sheep pox, swine fever, avian influenza, West Nile fever, scrapie, fowl cholera, bovine tuberculosis and myxomatosis.

“Infectious Salmon Anaemia threatens wild fisheries around the world and the communities whose livelihood depend on those fish” said Erich Pica, President of Friends of the Earth US. “ISA infections in Chile cost the industry around two billion dollars. A similar infection in Canada and the U.S. could be the last blow to wild Atlantic salmon populations and bring a collapse in wild salmon fisheries.”

The December 19 letter urged FDA Commissioner Margaret Hamburg to release all health data on AquaBounty’s GE salmon and to suspend any approval actions until all the data is disclosed and the public has an opportunity to review the data. Additionally, the coalition asked the FDA to conduct a full environmental impact statement that includes review of the effect of fish diseases, like ISA, on wild fish populations that might come into contact with the AquaBounty fish. Currently, the FDA has only performed a less comprehensive environmental risk assessment.

This news comes on the heels of a Senate subcommittee hearing held last Thursday on the environmental risks of GE fish, the first hearing of its kind in Congress.

Originally published on the Center for Food Safety’s blog

Jaydee Hanson works as a policy analyst for the Center for Food Safety on issues related to nanotechnology, animal cloning and animal genetic engineering. He also works for the Center’s sister agency, the International Center for Technology Assessment (ICTA) where he directs their work on human genetics, synthetic biology and nanotechnology. He is the US co-chair for the Nanotechnology Taskforce of the Transatlantic Consumers Dialogue and a fellow of the Institute on Biotechnology and the Human Future. Read more >