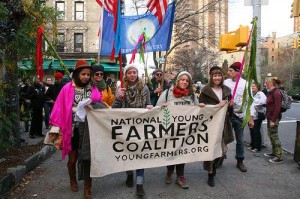 Farmers have been through this before–our lives and livelihoods falling under corporate control. It has been an ongoing process: consolidation of markets; consolidation of seed companies; an ever-widening gap between our costs of production and the prices we receive. Some of us are catching on, getting the picture of the real enemy.

The “99 percent” are awakening to the realization that their lives have fallen under corporate control as well. Add up the jobs lost, the health benefits whittled away, and the unions busted, and the bill for Wall Street’s self-centered greed is taking a toll.

It’s not the immigrants, the homeless, the unions, or the farmers that have looted the economy and driven us to the brink of another Great Depression. The public is catching on.

Change can come only when you confront your oppressors directly on their turf. That makes them uncomfortable, it gets attention, and it wakes up the distracted public.

The Occupy movement is doing exactly what the prominent student activist Mario Savio spoke of in 1964, when he declared: “There comes a time when the operation of the machine becomes so odious, makes you so sick at heart, that you can’t take part, you can’t even passively take part and you’ve got to put your bodies upon the gears and upon the wheels, upon the apparatus and you’ve got to make it stop–and you’ve got to indicate to the people who run it, the people who own it, that unless you’re free, the machine will be prevented from running at all.”

The people who are now forming a movement to occupy the food system agree with this sentiment too.

The food system isn’t working. People eat too many calories, or too few. There’s too much processed food on our plates. Too many Americans lack access to food that is fresh, nutritious, and locally grown. This is the food system that corporate America has given us. It’s the food system it’s selling to the rest of the world.

Clearly, this system doesn’t have the best interests of the public at heart. Nor does it consider the interests of farmers or farm workers or animals or the environment. It has one interest: profit.

We all have to wake up.

Farmers need access to farm credit, a fair mortgage on their land, fair prices for the food they produce, and seeds that aren’t patented by Monsanto or other big corporations. Consumers need to be able to purchase healthy and local food, and to earn a living wage.

The parallels are pointedly exact. It may be the Wall Street banks that are controlling our lives, or it may be Monsanto, Cargill, DuPont, Kraft, or Tyson’s. The system isn’t working.

Why do agribusiness profits continue to grow while farmers struggle to pay their costs of production and more Americans go hungry? We can’t feed our people if we are forced to feed the bank accounts of the one percent.

Agribusinesses insist that we have the responsibility of feeding the world. Growing more genetically engineered corn and soy isn’t going to feed the world, nor will it correct the flaws in our food system; clearly it has created many of them.

The world can feed itself, without corporate America’s science-experiment crops and expensive chemicals. The world’s people can feed themselves if we let them–if we stop the corporate land grabs and let them develop their own economies for their own benefit.

The message from the Occupy movement needn’t and shouldn’t be a specific set of demands. It should be about asking the right questions.

Wall Street, the government, and corporate America need to answer one basic question: Why did you sell us down the river?

*Editor’s Note: Please join us at Kitchen Table Talks in San Francisco this Thursday to discuss the Occupy movement.