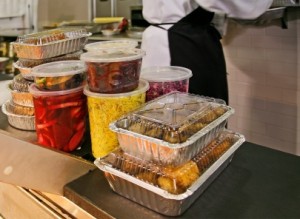 I’ve long believed that chefs can radically reduce food waste by planning better, prepping less food, and donating leftovers, in that order. Other strategies, such as “tray-less dining,” help in “all you care to eat” settings, such as college dining halls. I recently decided to put my beliefs to the test. In doing so, I realized the limitations of my good intentions and how tough it can sometimes be to put ideas into practice.

I attended a chefs’ competition–a real one, without squadrons of makeup artists, predetermined “secret” ingredients, or unseen hours of washing and prepping ingredients–for Bon Appétit Management Company chefs. This semiannual Northern California Chefs Exchange started at 7 a.m. with a butchery demonstration, followed by a farmers’ market trip and then a tutorial on artisanal tofu making. By noon, the 32 chefs I accompanied on their morning journey were as hungry to compete with each other as they were to eat each others’ creations.

Divided into four teams, they plotted their themes and dishes. Then, over the course of two hours, they conquered raw ingredients, including a whole lamb, crisp Warren pears, and yuba, the top skin of tofu that resembles flat noodles when cut into strips. They chopped, peeled, strained, grilled, baked, and composed dishes consistent with the Moroccan, Pan-Asian, California Comfort, and Street Food themes they chose. The pace was frenetic and the kitchen, designed to accommodate only eight chefs, was loud. My role as photographer was about as welcome in a busy kitchen as a salmonella virus.

Finally, at 2 p.m., the teams presented their dishes and the four judges (including me) sat down to nibble critically. The standouts were a panini of braised chanterelles; chevre and bits of tender lamb; and a soup with house-made long noodles, mushrooms, five-spice pork, and tofu.

My last duty of the day was to deliver the leftovers to a homeless shelter. Having previously seen half-platters of beautiful food scraped into compost bins, I added this feature to this season’s competition. Knowing it was being donated, the chefs carefully collected the remaining morsels. My trunk was filled with 20 bags of freshly prepared vegetables, tofu, more tofu, and whole grain salads, each weighing perhaps a pound on average, and breakfast items. For a short moment in time, my car smelled great.

When I finally found the unmarked shelter under a freeway overpass, I knocked on the door and two workers, expecting me, came outside. First, they inspected the goods. Pastries? You bet. Orange and red vegetables? OK–they weren’t green. Tofu? Detecting suspicion, I gave them the option to pass. They did.

The next day, I spoke to the agency director who had recommended that shelter. In her many years of experience, she said, she’s learned that cultural divisions matter–a lot. I was frustrated with myself for not having said in advance what types of food I anticipated having left over, and for assuming there would be equal parts meat, starches, and vegetables–sort of a mini–Thanksgiving feast. But there never is. All of the meat dishes and platters of dark greens had been devoured, leaving a surfeit of squashes, an assortment of grains, and soy products. I made a second drop that day to an agency serving elderly Asian-Americans, hoping the tofu would be prized instead of feared. It was, but not until it was carefully inspected, a practice that would make some volunteers hesitate to do this again.

Food waste happens, especially when feeding a crowd. Fewer guests show up at events than expected, an inexperienced chef or host that genuinely wants to demonstrate generosity orders far too much food. But donating leftovers has its complications too, even with the best of intentions at play. Most agencies want familiar food, not “fancy food.” And like the rest of the population, they want meat. For those of us on the giving end, it’s important to experience our embarrassments–and get over them. Reducing food waste is critically important for humanitarian and environmental reasons, but donating prepared food has its challenges. Perhaps this means we need to work harder at not having so many leftovers in the first place.