Exposing the Shame: A Critical Look At Farm Worker Housing 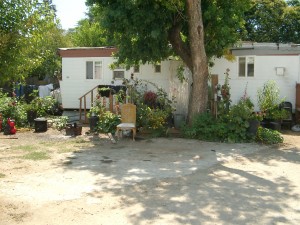 There is a sense of pride in this trailer park and the public spaces surrounding the trailers are, for the most part, pleasant, and clean. But it’s clear that the trailers are old and in some cases unsafe. In fact, there are a couple of trailers that have collapsed and are sitting in place with the contents extruding. This is home to a community of farm workers and their families just outside of Stockton, California.

In this site, the residents own their own trailers. When compared to many other U.S. farm workers, they are a lucky group. All across the country farm workers face housing challenges. For those who care about a sustainable food system, understanding where the workers who produce your food live and supporting policies to abolish substandard conditions for workers is essential.

At the trailer park in Stockton, trailers had had no gas to operate stoves and hot water heaters for over 45 days. In some cases, residents were building fires outside to cook and heat water for washing. The septic systems from several of the units had failed and leaked sewage onto the ground outside. According to several long-term residents, the management routinely breaks promises to improve services. The health department and building inspectors appear blind to violations. But, according to residents, the sheriff remains at the ready for evictions. Trailer owners are reluctant to withhold rent for their lots and are also unwilling to complain to county officials because they fear their trailers will be condemned and they will lose their investment and homes.

Another example of farm worker housing in the Stockton area is an urban squatter camp beneath an underpass between a low-income neighborhood and an industrial zone. Situated 15 feet below the grade of the street the makeshift shacks are hidden from view. The water source for the residents of this camp is a leaking valve that has been tapped and is being piped into an open hole in the ground. It’s not clear how many people live in this camp but many of the residents work in nearby farm fields.

There is a marked absence of current, scientifically rigorous research to inform policy aimed at developing strategies to provide safe and affordable housing for foreign-born U.S. farm laborers. In fact, in California, where a majority of U.S. farm workers live, there has been no statewide survey of farm labor housing conditions and certainly no thorough investigation of farm labor housing has been completed nationally. Evidence shows that the current farm laborer population differs significantly from the population for whom housing policy was created.

Recent Economic Research Services assessments of hired farm workers reveal a higher proportion who are undocumented and foreign-born than in the past. In addition, the majority of these workers are “settled” workers who do not migrate with the crops. “Follow-the-crop” migrants, for whom most housing policy is devised, actually comprise less than 12 percent of this workforce. According to the Farm Labor Survey, between 1950 and 2006, the number of family members working on farms declined, while the number of hired farmworkers per farm increased.

The federal Migrant and Seasonal Agricultural Worker Protection Act requires that each person who owns or controls housing specifically provided to migrant farm workers must ensure that the facility complies with the federal and state safety and health standards covering that housing. Migrant housing may not be occupied until it has been inspected and certified to meet those standards. So, regulated migrant housing tends to be of high quality.

Here is the current state of farm worker housing programs in some major agricultural states taken from data supplied by the respective state housing agencies.

Currently, there are 24 public migrant housing centers in California exclusively reserved for the use of families, with no provision whatsoever for unaccompanied workers. Typically open for only six months during the local peak agricultural season, these labor camps altogether provide housing for 1,903 families. Prospective residents must have traveled at least 75 miles from their permanent place of residence and meet strict low-income requirements. Most centers are under the administration of a county housing authority.

The exclusion of unaccompanied and undocumented workers from the units that were built or rehabilitated with federal funds indicates that the vast majority of today’s migrant farm laborers are ineligible for public housing. Despite substantial increases in farm labor employment and shifts in the regions where workers are needed, the number of facilities in the state have decreased by two since 2000 reducing the number of units by 204.

In Washington, the population of migrant and seasonal farm workers and their family members is estimated at 289,000 individuals in 67,000 farm worker households. Of these, 70 percent live permanently in the state. A study to determine the population of farm workers in each county in the state and the need for housing shows a gap in housing in all counties ranging from less than 1 to 24 percent new units needed. Once the study was complete, the state set about creating a strategy to fund and build the needed units.

In 2003, the Washington State farm worker housing trust, a nonprofit, was formed to address the housing issue. As of 2008, the trust and its housing authority partners working with funding from state and federal programs had developed 1,002 community-based farm worker homes in 34 developments. The Trust continues to work at expanding housing development, developing tools to increase financing through public and private means and supporting local communities to create partnerships among farm businesses, farm worker advocates, affordable housing providers and others to create a more sustainable model for agricultural communities.

There are estimated to be three million migrant and seasonal farm workers at any given time in the United States. According to the Economic Research Service, housing conditions have long been substandard and there has not been any improvement in recent years. Despite an increased demand for hired farm laborers, farmers have become less likely to provide housing for them. The foreign-born share of the U.S. farm labor force has doubled within the past four decades. During that same time period, there has been a substantial decline in employer-provided housing for farm laborers, especially for those employed on a seasonal basis. The factors responsible for this housing decline include an employer response to strict regulations, the increase of farm labor contractors (FLC), and the Latinization of rural America.

Government agencies can encourage the formation of coalitions to develop cooperative housing specifically for the agricultural worker population. Trust funds can be generated in a number of creative ways with funding earmarked for farm worker housing. But a stable, renewable source of funds needs to exist at all levels of government for affordable housing in rural regions. This development will only occur when policy is developed to address these issues. If you care about a sustainable food system, you should care about where the workers who produce your food live. Support policies that work to abolish substandard conditions for workers.

The living conditions faced by farm laborers in the U.S. expose the shame of spatial inequity experienced by rural regions. As long as the people who work in the fields where our food is produced live in unhealthy and unsafe conditions, our food system will never be sustainable.

Gail Wadsworth is the Executive Director of the California Institute for Rural Studies. Read more >