Learning On The Half-Shell | Civil Eats

Learning On The Half-Shell 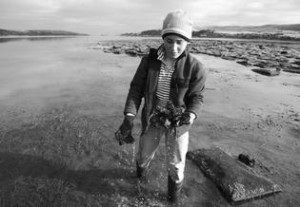 Luc Chamberland thinks oyster farming is often misunderstood. That’s why the aquaculturist wants to educate the public about the benefits of cultivating bivalves in Tomales Bay, a pristine estuary in West Marin, Calif.

A recent, high-profile controversy surrounding a commercial oyster farm in the area has focused on the potentially negative environmental impacts of cultivating oysters (namely disruption to native species). But Chamberland sees oyster farming as a sustainable practice that does more good than harm.

That’s why, a few years ago, he conceived of Pickleweed Point Community Oyster Farm–a kind of CSA for the briny bivalve–so that the public can, quite literally, grow their own oysters, and in the process better understand the critical role oysters play in maintaining a healthy ecosystem.

Chamberland has about 25 participants–some as young as six and some as old as 80–who pay $100 for the privilege of hands-on oyster farming lessons. Each spends an average of eight-12 hours a year maintaining their oyster plot. “If the water is healthy then our oysters are healthy,” he says. “The health department requires frequent water quality testing with oysters, so they’re a great water quality indicator.” Members are shown how to load Pacific oyster “seeds” (young oysters about the size of a penny) into wire-like mesh bags, which are then numbered, tied to a line, and released into the intertidal region of the bay, where waves, wind, and filter feeding are routine.

This oyster farmer was inspired to launch Pickleweed after learning about a similar community farm in Washington. It is a labor of love Chamberland tends to on nights and weekends; he has a day job as a project manager for an oceanographic and wetland restoration company. 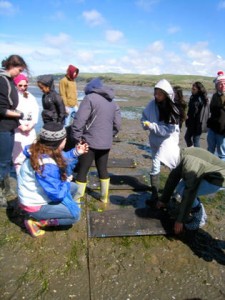 Chamberland also hosts school field trips to the farm for local middle and high school students, organized through the community farm’s fiscal sponsor, The Watershed Project. Chamberland began working with The Watershed Project as a volunteer and was impressed by their native oyster restoration work in the Bay Area. He approached the project for support, as he thought they’d make a good fit for his idea.

The feeling was mutual. “Other farms may give a tour of their facility, but Luc actually wants students to be an oyster farmer for the day,” says Christopher Lim, the Living Shoreline program manager for The Watershed Project. “So he has students take on the tasks an oyster farmer would perform,” Lim says. “He also emphasizes the connection between good water quality and healthy, delicious oysters. And he explains the different methods of oyster farming in the area.”

Chamberland named his latest underwater endeavor for its proximity to vast beds of pickleweed, an intertidal vegetation whose color can change from a deep olive to a radiant purple, depending on the time of day and the season. The 50-year-old French Canadian has been in the oyster business for some time; he was one of the first abalone farmers in the area, and he helped launch Hog Island Oyster Company’s Bar in the San Francisco Ferry Building.As you might expect from an oyster farmer with a restaurant background, Chamberland is as concerned about the taste of his product as he is about water quality. “Just as the grapes that make wine reflect the soil they’re grown in, the same is true for oysters and water,” he says. “Different waters have different flavors. I call this aqua-terroir.” Typically, Tomales Bay oysters have a mild cucumber flavor, firm texture, and a briny finish, says Chamberland, who notes that the bay–surrounded as it is by the Point Reyes National Seashore, a state park, and protected land–makes it an ideal location for oyster cultivation.

Oysters act as a natural, aquatic filtration system: They remove suspended materials in the water, allowing more light to reach submerged aquatic plants such as sea grasses. In turn, these sea grasses provide nursery habitat for a diverse population of fish and invertebrates, Lim explains. Oysters are what’s known as a keystone species; bringing up oyster populations can increase eelgrass and critters that live in eelgrass, such as crabs, worms, and amphipods, which in turn become food for salmon, herring, and birds.

In her book Oyster Culture, Gwendolyn Meyer explores the history of bivalve farming in West Marin and its impact on the social and physical landscape of this timeless, pastoral setting. From her perspective, Pickleweed Point fits in well in an area dotted with mid-sized ranches, dairies, and farms that are popular with local eaters. “This is another opportunity for people who want to get more familiar with their food source,” she says.

Individual members can eat the oysters they grow, but Chamberland doesn’t expect the first substantial community Pickleweed Point harvest until the spring of next year. (He’s in the process of getting certified to handle and sell oysters to the public.) At that point, he estimates around 5-10,000 oysters will be ready, for those who enjoy an icy, sweet-salty hit on the half-shell. He’s also working with The Watershed Project to bring youth from the nearby, under-resourced city of Richmond out to the wilds of West Marin to learn about oysters. “I find youth are fascinated by this kind of water-based farming,” says Chamberland. “I want to give students the opportunity to learn how to be stewards of the environment; the fact that you get to eat the fruits of your labor is a bonus.”