Heritage Turkeys For A New Breed of Eaters | Civil Eats

Heritage Turkeys For A New Breed of Eaters 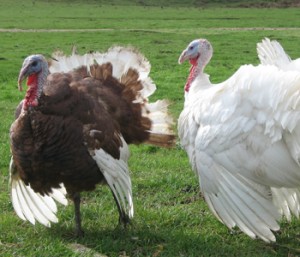 “Heritage” has become a buzzword for discriminating home cooks wondering what bird should grace their Thanksgiving dinner table this season. But while conventional supermarket turkeys cost about $1.50 per pound, heritage turkeys can fetch up to $10 per pound, a considerable price difference that raises eyebrows for many shoppers. So, what’s all the fuss about?

Bill and Nicolette Hahn Niman of BN Ranch in Bolinas, California, have made a point of educating eaters about the value of heritage turkeys, as well as the hidden costs of commodity turkey farming. “I want people to understand the difference and why it costs more,” says Nicolette Hahn Niman, who is also an environmental lawyer and author of the book Righteous Porkchop. “Obviously, they can make their own choice, but it’s an informed choice.”

To understand why heritage birds command a higher price, you have to know that it’s not just a different breed you’re paying for. It’s the additional time and care they take to raise and the fact that heritage turkeys tend to be raised more humanely than conventional turkeys, with space to roam and access to pasture.

According to the USDA, Americans eat about 45 million turkeys for Thanksgiving each year, 99 percent of which are Broad Breasted Whites. These birds have been bred for a heavy breast and rapid growth. As a result, they experience a myriad of health and mobility issues as they mature, including the inability to fly and, in some cases, walk. They cannot mate naturally, so breeders must use artificial insemination for reproduction. In short, if left to nature, the modern turkey would not survive.

Your typical Thanksgiving turkey is raised in a high-density confinement facility, in which it endures overcrowding, poor sanitation, and lack of access to outdoor space. The waste from these industrial operations places a heavy environmental toll on the surrounding landscape. But a growing number of ranchers are raising birds in a more sustainable way. 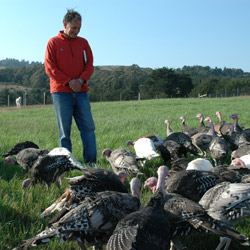 At BN Ranch, the turkeys have room to roam. The Nimans have been breeding pasture-raised turkeys for the last five years, after acquiring heritage stock from Good Shepherd Poultry in Linsborg, Kansas. Their flock consists of Bourbon Red, White Holland, Spanish Black, Narragansett, and Standard Bronze, with a fair amount of cross-breeding. In contrast to the Broad Breasted White, heritage turkeys are older breeds, closer to turkeys found in the wild. They are able to reproduce naturally and are healthier, leaner, and more active birds, well-suited to an outdoor environment.

Norman Gunsell of Mountain Ranch Organically Grown in Calaveras County began raising turkeys at age 15, when his family moved to Mountain Ranch to take over a turkey farm. They raised thousands of turkeys free-range, but, because they were in a contract with a large corporation, they did not control which breeds of birds they raised.

Nowadays, Norman and his wife, Aimee, breed their own small flock of pastured Bourbon Red, Black Spanish, and Narragansett turkeys. The birds coexist with wild turkeys that find their way onto the property. “Our turkeys intermingle with them on occasion, but they prefer to roost in our barnyard every night,” Norman says.

Price vs. Value
Breeding turkeys and raising them on pasture requires more labor and hands-on care, which adds to the grower’s costs. “We’re very intimate with the turkeys throughout their life,” Norman says. (You can learn more about the Gunsells’ turkeys here.) 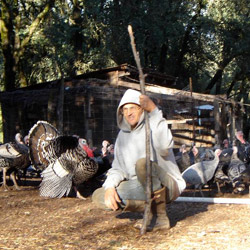 There are additional expenditures associated with raising heritage turkeys. Since traditional breeds grow more slowly than Broad Breasted Whites, they can take twice as long to reach full size, doubling the costs of overhead and feed. In addition, the Gunsells’ birds are certified organic and thus eat only organic, GMO-free grain, which is more than twice as expensive as conventional feed.

Both the Nimans and Gunsells process their birds at small slaughterhouses and opt for air-chilling, a slower (and costlier) but more sanitary process than the chilling baths used by industrial processors. Water-chilling dilutes the meat’s flavor, since water can comprise up to 12 percent of the finished turkey’s weight. In contrast, air-chilling preserves the meat’s richness and makes for better brining.

While health, animal welfare, and conservation are factors for choosing humanely raised heritage birds, for many eaters, the ultimate motivator is taste. “I would say the flavor is richer, and the meat is a finer grain,” says Gunsell. “And they’re juicy and delicious as can be.”

The Nimans realize that not everyone can afford to pay a premium for heritage, so they offer some Broad Breasted Whites, raised the same way as their heritage birds. They’ve witnessed the genetic challenges of these birds first-hand. “We see that these turkeys are not built as well as the heritage turkeys, even when you give then all the advantages of good husbandry,” Niman notes.

As consumer awareness and demand grows, the Nimans hope to focus exclusively on heritage birds. “If you really make good use of the all the meat and bones, it’s not as big an expenditure as it seems,” Niman says. “Think of it as something really special that you’re not going to have every day.”

To find a heritage turkey in you area, check out the Slow Food USA Thanksgiving Guide.

A version of this article originally appeared in the CUESA Newsletter.