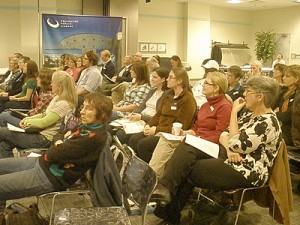 Not a lot of people know much about the Food & Farm Bill, which normally comes up for congressional review and reauthorization every five years. And yet, it is the primary piece of legislation that determines our nation’s food and agricultural policies from production to distribution at an annual budget of $57 billion or $284 billion over five years (2008 figures). In this new era, where citizens have shed their complacency or fear to take on the monolithic structures of government and corporate power, a small group of Kalamazoo, Michigan food activists and professionals have decided to begin studying and understanding the Food & Farm Bill so that they can talk to and influence policymakers, two of whom will play a key role in this year’s appropriations.Michigan Senator Debbie Stabenow is chairwoman of the Senate Committee on Agriculture, Nutrition, and Forestry, which has jurisdiction over agriculture programs, nutrition programs, and rural development. Rep. Fred Upton of the Sixth District (southwestern Michigan), is a member of the Joint Select Committee on Deficit Reduction, a.k.a. the Super Committee, which is charged with issuing a formal recommendation on how to reduce the deficit by at least $1.5 trillion over the next ten years.

The coalition also wants to build a healthier, more food-secure Kalamazoo County by determining what local food-oriented groups have in common and how they can share their resources. Their first meeting was held on Thursday, November 10 at the Kalamazoo Public Library. 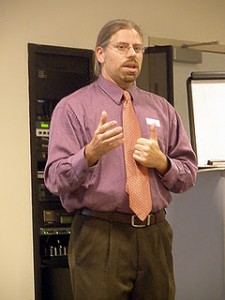 “We want to start a conversation about the Food & Farm Bill regarding its funding, farming, and access policies,” said Chris Dilley, general manager of the People’s Food Co-Op and one of six initiators of the coalition. “It is one of the areas to be reviewed by the Super Committee to expedite the legislative process a little differently,” he said. “It normally takes two to three years to write and appropriate each five-year Food & Farm Bill. “Nearly all of the money under the current 2008 Food & Farm Bill was to be spent on four areas: nutrition (67 percent), farm commodity support (15 percent), conservation (9 percent), and crop insurance (8 percent), according to last December’s Congressional Research Service (CRS) report.

“Several programs are at risk of being cut off in the Super Committee’s deliberations,” said Donna McClurkan, a coalition representative of the Michigan Farmers Market Association. “Nutrition is the biggest chunk and it includes SNAP benefits (food stamps) for poor people. However, access to food is an issue for all people. Conservation is another where we’ll likely see cuts.”

The Food & Farm Bill also determines what food is served in school cafeterias and the level of support farmers receive for sustainable and organic farming, a big issue for the coalition. McClurkan added that the Food & Farm Bill first appeared during the 1930’s Depression to protect farmers, pricing, and land but that it has morphed into providing compensation for commodity crop producers. The 684-page document is very unwieldy to handle so she referred people to two sources that help explain it:

A Web site by Connecting Food and Tech Innovator.

A video with Ken Cook, president of the Environmental Working Group, who discusses how massive subsides are paid to industrial farmers and how citizen groups can help advocate and improve this important legislation.

The group is guided by principles in the Michigan Good Food Charter, which has 226 statewide signatories of organizations and individuals who seek to provide a food system that is healthy, green, fair, and affordable to all. “Michigan is well-poised to influence food and farm policy in this country,” said McClurkan. “It has a rich and diverse agricultural heritage.”

Michigan grows over 150 different crops, second only to California. It has a first-class land grant university, greenhouses, good soil, fresh water, community-supported agriculture (CSA), and small farmers. “This is energy we can rally around,” she said. After a brief overview of the coalition’s mission and purpose, participants were divided into four groups to talk briefly about major aspects of the Food & Farm Bill:  (1) Food System Infrastructure, (2) Local Foods in Institutions, (3) Farms- Resources-Environment-Conservation, (4) Food Access and Vulnerable People.

At the wrap-up it was decided to broaden community participation, plan some public activities, and invite local political officials to its discussions. Other leaders of the coalition included Paul Stermer of Fair Food Matters, Phyllis Hepp of Kalamazoo Loaves and Fishes, Ken Dahlberg of the Michigan Land Trust, Mike Rowe of Bronson Hospital. Among the 45 participants attending were farmers, college students, food advocates, dietitians, food service professionals, MSU Extension, and health care providers.