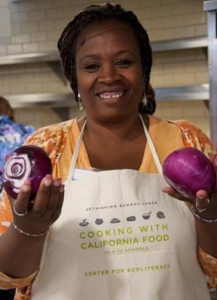 Given all the media attention, you may think that Alice Waters is the only person in Berkeley doing anything to fix school food–and that her Edible Schoolyard Project is the only organization tackling this topic across the country.

But that perception would be wrong. Founded in 1995, the Center for Ecoliteracy has also long championed school food reform and channeled funding in the millions to garden programs, cooking classes, and nutrition-based curriculum in Berkeley public schools.

Along with the Chez Panisse Foundation and Berkeley Unified School District, the Center for Ecoliteracy also implemented the School Lunch Initiative, which kickstarted local, seasonal, and sustainable food for students here and connected the classroom and the cafeteria.

Currently, its Rethinking School Lunch program offers a planning strategy for revamping food service beyond Berkeley to rural and urban areas around the state struggling to improve the eating habits of school children, many of whom are hungry, nutritionally depleted, or hampered by diet-related illnesses such as obesity and diabetes.

Last week, the center introduced school nutrition personnel from around the country to its new cookbook-guide, Cooking with California Foods in K-12 Schools, which played a starring role in a hands-on workshop on creative school lunch menu planning, as part of the national Community Food Security Coalition‘s 15th Annual Conference in downtown Oakland.

On a sunny Sunday afternoon a stuffy, windowless Marriott hotel conference space was packed with about 60 school food folk from both coasts and the country’s center and south, all eagerly drinking the Kool-Aid—sorry, make that freshly squeezed lemon juice with a hint of mint—dispensed by renowned cookbook author, culinary teacher, and food policy consultant Georgeann Brennan and her colleague Ann M. Evans, former Davis mayor, co-founder of that city’s food co-op and farmers’ market, and a long-time advocate of sustainable food systems.

Participants, who left with renewed enthusiasm and ideas to try back at their own schools—along with a free guide and a nifty apron—formed small groups to turn out such salads as zucchini and feta; broccoli, raisin and walnut; tabbouleh; and Asian cabbage and orange with ginger. They also connected with kindred spirits in the school food world while they grated, chopped, and stirred.

Also on hand to talk transforming school food: award-winning Oakland Unified School District Nutrition Services Director Jennifer LeBarre—along with four of that city’s Lunch Ladies who shared stories about the pressing need and formidable barriers to bettering school food, as only those in the frontlines every day can do—and Zenobia Barlow, the Center for Ecoliteracy’s executive director and co-founder.

Barlow isn’t a celebrity chef and she doesn’t own a famous restaurant. Rather, she hails from an anthropology-sustainability-think tank-policy wonk pedigree. And her commitment to improving what children eat at school every day is clear and consistent. “The Center has quietly and steadily worked on improving school food and providing professional development and training to school food personnel for about 15 years,” said Barlow post conference from her office at the David Brower Center. “We helped bring about the changes in school food in Berkeley and we’ve moved on to other schools and districts to facilitate change there too.”

The cookbook is part of this plan. It is based on a simple yet clever 6-5-4 formula that consists of six dishes (salads, soups, pastas, rice bowls, wraps, and pizza toppings), five flavor profiles (African, Asian, European/Mediterranean, Latin American, and Middle Eastern/Indian) and the fresh produce available during the four seasons. The approach was developed in the Davis, Oakland, and Winters school districts over three years.

Funded by TomKat Charitable Trust, the guide’s goal is to help school food service staff find ways to add more fresh, local, healthy foods to school meals (though the downloadable document offers recipes suitable for home cooking too). Some 8,000 guides have been downloaded since August, more than 1,000 have been shipped to school nutrition staff and all 40 copies got snapped up at last week’s workshop, according to Barlow.

Each presenter stressed the importance of integrating California specialty crops—such as walnuts, lettuce, olive oil, strawberries, apricots, figs, citrus and more — into meal programs. “How can we expect our children to understand what food is grown in their area and how it tastes if it’s not on their plate?” asked Evans to a receptive crowd, who also noted California’s long growing season and diverse range of produce not available in most parts of the country.

Attendees from states such as Pennsylvania, Arizona, and Montana raised the challenges they face in sourcing affordable fresh produce at certain times of the year. “California is blessed with great soil and climate and has the capacity to grow for a population far larger than itself,” said Evans. “To share that bounty is great for California farmers and for consumers around the nation. This doesn’t have to supplant local produce in other states, but can compliment it.”

She also noted that schools in as diverse California locations as Davis, Riverside, Ventura, Winters, Santa Cruz, Los Angeles, and Clovis are all early adopters of the 6-5-4 approach to school menus, which allows for substitutions based on availability.

Barlow, who is currently working closely with the Oakland Unified School District, also pointed out the OUSD’s novel approaches to enhancing the edible experience at different sites—like the “Grab and Go” breakfast bags offered at high schools, the grant-sponsored fruit and vegetable snacks for elementary schools, the new supper program recently implemented at some schools, or the more than 20 afterschool farm stands on school grounds in that city, where many children live in food deserts.

“It’s been important to take what we learned in Berkeley and apply it on a larger scale in districts in more urban settings like Oakland, which benefits 40,000 children a year, more than 70 percent of whom are eligible for free or reduced lunch,” Barlow said.

“For some children who are fed five times a day at school, it’s the only place they eat. So we’re applying the best of Berkeley’s school food practices and sharing them with the rest of the state and even the country. This guide is part of the solution to the challenge of reinventing school food.”