Honey Laundering and the Global Marketplace 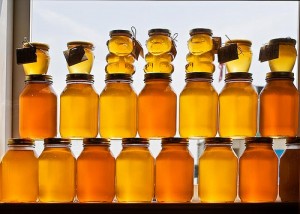 In both the popular imagination and ad campaigns, honey is the epitome of a wild food. After all, bees can’t be herded and overfed like cattle, or immobilized like broiler chickens if they are to continue making the sweet substance. As reported here last year, bees are “a key to global food security” due to their critical importance in food chains worldwide. In fact, honey seems to be a bellwether of global food insecurities.

The “wild” nature of even cultivated honey is both one of its major selling points and the source of many of its problems. A Guardian article recently reported that a European Union court on September 6 ruled that honey containing traces of pollen from genetically modified (GM) corn must also be labeled as GM produce. The ruling comes as a result of beekeepers in Germany discovering traces of corn pollen from a nearby field of Monsanto corn crops. The nature of bee biology and honey production throw the current discourse surrounding globalization and its effect on the permeability of local and global boundaries in a more literal light. After all, bees can’t be herded according to national borders.

Honey and national security are an odd combination, but one of undeniable importance. Colony Collapse Disorder continues to plague hives, causing mass bee die-offs. Last year, although there were rumors that the root cause of the disorder had been found, it is still unclear how much pesticides play a role. As a result, over the last decade these bee die-offs and other environmental factors have increased the price of domestic honey and, as with so many other products, have opened the door to cheaper Chinese imports. This imported honey, however, is often tainted by antibiotics fed to the bees, heavy metals from storage containers, or adulterated with “filler” products such as barley malt and jaggery. The sale of Chinese honey in the United States has been made nearly impossible by staggeringly high tariffs.

A recent Food Safety News (FSN) investigation, however, discovered that “a third or more of all the honey consumed in the U.S. is likely to have been smuggled in from China.” Such a thing can occur because of a number of factors–the cheaper price of Chinese honey and the lack of a legal definition of “honey” among them. Chinese manufacturers pass honey through countries such as Russia, India and Australia in order to disguise the honey’s true country of origin.

However, zero North American packers, five importers, and four beekeeping companies have passed the accreditation process and are now “True Source Certified.” Of course, the American founders of True Source Honey have a vested interest in keeping cheap international competition controlled. Yet I think, in looking at True Source Honey’s web site, what is most surprising is not the comparatively few companies that have gone through its accreditation process, but rather the hundreds of news stories on the site about the company’s milestones, busts of honey launderers, meetings of big players in the honey industry about the issue.

Just this week, FSN reported that more than three-fourths of the honey sold in U.S. grocery stores isn’t exactly what the bees produce, according to testing done exclusively for FSN. FSN reports: “The results show that the pollen frequently has been filtered out of products labeled ‘honey.’ The removal of these microscopic particles from deep within a flower would make the nectar flunk the quality standards set by most of the world’s food safety agencies.”

In a culture plagued by food industry horror stories and bad news, why hasn’t the problem of honey laundering made more of an impact on national media outlets over the course of the past ten years?  Why have they been, with a few exceptions, relegated to local news pieces replete with honey jokes, such as one CityPages blog post that states, “Minnesota beekeepers are so buzzing mad about ‘honey laundering’ that they’re holding a press conference about it today at the State Fair.”

Perhaps one of the reasons honey laundering hasn’t received more national attention is because the problem sheds unwelcome light on so many of the problems faced by current national food security. Honey reveals how something so simple as a name (what one can legally call “honey”) unites issues of international relations, economics at both the global and domestic levels, and biology (how honey is naturally made, and what can be done to bees in order to produce more of it).

Worth considering is the fact that the U.S. often views China as an economic and social threat–while the U.S. is in the process of forging a new, deeper alliance with India. Chinese honey cannot be imported into the U.S., for example, while Indian honey still is (in fact, according to the earlier FSN report, nearly all of honey imported to the U.S. comes from India). Yet Indian honey has already been outlawed in the E.U. because of its equally high level of antibiotics.

Perhaps, as with so many other foods, people must get sick before good health takes precedence over business as usual. The honey laundering issue is not, as some have claimed, just an overreaction to competitive global market practices. It is a case study that, were the world to truly focus on it, would cause us to reconsider many aspects of how global food industries work.