Brazil’s Landless Workers’ Movement in New York: From the UN to Zuccotti Park 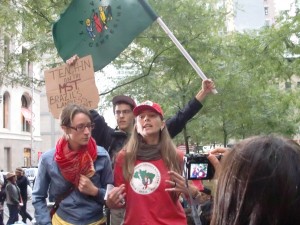 “Occupy, Resist, and Grow!” I found myself shouting into the human microphone at Occupy Wall Street just the other Sunday. I was translating for Janaina Stronzake, a member of Brazil’s Landless Workers Movement–one of the most prominent peasant agriculture movements in the fight for food sovereignty. The crowd repeated, looking to Janaina and then to the depiction of Brazil on her organization’s flag, connecting the dots from there to Wall Street.

The Landless Workers Movement, or Movimento dos Trabalhadores Rurais Sem Terra (MST), is a social movement based on the right to land and human dignity. Founded in 1985, the movement seeks to connect landless rural families with land not in production. The ultimate goal is agrarian reform: Brazil has alarmingly high levels of land concentration, and a simultaneous abundance of latifúndios–large land holdings–sitting unused, almost forgotten. On paper, the Brazilian government is opposed to the hoarding of potentially productive land, and reserves the right to expropriate land deemed not to be fulfilling its “social function”: creating food and livelihoods for the country’s people. But in practice, the status quo is strong. The MST was founded as a call to action.

The MST operates on the basis of land occupation, which in itself represents a long road. When a group of families seeking land through the MST identifies a space, a camp—“acampamento”—is created. Families occupy the land, cultivate crops, and petition the government for the right to stay. Some groups are luckier than others, winning the right to build their homes in the camp, with the blessing of the landholder. From there, schools, fields, and community are born.

But the fight does not stop there. The MST, allied with the global peasant agriculture movement, Via Campesina, also tackles global issues that affect lives on the ground. Janaina’s recent trip to New York served as localized representation. Not only was the city lucky enough to welcome the MST, but the United Nations was also privileged to hear from the movement, as part of a series of talks on World Food Day and the International Day of Rural Women.

And who better to welcome than a leader from one of the world’s most well-known peasant movements? Serving as a panelist on “Food Security: Global Policy and the Grassroots,” Janaina brought the discussion back to its real roots. “Food security is one step–it’s a tactic,” she said in response to UN and FAO representatives’ narrow support of peasant livelihood. “But food security means nothing unless it exists within a framework of food sovereignty.”

As translator for Janaina, I scanned the room and saw most heads nodding in agreement. The MST’s core message was clear: only food sovereignty represents true freedom. Freedom from dependence on corporate technology, freedom for communities to make their own decisions about their crops, and freedom to feed their families how they choose.

Why so much lip service and so little action on food sovereignty? Well, for starters, addressing food sovereignty is much more difficult than addressing food security because it necessarily and fundamentally implies a pivot in priority and practice, especially in the U.S. Food sovereignty, Janaina told the room, is not defined by exporting production technology developed in the U.S. to family farms in rural Indonesia. It is not defined by consolidating ownership of seeds a la Monsanto and selling them back to the very people who once saved seed themselves. Nor does food sovereignty support Wal-mart buying produce from rural Brazilian farmers and then re-selling it, leading money back to the corporation. Food sovereignty is not about introducing emergency food aid from foreign countries when there are farmers on the ground with product to sell. In short: dependence on foreign technology and external business interests creates more problems than solutions.

Two days after the International Day of Rural Women, we made our way down to Wall Street to observe New York’s own form of occupation and to hear Janaina speak to a crowd at Zuccotti Park. As we carried the MST flag through the square, supporters rushed up to speak to Janaina to discuss the movement and its link to the U.S.

Janaina took the stage. Addressing a crowd of community gardeners and supporters of the occupation, she offered lessons learned from leading the MST. While policy makers may lag behind, revolutionaries create change from within a movement–change sprouts from action. Occupation, she shouted, was a time to grow: to grow education, empowerment, and food community. In solidarity with the movement, in solidarity with occupation, the crowd chanted: “Ocupar, Resistir e Produzir!”