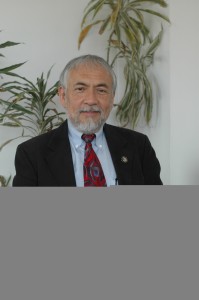 Over 1,000 people have gathered in Oakland, California to attend the Community Food Security Coalition Conference today, an annual gathering that, as Nieto says, is “a real opportunity to organize and a call to action to take back our food system.” We are just steps from the tent city housing a lively group of Occupy-ers and the boarded Bank of America and Wells Fargo storefront windows along Broadway Street. In light of these converging movements and the urgency of communicating the needs of the 99 percent, it’s fitting to highlight and champion the work of Y. Armando Nieto, Executive Director of the California Food and Justice Coalition. A child of the 60s, he is a staunch supporter of rising up and speaking your mind. Nieto is also a veteran of the environmental movement and a seasoned executive and development professional who is applying his business acumen towards good food for all. Let him inspire you to rise up and take a stand for what matters most to you and your community. The time is now.

The California Food and Justice Coalition is focusing on the 2012 Farm Bill reauthorization process as an organizing mechanism, not to organize for organizing sake, but to keep people more engaged in the system. We are a coalition of California organizations, but in order to affect the Farm Bill legislation, we partner with other organizations around the country. Our goal is to build a strong coalition that will work together for this Farm Bill and beyond.

Within the state, we have a real emphasis on holding listening sessions to set up a dialogue process that’s on-going; to learn what priorities people have for food and farm policy; and demystify the legislative process so people see what’s going on with food policy.

We also work with a couple of counties on a pilot project called Mothers Taking Action in San Joaquin and Ventura counties to provide a safe environment for mothers to share how they care for their families in good and bad times and how they can empower each other and effect change in their communities. It gives us a way to stay directly involved with families at a grassroots levels.

I’ve been building up to this my whole life. I was CEO of Redefining Progress and Managing Director with the Center on Race, Poverty & the Environment, and Executive Director at Eagle Eye Institute in Somerville, Massachusetts, Earth Share of California and the Environmental Defense Center. I’ve also done a lot of social justice work. All along, people become engaged then their attention wanders—but start messing with someone’s food plate they start paying attention again. I can bring the experience and expertise of the networks I’ve known, to use food as an organizing mechanism for fixing what’s wrong with our society.

We take back the food system. The necessity of this will engage people in conversations about values. I believe the purpose of food is to nourish people, it’s not a commodity to create wealth. That puts the cart before the horse. We can get back to core values of what we as people around the word believe in and re-create the kind of government and society that will work for us.

I work a lot and do a lot of volunteer work, so I read a lot of absolute fiction. I became a good friend of Dean Koontz at the Santa Barbara Writers Conference. His books can be post-apocalyptic, about society that isn’t sustainable, and individuals responding by creating their new environment. He raises practical information in fantastical situations.

All the young people. Where are the people my age? I just turned 60 and it was great to get well wishes. Staff here tends to be 35 and younger and the work I’m doing tends to be with that age group. I’m energized and empowered to be associating with people who care and work for similar values.

I totally believe I’m on the planet for a reason. I’m a child of the 60s, a lot of civil unrest and rage against the machine. I’m blessed to be a survivor, to have a seat at all the tables I’ve wanted to be at and have solution-oriented conversations. I am all about service. I’m a recovering alcoholic and believe we have the opportunity to create a better world. I’m old enough to have seen things going in cycles, the pendulum swinging back and forth; I choose to believe that we can spiral to a higher consciousness and apply lessons that seemingly generations have learned over and over again. We can evolve from that.

They used to be when I was 30, live fast, die hard and leave a good looking corpse. My goals now are to be of service until I stop breathing. I have a 25-year old daughter who is half Chicano; I hope the world I’m creating provides her the opportunities for professional and personal growth that have not been available to me. If I stay teachable, I will probably live forever and continue being an example of what you can do right and wrong and continue to survive. That’s my goal.

I think that as individuals we are changing all the time, but I hope THE CHANGE happens in my lifetime. I’ve been around long enough to see how a culture evolves around fear, so change looks like freedom, people being able to breathe free and really discount and not pay attention to the histrionics and propaganda. Just see it for what it is and ignore it. It’s the most powerful thing we can do.

It’s showing up. It means questioning everything that’s the common lexicon. For example, democracy isn’t voting every four years. It’s about being responsible and accountable for yourself. People can begin to not look to the President, like after 911 ‘go shopping’; what if it was to reach out to your neighbor, come of out of fear, have a potluck, take responsibility for being a part of a community? I think one of the sins the grown ups did in this country, morally, two big ones we allowed to happen, after 911, when the world said we are America, we allowed that to be politicized for a little man from Texas, and during the 2008 political campaign, we allowed Hilary Clinton to be demonized for saying it takes a village to raise to child. It was morally corrupt to demonize her. I was not a huge Hillary supporter, but we were wrong to do that.

We don’t have enough discourse, that’s where it starts.

The Mothers Taking Action program we’re piloting for two years and building a replicable model to offer to all 52 counties in California. It’s a way to honor how families have survived, what mothers know and what has kept families fed in good times and bad. In society we have set ways of doing things and this puts our money on the mothers.

We’re working with Roots of Change to build a council of councils. To create a platform, a statement of values that we all can share.

We co-hosted the 15th annual Community Food Security Conference. It’s a real opportunity to organize and a call to action to take back our food system. So some of the things we’re doing are challenging people to engage in conversations. It’s important to organize the organizers, but we want to go deep and engage citizens and residents and find out how they can to be engaged.

We’re working more and more on the effects of climate change and food systems. And the struggles for nutrition we’ll have in changing economic and climate times.

What projects are you inspired by?

I’m inspired everyday by work that individuals do. I’m skeptical of magic bullets; so while I totally appreciate and participate in celebrating the efforts of groups and individuals, I don’t think it serves anyone to single out anything I don’t have first hand knowledge of. What I’ve learned in putting together this conference is the Black Panther Party put on breakfast for over 200,000 children without any government support. We can celebrate that without getting into any political things.

Yeah, so I’ll give it to you straight. What happened before I took this position, I worked extensively in the environmental and environmental justice movement and climate change, and AB32 as CEO of Redefining Progress,which was a think tank of economists. I learned that things will get a whole lot worse before they get better.

So let’s focus on what we can do, on food. What is the purpose of food, not the histrionics of population and starvation; no let’s go back to what that means for individual communities and how a community can be self-sustainable and how we take that conversation away from multi-national corporations and money interests.

All of this is coming to fruition right now in a time of economic, social, environmental and psychological change. It’s a wonderful opportunity to catalyze grown-ups and responsive people to take back agriculture from the people who have effectively destroyed any opportunity for a sustainable future.

Non-traditional partners will have to come together and figure out how we interact and make it work for all of us. Then see what partners we have at the next concentric ring.

What does the food movement need to do, be or have to be, to be more effective?

It needs to get over it’self. Like any movment, I’ve always felt the same; I’ve always felt like a martian on the planet. Whether the civil rights or Chicano movement, we all think we are very cool, a way of being that’s probably been with us since we crawled out of the scum. But we have to realize we are all in this together. What comes out of today’s activities will be something new. It won’t be the food movement but a movement of peole that falls out of being accountable and reponsible. The food movemnt is a part of that, but we really have to get over this singleness and specialness to realize we all have to work together to creat the kind of world we all want to be in.