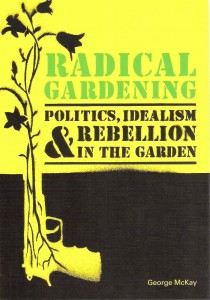 The notion that politics only takes place in the voting booth or halls of state basically evaporated in the 1960s. We now know that political acts occur in a range of settings: in our neighborhoods, bedrooms, kitchens, and, yes, even in our gardens.

The use of gardens as a means of social engagement and a forum in which to articulate oppositional ideas is the subject of George McKay’s Radical Gardening: Politics, Idealism, and Rebellion in the Garden. In the work, he chronicles the history of politicized gardens and documents some of the various ways that activists have utilized them to express their views. He hopes that his book will provide “a small corrective to the parochial or suburban or landed versions of garden understanding [by tracing] the strands of idealism, rebellion, political action and social criticism in the garden historically and presently.” His book leaves no doubt that radical gardens have, as he puts it, a “rich and challenging tradition, a significance, as well as a trajectory of energy and import that makes them matter for our future.”

McKay divides his book into three sections that mirror the most common uses of the word “plot.” He looks at gardens as physical “plots” that have been invested with political meaning—places such as London’s Hyde Park, which has been the site of mass protests since the 19th century, as well as gardens in progressive urban planning schemes. He then examines gardens as “plot” elements in narratives about war and peace, rightwing nativism and leftwing liberation: he discusses commemorative, military gardens; quasi-green trends among the Nazis; the employment of particular flowers—such as the white poppy and the Peace Rose—as pacifist symbols; and gardens as places of feminist resistance. Finally, he explores the use of gardens in conspiratorial “plots” designed to challenge authorities, such as the guerrilla gardening campaigns found in cities across the globe and, more specifically, community gardeners’ mobilization against Rudolf Giuliani’s assault on public space in New York City in the 1990s.

McKay begins his survey of each of these dimensions of politicized gardening in the late 19th century, when radical doctrines really took shape and people started thinking about how gardens might (or might not) fit into the picture. He lingers a great deal in the 1960s and then follows events up to the immediate present. Geographically speaking, he focuses primarily on the UK, but makes frequent forays into the United States and continental Europe. His sources are scholarly literature, site visits, and popular media.

The result of his labors is a short, well-researched, fabulously illustrated, trans-national history of radical gardening. The first and only book on this topic, it will surely be the definitive text on it for years to come. Although he addresses rightwing exploits in the garden, his emphasis is overwhelmingly upon progressive, emancipatory gardens—what he playfully designates as the horticountercultural tradition. He manages to extract a vibrant, oppositional history from an activity often construed as the embodiment of suburban domesticity. This transformed my sense of what gardens can be and, in fact, are. His affirmation that even mundane activities can be a vehicle for utopian aspirations led me to regard the book’s publication as a noteworthy event in its own right.

Having said that, a few nuances were missing. While McKay looks at gardens used by radicals for radical purposes, he never actually defines radical gardens or introduces any criteria that would allow us to determine whether one is radical (or reformist or conservative). It is the gardeners’ definition of their own efforts that matters to him, and this is not terribly satisfying. Indeed, I wish he had focused less on gardeners’ declarations of intent and more on how their initiatives challenge or reinforce prevailing land use practices. This might have made his book feel more academic, but what people say about their deeds should be a beginning not an end of analysis.

I also thought he could have placed his subject in a more precise historical context. While it is fair to trace the story back to the late 19th century, the idea of gardens as a form of social intervention is really a product of the 1960s; given this, more information about that period, and the cultural developments that helped produce such a compelling link between gardens and politics, would have enriched the book. Furthermore, I would have welcomed a discussion of the implications of climate change on the future of radical gardens. Whereas earlier generations of activists could champion gardens in an effort to foster ecological sensibilities generally, the need to prioritize the reduction of carbon emissions changes the scenario for gardens in important ways. Some—like Edward Glasser, author of The Triumph of the City—argue against community gardens and assert that urban space should be given over to housing, which will reduce sprawl and, as a result, our carbon footprint. Though one can imagine persuasive counter-arguments, my point is that the circumstances of radical gardening have changed.

Nonetheless, these minor oversights do not diminish the value of McKay’s unusual, engrossing work. Certainly we cannot expect him to cover everything and, even if his book has some shortcomings, he still deserves high praise for authoring a readable, insightful account of politicized gardening. By showing that gardens can be an arena of contest and engagement in which egalitarian (and not-so-egalitarian) values flourish, he demonstrates that they can be much more than a private, suburban pastime and actually a vital element of our participation in the political world.

Chuck Morse is a writer, translator, and editor based in Oakland, California. He has a long history in radical movements and is currently researching grassroots alternatives to capitalism. Read more >