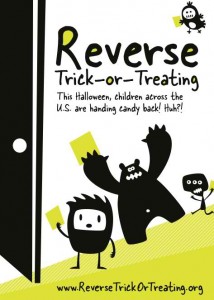 Halloween is a time for ghosts, goblins and the latest cartoon or sci-fi characters. And oh the candy! This year is the fifth annual Reverse Trick-or-Treating, an initiative of Global Exchange’s Sweet Smarts network, with leadership from Equal Exchange. Trick-or-treaters around the country will be handing out fair trade chocolate to over 100,000 adults who normally would be handing goodies to them.

In 2003, the U.S. State Department issued a report stating that “approximately 109,000 child laborers working in hazardous conditions on cocoa farms in the Ivory Coast,” a country where “the law does not prohibit trafficking in people.”

There’s documented forced child labor in the Ivory Coast, a large source of the chocolate sold in the U.S., said Kelsie Evans, worker/co-owner of Equal Exchange, a chocolate fair trade organization that supports farming cooperatives around the world who provide sustainable farming methods.

The average cocoa farmer may earn up to $100 a year—nowhere near what it takes to take care of a family. To maximize cocoa yields, wildlife habitat gets destroyed and increased pesticide use is encouraged. All this for the gooey chocolate treats you hand out every year.

This year marks the 10th anniversary of the signing of the Harkin-Engel Protocol—an agreement by this country’s largest chocolate companies to put an end to forced child labor on cocoa farms in West Africa by 2005. While some of the chocolatiers have made strides to correct these abuses, Hershey’s has done little, activists say.

Global Exchange, Green America and the International Labor Rights Forum (ILRF) issued a joint report targeting Hershey named “Time to Raise the Bar, Hershey!” It details how hundreds of thousands of children are still being forced to work under abusive conditions for long hours on cocoa farms in West Africa, while others are victims of trafficking and forced labor. The documentary, “The Dark Side of Chocolate,” also profiles this sobering subject.

It’s a hard topic to talk about, says Evans. “Chocolate is seen as a source of joy in the world,” she said. But, she added, “Children grasp some of these concepts about fairness.”

Reverse Trick-or-Treating happens Halloween night, according to Kylie Nealis, the coordinator of the campaign.

“It’s kids taking action on a problem that affects other children,” she said.

“It’s a great teaching moment,” said Rodney North, The Answer Man and co-owner of Equal Exchange. “There’s a surprise factor of the child down the street is bringing the lesson to me—and you get to eat the solution.”

An environmental journalist and professional blogger who’s passionate about green, Debra Atlas profiles the newest, affordable, eco-innovations. Her newspaper column, Distinctly Green and her radio feature, Eco Trends outline ways to painlessly green our lifestyles and lighten our carbon footprint. She’s a regular contributor to a number of online websites and blogs, including SierraClubGreenHome.com and her own blog, Envirothink, where she focuses on covering eco-innovations, sustainability and breaking eco-related news. Debra can be reached at debraatlas@gmail.com. Read more >