The Bread Project: Cooking Up a Future for People in Need | Civil Eats

The Bread Project: Cooking Up a Future for People in Need 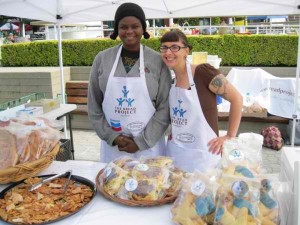 Pat Van Valkenburgh is the kind of person that The Bread Project hopes to help. A stay-at-home mom who home-schooled her two children until they attended Berkeley High School, Van Valkenburgh desperately needed a job when her construction worker husband became unemployed. Since she enjoyed cooking, she thought the nonprofit’s nine-week café training program, which focuses on basic kitchen, food service, and barista skills, was a good fit and would help her find a job in the restaurant industry.

Van Valkenburgh didn’t have to look far for work: she was snapped up by the organization to manage the café it runs out of the Berkeley Adult School, where the program for low-income job seekers, started by Susan Phillips and Lucie Buchbinder in 2000, has been housed since 2003.

The part-time gig has made all the difference during tough economic times; Van Valkenburgh’s family has held on to their home and health insurance. (Both her kids, who attended the Academic Choice School at BHS, currently study at local community colleges and intend to transfer to UC.)

The Bread Project Café, where students learn and practice their new culinary skills, is open to the public and frequented by the staff and students at the adult school. It serves baked goods, soups, salads, and sandwiches, along with coffee and tea at prices half those charged in most local cafés.

No matter that the vast multipurpose room that houses the cafe is largely devoid of charm, people come to the café for the food, the friendly service, and to support a worthwhile cause. On the menu yesterday: lemon scones and chocolate croissants, corn chowder with spinach, vegetarian pizza, and corn-crusted tilapia with rice and vegetables. In the late morning a steady stream of people were putting in their lunch order.

The Bread Project also boasts a bakery in Emeryville, opened last year thanks to funding from both Semifreddi’s and Chevron, where it runs a 12-week training program that emphasizes baking, batch cooking, food service and food manufacturing.

Potential participants go through a screening interview to assess their strengths—along with their challenges and barriers—to better serve their goal of finding food service employment once they finish their training.

Students earn a certificate of completion if they attend most of the instruction sessions and pass most of the required written and practical tests given during the course.

While there’s a lot of encouragement and support for students, there’s also an expectation that they meet standards of on-the-job food industry—like showing up for work. The program’s main goal: to foster economic self-sufficiency in program participants.

Their results speak for themselves: over the past three years an average of 77 percent of students graduated, 72 percent found jobs in the food field, and 80 percent retained employment. Last fiscal year 126 students completed the program. 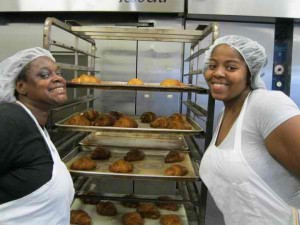 Many of those students have never had a job, have been welfare recipients for a long time, have minimal education or workplace history gaps. But as the economy continues to tank, there’s been a significant increase in the number of college graduates in the program’s mix, along with a larger group of recently unemployed and those who need job retraining, said acting executive director John Lee.

Graduates have gone on to work in restaurants like Radius in San Francisco and Lake Chalet and Spice Monkey in Oakland, said Daniel McCarthy, a veteran chef who co-teaches the culinary café program. Others have obtained employment in food industry positions for Jamba Juice, SF Soup Co, Mariposa Bakery, AG Ferrari, Berkeley Bowl West, and Revolution Foods, according to Lee. Some have joined the staff of catering companies or senior centers. In addition, the program, which has a policy of hiring its own graduates, currently has six on staff.

“It is personally rewarding to see the individual successes of our graduates, whether it is an improvement in self-confidence or obtaining their dream job,” said Lee.

The program offers students the opportunity to try their hand at everything from bread baking and cookie and cake making to main meals, side dishes, and other savory fare. Students also learn how to make specialty coffee drinks and work a cash register. The project has a catering arm, wholesale bakery business, and partnerships with farmers’ markets like the one at Rincon Center in San Francisco, and social-service agencies such as Project Open Hand.

“It was an excellent training program,” said Dilsa Lugo, a graduate who runs Los Cilantros Mexican food catering company, in a Berkeleyside story last year. “To this day the staff there have been helpful to me in my business.”

One former student recently opened her own café in Berkeley. Mary Dirks runs the new Hippie Gypsy Cafe on Shattuck Avenue (in the former Village Grounds space). Dirks hired two fellow students from The Bread Project to work with her, Angela Guzman, 25, from Oakland, and Erika Burrios, 19, from Richmond.

She’s not your typical Bread Project success story: Dirks’ parents ran a coffee house-gas station and she had years of food service experience as a Subway manager in Florida, where she lived up until two years ago, when she sold her home and moved with her son to South Berkeley.

The 46-year-old single parent already had a café business plan in the works, but landed in town with few connections on the food industry front. When a flyer for the Berkeley Adult School landed in her mailbox, she realized The Bread Project was just the kind of course she needed to help turn her café idea into reality.

She jokingly described Chef Daniel as the Gordon Ramsey of The Bread Project, because of his high expectations and commitment to restaurant-quality standards. But she also said he’s been an invaluable resource and informal consultant for her own budding business. And his philosophy of passing on your culinary expertise and giving back to the food community resonated with her.

Guzman, a single parent and former nurse’s assistant with no formal culinary training, was an immediate pick for Dirks, because of her common sense, calmness under pressure, and strong work ethic, the café owner said.

Along with food service training, the program helps students with job placement skills such as resumes and cover letters, said Guzman, and encourages students to overcome self-esteem issues (she described herself as quite shy before she did the training) in order to find work.

“I learned knife skills, such as how to julienne vegetables, health and safety rules around the use of cutting boards, and other kitchen skills,” said Guzman. “But there was also room to be creative. We were shown the basic ingredients that go into making scones and were given the opportunity to come up with our own flavors like lemon blueberry or orange chocolate,” she explained.

“It’s really hands-on, which is how I learn best. You’re encouraged to just do it, get messy, and figure it out for yourself—which is great training for a job.”