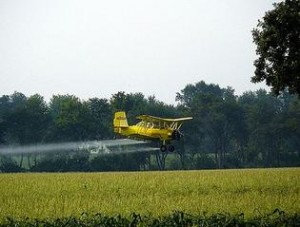 It starts with a distant, unmistakable whine, like a fly in another room you’ve been too lazy to swat. As the sound grows, I make sure the dog is inside, then grab the camera and head to the pasture.

Planes spraying fungicides have interrupted several quiet weekends on our small farm this summer. They’re hard to ignore–the buzz of their loud propellers is deafening, especially when they fly above our house to turn around. Over the corn fields they soar, sometimes only a few feet about the tips of the tassels, with white mist trailing nefariously behind. Depending on the direction of the breeze, I can often smell the chemicals from inside the house.

I hate every minute of it.

Once it’s clear that the plane is in fact spraying the field beside our small farm, the most immediate concern is the integrity of the electric netting that keeps in our grass-fed sheep. There’s a substantial voltage charging through the fence, but the sheep have been known to charge through it or jump over it when they’re startled, creating a messy, scattered scene. The giant noisy yellow bird in the sky can definitely cause a breakout, and I don’t blame them. Luckily–this time–the sheep stayed where they were supposed to, though the running they did trampled the grass they were supposed to eat for breakfast.

As long as the sheep are inside their paddock, the next concern on my list is chemical drift. Our farm is not certified organic, so we’re not risking three years of lost revenue if the pilot misses or the wind shifts. Even so, the welfare of the animals is important, and I’m not excited at the prospect of potential respiratory problems if they get a lungful of pesticide.

Unfortunately, neither the company spraying the chemicals nor or our conventionally farming neighbors are required to tell us when they plan to fly over. Don’t get me wrong, my neighbors are really good people, though we have different attitudes about farm chemicals. The corn harvest is their livelihood, and the fungicide producers say that protecting it from disease could mean an additional 15 bushels per acre of grain (although this claim is still contested). I think it probably doesn’t occur to them to let us know, because they’re surrounded by these materials all the time.

All the same, I’d like to maintain my choice to keep chemicals off my land and out of my body.

If they had told us about the timing of this latest plan to spray, we would have moved the girls and their babies closer to the barn, where they’re less likely to be affected. Even when I know what they’re spraying (in this case, a fungicide called Headline they assure me is harmless), I have to wonder what impact it could have when combined with all the other chemicals floating around in our environment.

My concern also extends to my own health, especially since we’ve watched them over-spray onto our grove. After they spray, I always wonder: how long will it be before I can safely romp in the woods with my dog? Did anything drift onto the garden I’ve been working so hard to keep chemical-free? Has anyone been spraying while we’re not home?

After a conversation with staff at the Pesticide Action Network of North America (PANNA), however, I’m not sure there’s much I can do. Liability is complicated, especially since we’re not organic and cannot point directly to loss associated with chemical exposure. In order to make a solid case, we’d also have to do more than take pictures of planes–we’d have to make use of a “drift catcher,” which samples air and measures for the presence of pesticides. Then we’d have to show that the presence of pesticides has directly hurt our  farm income–and it hasn’t.

I did look up Headline in PANNA’s chemical database. It’s not a human carcinogen or a cholinestrase inhibitor (a dangerous neurotoxin), but that was about all the site could tell me. Chemical companies aren’t required to test for synergistic effects, where the presence of more than one chemical amplifies the toxicity of all of them. And of course, I have no idea whether it could affect my sheep. At least they’re not pregnant yet.

The best we can do is write a letter to our neighbors and to the aerial sprayers they hire, asking them nicely to be very careful when spraying on us. I mean, I know they can be incredibly accurate if they want to be.

Before long, the planes move on to another field. The odor dissipates, the sound grows faint, and the sheep calm back down and start munching alfalfa again. Back inside, I wonder whether the pilots have seen us in the pasture snapping pictures and making our presence known. Do they think we’re watching in awe at their daring, low-flying maneuvers, or that we’re crazy for not trusting the chemical company’s claims that it’s safe? I also worry for the pilots and other chemical workers; I’m only exposed to this stuff for a few days a year, and from a distance. For their sakes, I hope that I am just paranoid.

Steph Larsen lives in Lyons, Nebraska, where she and her partner are "part-time farmers" growing food for themselves and their community. Steph holds a Master's degree in Geography from her home state of Wisconsin and serves on the board of the Women, Food and Agriculture Network. Read more >