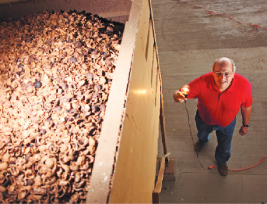 Energy security is an increasingly important—and sometimes overlooked—aspect of food security. Producing food requires considerable fuel, electricity, heat or cooling, and inputs that have embedded energy costs. Every step from seed to stomach requires energy, and has a carbon cost. And in thinking about a secure, decentralized food system we have to think about how to meet those energy needs in secure, affordable and local ways.

This idea is nothing new to farmers and ranchers, for whom the bottom line considerations of energy use are an essential part of their business calculations. More and more producers are looking for ways to become more energy efficient, conserve water (in part because it takes energy to pump it), and in some cases “grow their own” green energy. On-farm renewable energy production can cut energy costs and in some cases provide a new source of income if there’s extra to be sold onto the grid. California producers are ahead of the game in this area—according to a USDA survey, the state leads the country in the production of on-farm wind, solar and solar thermal.

Last weekend, Governor Brown signed a bill that will make it easier and cheaper for farmers to get their “waste to energy” projects connected to the utility grid and get credited for that clean energy. SB 489, the Renewable Energy Equity Act, was authored by Senator Lois Wolk (D-Davis) and sponsored by the California Climate and Agriculture Network (CalCAN). It opens up California’s Net Energy Metering (NEM) Program to all eligible forms of renewable energy, including biomass and biogas.

Potential feedstocks for biomass production include agricultural waste from food processing, prunings from orchards and vineyards, and grape skins and seeds left over from wine processing. All new biomass projects have to meet existing air pollution standards. And importantly, the NEM program applies only to relatively small projects—one megawatt or less—so most of the renewable energy is consumed close to where it is generated, becoming part of the solution for a distributed, locally appropriate, scaled-to-fit energy generation system.

Russ Lester of Dixon Ridge Farms is an innovator of on-farm biomass production. Dixon Ridge grows organic walnuts and also processes all of California’s organic walnuts. Russ used to sell his walnut shell waste to a large biomass facility and have it trucked away to be burned and turned into electricity. Several years ago, he installed a state-of-the-art gasification system to produce combined heat and power. The system uses high pressure and heat to turn his walnut shells into heat to dry the walnuts and electricity to power his massive freezers (used instead of chemical fumigants for killing insects, and to keep the walnuts fresh). He uses the biochar that’s left over as fertilizer in his orchards and to increase soil carbon sequestration, an added climate benefit.

Because the biomass facility at Dixon Ridge hasn’t been eligible for the NEM program, and because their local utility refused to connect them to the grid at a reasonable cost, they have been able to generate energy only when they consume it immediately. Now that SB 489 is law, Russ will be able to maximize his potential for being a part of California’s clean energy future, increase his contribution to climate change mitigation, and get paid in electricity cost savings (spinning his meter backwards when he generates electricity), getting paid real money if he makes more than he uses.

At CalCAN, we are thrilled that SB 489 has been signed by the Governor, an indication of his commitment to California’s clean technology future. Now we will get to work to make sure that Russ’ story is replicated on scale.

Renata Brillinger is the Executive Director of the California Climate and Agriculture Network, a coalition of sustainable agriculture organizations focused on climate policy. CalCAN advocates for policies that provide resources for California farmers to adapt to climate change and reduce greenhouse gas emissions. Read more >