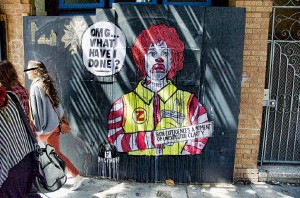 While the expression “vote with your fork” has become a slogan for the modern food movement, many advocates struggle with how to move from conscientious consumerism to engaged citizenship. Harnessing the groundswell of public interest in food to create lasting policy change was the subject of a recent San Francisco Kitchen Table Talks, a monthly conversation about food issues.

Facing a fierce opposition from chains like McDonald’s, Mar credits the campaign’s success to uniting diverse community interests under the banner of public health. “Legislation is not the most important thing; it’s the process of empowering or disempowering people,” he said.

The campaign found allies in local community groups with interests in food access and children’s health, including the SEFA Food Guardians in Bayview Hunters Point, the Women’s Collective of La Raza Centro Legal, and Literacy for Environmental Justice. They also partnered with Corporate Accountability International, authors of the Retire Ronald and Value the Meal campaigns.

McDonald’s threw lobbying and advertising money into a strong counter-campaign, claiming that the regulations would hurt small businesses and take away parents’ right to choose. In response, the Healthy Meal campaign framed the issue as a public health concern, rallying pediatricians and parents groups behind the cause.

Eight supervisors’ votes were needed to override Mayor Gavin Newsom’s anticipated veto. The campaign put pressure on Supervisors Sophie Maxwell and Bevan Dufty by mobilizing parents and communities in their districts. The ordinance passed eight to three. By asserting local rights over the interests of multimillion-dollar food corporations, the groundbreaking legislation sent a powerful message. “It’s a small step forward but it’s a proud moment when you force corporations to make some changes,” said Mar. “We have to be revolutionaries in thinking about the food system, not only about what we do as individuals. It has to challenge the corporations that rip off and oppress our communities.”

From the Grassroots Up

From the citizen frontlines, Eli Zigas discussed how the San Francisco Urban Agriculture Alliance (SFUAA) went about changing outdated zoning code, thereby empowering urban farmers to cultivate and sell their produce in the city. The initiative originated with two young urban farmers, Brooke Budner and Caitlyn Galloway of Little City Gardens, a 3/4-acre farm in a residential neighborhood in the outer Mission district. When they decided they wanted to set up a farmstand and start marketing to restaurants, they ran up against city rules requiring an expensive conditional-use permit and a hearing before the S.F. Planning Commission.

They launched a campaign to revise the old law, backed by the newly formed SFUAA, who began sending letters to the mayor’s office. After an influential sympathizer wrote a letter of support, the mayor began to take notice.  Motivating many individual citizens to take action (grassroots), while simultaneously forming alliances with well-connected or well-respected champions (“grasstops”), were key ingredients in the campaign’s success. “Much of what we did was not about electronic activism,” said Zigas. “It was about old-school activism that used electronic tools in turning out people and sending in letters and making phone calls and turning out people again.”

After nearly seven months of meetings with city departments and supervisors, Supervisor David Chiu and Mayor Newsom introduced the new legislation, kicking off a larger public debate. As a volunteer-run effort, numbers were important, with some individuals being more or less involved. Participants showed up at hearings, circulated petitions, solicited businesses for support, got other groups to sign on, wrote letters, built a Web site, and presented to classes.

Timing and luck also played their part. Urban ag was experiencing a renaissance and public support was flourishing. In 2009, Mayor Newsom passed the Executive Directive for Healthy and Sustainable Food, which called for an increase in urban food production through an audit of unused public land, support from Rec & Park, and new marketing opportunities for local farmers. The SFUAA’s proposal was right in San Francisco’s sweet spot.

On April 12, 2010, the bill passed unanimously, raising the level of power and influence of farmers and gardeners in the city. “When it came down to it, the most important thing was packing 70 people into a City Hall hearing room, so much so that the police had to keep people out,” said Zigas. “That had an impact on everyone who saw that hearing.”

Tools of the Trade

Prior to social media, some of history’s most successful movements, such as the Montgomery Bus Boycott, organized through word of mouth: church meetings, phone calls, knocking on doors. From the food movement playbook, federal food labeling requirements started with a group of California mothers who organized through PTA meetings, leading to the Nutrition Labeling and Education Act of 1990.

With the advent of social media tools, the rules for engagement have changed, but they haven’t replaced direct action; they’ve just maximized it. “Social media increases your ability to organize by 100 times,” Burdo says. An early example of social media organizing, Kitchen Gardeners International’s 2008 Eat the View campaign gathered 110,000 signatures through online channels, successfully urging the White House to plant a garden. The project reached a critical mass after months of campaigning when their petition jumped from 10,000 signatures to 20,000 in six days after it posted clever videos that went viral.

Tell a story. The SFUAA’s campaign gained attention by presenting a simple, easily relatable story about two young gardeners who just wanted to sell their veggies. Create strong, clear messaging, and use voices, photos, and videos to bring your issue to life.

Get the word out. Know where your message is going. According to Burdo, 71 percent of Americans are on Facebook, making it the place to go to build and converse with supporters. Only 5 percent of the general public, but 90 percent of media professionals, use Twitter, making it less useful for grassroots organizing and more useful for framing the debate for reporters.

Seek grassroots and grasstops allies. Form coalitions to build numbers. Partner with community groups and organizations that share interests in public health, local development, and the environment. Don’t underestimate the power of sympathizers in high places, who can push your cause behind closed doors.

Use social media, but don’t overuse it. Clogging feeds and inboxes with e-blasts is no way to keep supporters. Be strategic in your communications. “Post no more than three to four times a week on Facebook,” said Burdo. “Organizing is about building a list and turning that list out.”

Keep momentum going. In drawn-out political campaigns—and most of them are—the worst thing you can do is let momentum fade, according to Burdo. To keep supporters engaged, provide concrete actions to participate in, such as meetings or rallies. Zigas agrees: “When you ask people to do something make it meaningful (don’t waste volunteers’ time), make it fun, and win.” Celebrate victories of all sizes, even if it’s just scoring a hearing date.

Make it personal. What about those chain-letter petitions that glut our inboxes? The panelists agreed that a personalized paper letter goes much further in getting a legislator’s attention than a boilerplate e-mail. Put time into your communications to elected officials, write from the heart, and create a meaningful connection.For the SFUAA, having online petitions, a Facebook page, and a MailChimp list helped keep their supporters informed, but they were just tools of the trade, not ends in themselves. “It’s not how many tweets you have, but how well your tweets and phone calls get people out to do tangible things,” said Zigas.