Why the Food Movement Should Occupy Wall Street | Civil Eats

Why the Food Movement Should Occupy Wall Street 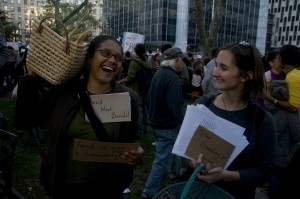 I went to the Occupy Wall Street march last week, as part of the NYC food justice delegation. We carried baskets of farmers’ market vegetables and signs reading “Stop Gambling on Hunger” and “Food Not Bonds.” Food justice advocates came out from around the city—urban farmers, gardeners, youth, professors, union members, and community organizers. The vegetables attracted a lot of attention. Food so often attracts a lot of attention—the New York Times is just one of the outlets to focus in recent days on the makeshift kitchen at Zuccotti Park. What was more surprising were all of the puzzled looks we got from the bloggers, photographers, and other marchers who wanted to talk to us. “What’s the connection here with food?” we were asked many times.

The connection of the protests with food, of course, runs from the local to the global, the specific to the ephemeral. Food justice advocates are connecting with Occupy sites all around the country to donate fresh, healthy, local food or to help find kitchen space. On a broader philosophical level, as Mark Bittman writes in the Times, “Whether we’re talking about food, politics, healthcare, housing, the environment, or banking, the big question remains the same: How do we bring about fundamental change?”  But there are also clear and specific reasons that all of us working for a just and fair food system, as the food movement should make the connection between our work and Occupy Wall Street explicit and strong.

In the U.S. today, the richest one percent hold 40 percent of the wealth, while almost one in five Americans is on food stamps.  Rampant Wall Street speculation on commodities is driving up food costs, small farmers are being driven off their land, and agribusiness holds monopoly control of our seeds and stores. In this climate, the struggle against massive wealth disparities, unregulated financial institutions, and excessive corporate power is our struggle as well. Two points in the Declaration of the Occupation of New York City address the food system. While barely scratching the surface of the potential connections, the protesters have provided an important opening for the food movement. Will we seize it?

At the most obvious level, as the Institute for Agriculture and Trade Policy recently wrote, “Wall Street deregulation has not only made the stock market extremely volatile, it has increased prices and price volatility in agricultural markets.” That is, the relationship between government and Wall Street firms has turned food into commodity like any other, subject to the whims of the market. For decades, only people directly involved in agriculture (e.g., farmers) could freely participate in trade of futures of agricultural commodities (e.g., corn, soy, wheat). Outside speculators were allowed into these markets but with strictly enforced limits to how much they could buy. Futures trading served a practical purpose, giving farmers a guaranteed price for future harvests, and prices stayed relatively stable and reasonable for both buyers and sellers.

But in 2000, a wave of industry-backed deregulation raised and then removed these limits on speculation, which opened commodity markets to a flood of new players—these later included funds controlled by some of the biggest Wall Street firms looking for new investment opportunities after the housing bubble burst. Flooded with new investments unconnected to any direct stake in crop prices, in 2008, the commodity markets exploded, driving up grain prices worldwide. The grain price spikes were catastrophic for millions of people worldwide. Farmers, who sometimes benefit from high grain prices, mostly were no better off, because similarly skyrocketing energy prices also drove up prices of agricultural inputs.

In 2008 and 2009, the UN estimated that an additional 130 million people were driven into hunger by the food price bubble. Spontaneous food riots broke out in dozens of countries where chronic hunger is a reality. Today’s Wall Street protests are not unconnected to those; the effects of food and energy speculation continue in 2011. A study in June by University of Massachusetts Amherst professor Robert Pollin estimates that U.S. gasoline prices are $0.83 higher per gallon due to Wall Street speculation. The CEO of ExxonMobil said he estimates prices are $1.20 to $1.40 higher per gallon. And food commodity prices are as high, or higher, than they were in 2008—while 46 million Americans are now living below the poverty line, struggling with basic expenses like food.

Wall Street firms aren’t just gambling on food prices, they have begun speculating on land as well. Alerted to the potential market in agriculture, investors are buying up huge parcels of farmland all over the world, displacing the occupants, and converting subsistence production to cash crops—or, worse, simply leaving the land fallow and waiting for its value to increase. According to international NGO GRAIN, which first reported on this trend in 2008, more than 50 million hectares of land has been transferred from farmers to corporations since 2009. “Land grabs” have affected tens of thousands of people around the world who have been driven off their land–often violently–with little or no compensation, given no say in the process, and left with no recourse. For most of them, land is their livelihood; without it, the future is bleak.

Land grabs are perpetrated by governments, private sector corporations, pension funds, and university endowments–as well as by banks and international finance groups. Some of these deals have a stated agenda of food security in the buyer country–at the expense of food security of those moved off the land–but many others are purely business deals, seeking to profit off of land on which millions of people are merely trying to feed themselves.

Too Big to Feed Us

On the grocery store side, Walmart didn’t even sell groceries twenty years ago, but it now controls nearly 30 percent of the US retail grocery market–and over 50 percent in many regional markets. A marketplace dominated by just a few players is subject to abuse of all kinds. Grain farmers, for example, are suffering: With often only one seller of inputs and one buyer for their crops (which is frequently the same company), they are forced to accept both prices, even if it means they don’t break even. Ultimately, many U.S. family farmers, like those in developing countries, are being driven off their land, because they can’t afford to stay in business.

All along the food chain, people are squeezed by powerful corporations: Walmart demands low prices from its suppliers, so the suppliers cut wages for workers in the factories and fields; most food stores rely on a single national buyer, so it is almost impossible for small producers to get products onto the shelves; supermarket chains buy out the competition and then close the only store in a low-income neighborhood.

The level of consolidation all along the food chain has reached such an extreme degree that last year the Department of Justice and the USDA conducted an investigation into antitrust issues in agriculture and food. During a year of workshops, the Departments heard expert testimony and thousands of personal stories about farm foreclosures, bankruptcy, workers’ rights abuses, unfair contracts, poor access to healthy food, and corporate propaganda; much of it demonstrating that antitrust laws are not protecting citizens from powerful corporations. The investigation concluded in December; the Departments issued a joint letter in July stating that they are continuing to study the issue. After a year of investigation, testimony, and almost a quarter of a million petition signatures requesting immediate action, the promise of nothing more than further study makes it seem as though the voices of big business have been louder than those of the people.

Many food justice advocates are well aware that to truly create a healthy and just food system, we must also address issues larger than food.  At a town hall meeting in Iowa the night before the first DOJ/USDA hearing, a family farmer from near Des Moines wanted to talk not about his farm, but about power. “Industry cannot turn one wheel unless people make those machines work,” he said. “We have the power here, and we need to understand what that power means.”

To change the food system, we need systemic change in financial institutions, regulation, corporate influence; we need a shift in power. For a movement that has long been waiting for its moment, uniting in common cause with Occupy Wall Street may be the way to finally build enough power to create the change we need.

Thanks to Dave Kane, Christina Schiavoni, and Maria Aguiar for invaluable assistance.