Catching Up with Eco-Chef Aaron French 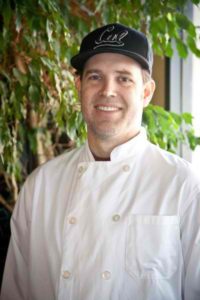 Aaron French, a self-described eco-chef, has headed up the kitchen at The Sunny Side Café on Solano Avenue in Albany, California since it opened in 2004.

For the past two years he’s served up breakfast standards (think pancakes and eggs) and simple lunch fare (burgers, sandwiches, salads) at a satellite café of the same name in Berkeley.

French bounces between the two popular spots several times a day and jokes that the breakfast-brunch shift is the Rodney Dangerfield of cooking (it don’t get no respect).

French isn’t your typical chef. Before he cooked for a living he worked as a scientist. His interest in ecology led him to spend two years living among pygmies in Cameroon, where he studied seed dispersal by monkeys and birds.

An avid nature photographer, he’s also written about the relationship between ecology and food for the Bay Area News Group, where he penned the EcoChef column, as well as for Civil Eats and Fungi Magazine.

French, 40, is the author of the forthcoming The Bay Area Homegrown Cookbook, which reveals the partnerships between 29 local chefs and farmers, and features fellow Berkeley chefs Amy Murray of Venus and Revival, and Marsha McBride and Rick DeBeoard of Café Rouge, as well as local fungi foragers Mil Apostol and Lucy Collier of Gentle Giraffe Farm and Forage.

He is studying sustainability at the University of California’s Haas School of Business, lives locally, and is co-raising his preschool age daughter, who was adopted from Ethiopia.

When did your interest in local food begin?

I spent part of my childhood on a small farm in Sacramento, where we grew all our own vegetables and fruit, and ate the eggs from the farm’s free-range chickens. Eating locally literally meant walking out the back door and harvesting dinner.

Where did the moniker eco-chef come from and what does it mean?

It was an insult by a co-worker at a hippie, student-run, super-crunchy, college collective called Che Café on the U.C. San Diego campus, where I worked when I got my undergraduate degree. One night, as we were cleaning up, I found myself separating the recycling from the trash. This was before recycling was routine. And my co-worker just wanted to get out of there and he said: “What are you, some kind of eco-chef?”

Years later, when I started cooking full-time, I decided to embrace the label as a positive thing.

On the one hand, it means nothing really. But I’ve come to think of it as cooking in a way that supports local food systems and honors the people who raise our food sustainably and I incorporate those principals into everything I do, given the limitations I have.

I have to think about price point, so if I don’t buy organic potatoes, for instance, I don’t pretend I do. I’m doing breakfast for about 10 to 12 bucks a plate per customer, so I have to work with that.

But Sunny Side was the first green-certified restaurant in Albany. We use quality local ingredients and humanely raised meats and eggs. My five-item food-miles menu, which makes up a third of our weekend business, calculates food miles, and is like my gateway drug to sustainability. I do as many things I can given what I have to work with.

What differences do you find between the café in Berkeley and the one in Albany?

Well the owner of both cafés, who lives in Berkeley and prefers not to be named—he likes to keep a low-profile—originally wanted a corner café facing the sun and specifically chose Albany because it was easier to get something up and running there.

During the week it’s pretty mellow at the Albany location, I know many of the people who come there, I can tell you when they’ll come in and what they’ll order. On the weekends we get the families early and then the after-church or hangover crowd (or both) later on. We have our regulars at Berkeley too, but we also draw a lot of students, visitors at both the nearby David Brower Center and Shattuck Hotel, and people coming to Cal for sporting events or other campus activities.

Do you have culinary aspirations beyond being a breakfast chef?

The bar is pretty low for breakfast food so I actually find it’s really creative to work within the parameters of what you can do on a breakfast menu. I’m always looking for ways to increase the connections between ecology and food. That’s what keeps me going and inspires me. And the issues behind being “green” or “eco” or “sustainable” are all things I think about as I’m cooking on the line. I look forward to the day when none of us need to use these labels, which are buzzwords now, because they’re simply standard practice.