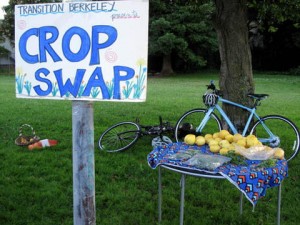 Heads up, green thumbs struggling to offload excess edibles: Aid is out there. A growing movement, designed to help people eat well, save money, and get to know their neighbors, is planting seeds in communities around the country. Crop swaps–meet ups where people exchange their surplus backyard bounty–are thriving from the San Francisco Bay Area to Boston in city and suburban enclaves and online, too.

Of course, there’s nothing particularly new about this phenomenon; who hasn’t been the beneficiary of the guy next door’s abundant squash plot or the woman across the street’s surplus spinach bed? Informal, low-key fruit and veggie trades have gone on since humans began cultivating crops. But these days, with the economy and the environment on many people’s minds, bartering food in a systematic manner is making a comeback. (For more on this, see Shareable’s story on food swaps.)

These weekly or monthly gatherings attract edible garden growers for different reasons. Some simply want to give away excess produce and, in exchange, get a little more variety in their diet. For others, including Transition Town movement members, crop swaps are part of a survival strategy, a way to build more resilient local communities to withstand not just financial hard times, but also energy shortages, climate change, and global warming. For some, it’s simply a positive way to socialize with fellow residents.

“We hope this will be a place for people to connect with others in the community who grow produce and exchange ideas about growing food and recipes, too,” said Carole Bennett-Simmons, co-organizer of Transition Berkeley‘s two crop swaps that started this summer, which attract about 30 to 40 locals. A retired public school teacher, she tends a plot at a local community garden, where she grows Swiss chard, bok choy, and beets.

Each local crop swap has its own way of working, but they all tend to run on a similar philosophy: No cash changes hands. Some spell out that produce must be homegrown, organic, or pesticide-free. Some are produce only, others include honey, eggs, and flowers. Still others, like the Boston Food Swap, accept prepared foods, such as pickles and preserves, along with foraged foods and backyard bounty.

Some crop swaps run just during the prime produce season, while others exchange goods all year. Since it’s high season for harvesting around the country, crop swaps are currently doing a booming cash-free business. During the winter and early spring, when crops are less abundant, some of these groups exchange seeds or starters.

At a recent Berkeley crop swap, people perused two folding tables and a couple of blankets loaded with freshly harvested produce, then filled their baskets and bags with plums and purple potatoes and gave away basil and beet greens. True to their roots–along with kitchen staples such as carrots, strawberries, and rosemary–Berkeley growers showed up with some less well-known produce including loquats, grape leaves, and angelica. It was all very civil and low-key.

The hour-long gathering seemed like a truly hyper-local affair with people walking or biking their fruits and vegetables over, visiting with friends and neighbors, and swapping recipes with fellow traders. “How do you cook beet greens?” asked one. Another, who took home a stalk of angelica, picked up a tip to add the herb, which has a flavor similar to cilantro, to the batch of ice cream she planned to make. 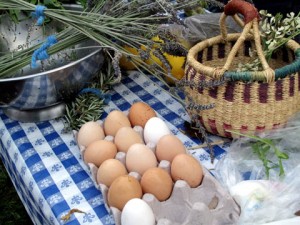 Three years ago, the group behind the Oak Park Crop Swap of Sacramento, California, took back a blighted park that was a haven for negative activities like panhandling, drug dealing, and prostitution, and turned it into a positive gathering place where people feel safe, explained Kara Thomson, who organizes crop swaps there during the summer months.

Participants at Oak Park Crop Swaps sign in, weigh their produce, listen to a featured speaker, and then start trading.This year, crop swappers have heard from a beekeeper, a worm composter, and an irrigation expert. “This was a challenging neighborhood, but now the crop swap and a farm stand that followed have turned it into a civilized social scene,” Thomson observed. About 20 local residents swing by each week, she said. Those with shady yards swap blueberries and leafy greens with residents whose sunny plots produce heirloom tomatoes and watermelons.

In the Internet Age, it’s not surprising that some crop swaps start out as virtual exchanges, the online food tool equivalent of Craigslist. “Tons of Leeks,” “Garlic Galore,” “A Bumper Crop of Beans” announce typical entries on such sites as the recently launched Massachusetts Food Trader and Portland Food Exchange, which allow produce suppliers and seekers to find each other online first before making their own arrangements to trade in person.

The Massachusetts Food Trader (which allows excess CSA or Community Supported Agriculture box trades) also promotes local real-time events hosted by Boston Food Swappers and the Somerville Trading Post. The site has 40 registered users since it started in July, though many more may check out what’s on offer.

Some come to website trading after limited success with classifieds and community bulletin boards. “I’ve been trading extra garden vegetables and veggie starts for a few years now and felt that we really needed an easier way to exchange food,” said Brian Connelly, on the Portland Food Exchange site. “This is a simple, yet very effective, means for people to barter food in our community.” And some people just prefer to swap with a local grower, Connelly maintained, than frequent a large supermarket stocked with produce from around the globe. 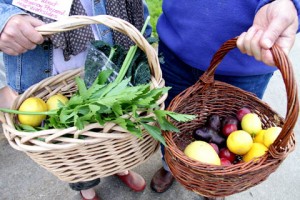 There are challenges–at the first Berkeley crop swap an overabundance of lemons comes to mind–to these local produce trades. Thomson said she’d like her events to attract a more diverse crowd, but hopes that word of mouth and flyer distribution will help with that. And, of course, few other parts of the country are blessed with as long a growing season as California. Consumers who opt to exchange with growers they find online are advised to meet in a public place, at least initially, for personal safety, though no issues have emerged on this front to date.

For those with concerns about food safety, it’s a “trader beware” situation, say swappers. This concern is raised more often in relation to preserved foods, where the liability lies between the two parties involved in the trade, according to Jake Benner, who co-runs MA Food Trader. Consumers should check preserved foods and produce for contamination and spoilage, he advised.

As interest in growing food increases around the country, crop swaps are likely to sprout in other locations. Some communities hope to take matters a step further, by running canning and preserving workshops in community kitchens so people can prepare for lean seasons and make full use of summer and fall’s abundance. Stay tuned.