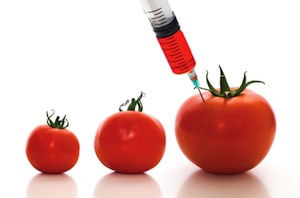 Food & Water Watch released a new report yesterday called Genetically Engineered Food: An Overview. Sounds rather textbook, yet this report contains answers to questions about this controversial method of food production that big agribusiness does not want you to know. Our researchers worked long hours to provide consumers with information to make informed decisions about GE foods, so you will want to check this out.

As agribusiness constantly reminds us, by 2050, the world’s population will reach approximately nine billion, and that’s a lot of people who will need to eat. While we should be having a comprehensive conversation about how to feed those nine billion people in a way that makes wise use of natural resources, agribusiness has been pushing biotechnology and genetically engineered foods as the only way to provide nourishment to a growing population. Since the mid-90’s agribusiness has found ways to engineer our plants and animals to possess more desirable traits (at least more desirable to their profit margins).

There is a tremendous push from the private sector to incorporate GE foods into our global food supply. More than 365 million acres of GE crops were cultivated in 29 countries in 2010, and the U.S. leads the world in production by being host to 165 million acres. Yet there are many questions that surround this controversial method of production. Do genetically engineered foods really provide long term food security? Are we tracking the health or environmental implications? Who stands to benefit from the policy changes that could potentially allow GE foods to infiltrate our entire global food system? How do GE foods compare to their natural counterparts?

The answers to most of these questions are unsettling. Check out the new report [PDF] to find out why.