Americans’ Views of Industrial Agriculture By the Numbers | Civil Eats

Americans’ Views of Industrial Agriculture By the Numbers 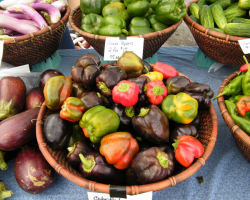 The popularity of Oscar-nominated Food, Inc. and writers Michael Pollan and Mark Bittman make it clear that consumer interest in food and farming issues is now deeply embedded in the cultural mainstream.

And that’s not just my personal impression. Two brand new polls show a surprising degree of agreement on consumers’ concerns about the quality of food and how it’s produced, considering that one was commissioned by an environmentally-oriented foundation and the other by an organization that’s out to advance the interests of large scale agribusiness. I’ll come back to those results in a minute.

Shoppers’ buying habits reflect their growing interest in food quality and where it comes from. Healthy food-oriented chains such as Whole Foods are thriving, farmers’ markets are more prevalent than ever, and organically grown food is the fastest growing segment of the agriculture sector. Before long, it’s inevitable that consumers’ growing interest in food issues will start to affect their behavior in the voting booth as well.

Industrial agriculture has taken notice, as evidenced by the “Food Dialogues,” a series of panel discussions convened last week (Sept. 22) in four cities as part of a $30 million public relations campaign mounted by big agricultural interests. Billed as an effort to connect consumers with farmers and ranchers, the event was created by the U.S. Farmers and Ranchers Alliance, whose membership list is a who’s who of major industrial agriculture organizations across the country.

While the panelists were mostly sympathetic to industry, they included World Wildlife Fund’s Jason Clay and Roots of Change President Michael Dimock, who said many smart things about the sustainability of modern agriculture. The event triggered comprehensive reactions by rancher Jeff Fowle and author Anna Lappé, and a story in yesterday’s (Sept 28) New York Times.

The Alliance set limits on the scope of the “Dialogues,” keeping potentially divisive issues like the farm bill or the corn ethanol debacle off the agenda and thereby skirting the touchy topic of how government policies affect what we eat. That’s too bad, because the farm bill is especially relevant right now as the Super Committee budget cutters in Congress tasked with reigning in federal spending take a hard look at what farm programs to cut. Many informed observers believe the committee will effectively re-write the farm bill this fall, a full year ahead of schedule. (For a little context, check out Why the Farm Bill Matters.)

President Obama, farm state senators and commodity groups have already weighed in, underscoring the likely impact of the Super Committee’s work on the future of US food and farm policy. We at Environmental Working Group have also issued several of our own analyses of how the Super Committee could, and should, reform farm policy. And today, 56 conservation-oriented groups, including EWG, have come together to lay out a set of principles that should guide the panel’s deliberations.

That’s why the polling information I can tell you about here is important, because it’s a unique window into what American consumers are really thinking, not just what big agribusiness wants you to believe.

In July, the David & Lucile Packard Foundation commissioned the Benenson Strategy Group and Voter Consumer Research to conduct a survey of American attitudes on issues related to agriculture, the environment, and the federal budget. Here–for the first time anywhere–are some highlights of the findings, based on 1,200 telephone interviews conducted nationally. (The poll had an overall margin of error ±2.83 percent.)

The Alliance’s two polls, conducted in August by Ketchum Global Research Network and Braun Research, sampled an even larger number of consumers (a total of 2,417) and, separately, 1,002 farmer and ranchers. The polling was part of the preparation for the “Food Dialogues.” Their website offers only a limited sampling of the results, but in some ways the USFRA’s poll findings were consistent with what the Packard survey found:

If you want to influence how the next five years of farm policy are written, arm yourself with the Packard Poll results and head on over to EWG’s food and farm bill action center, where you can tell Congress that you won’t stand for industrial agriculture’s hold on the food system anymore.