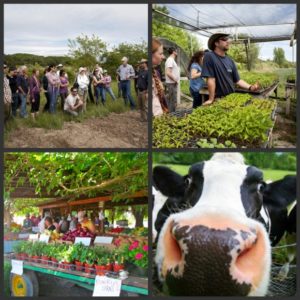 Three years ago, Marissa LaMagna started Bay Area Green Tours, a nonprofit, shoestring operation now headquartered in the David Brower Center  in Berkeley, California (and largely staffed by eager, eco-conscious, unpaid interns) because she wanted to showcase the best sustainable farms and food, buildings and businesses, energy practices, and employment opportunities in Berkeley and beyond.

The green tour business with a biodiesel bus takes people from near and far to see for themselves and hear the stories behind successful sustainable enterprises in the area, whether it’s Gather restaurant in Berkeley, Knoll Farms in Brentwood, or Nicassio Valley Cheese Company ranch in Marin. In addition to public programs, the group has led private tours for Whole Foods, Kaiser Permanente, and Berkeley High’s Green Academy. 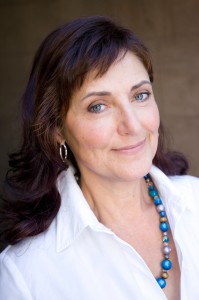 LaMagna, who owns a home close to downtown but lives in Oakland with her beau, brings years of experience as a community organizer to her latest business venture. (In previous lives she’s been a private natural foods chef, organic farmer, food coop organizer, school teacher, yoga instructor, film editor, and sound producer.)

In 2004, she founded a green-certified wellness center, Studio Rasa, in downtown Berkeley, which closed when she lost her lease.  At 62, she’s a poster gal for what a green lifestyle—a whole foods diet, yoga practice, and a love of nature—can do for a person’s vitality, health, and youthfulness.

LaMagna’s tour group has several upcoming events including a farm visit to Brentwood on October 8th, and a walking tour of San Francisco’s green waterfront businesses and a moveable feast in Berkeley featuring sustainable restaurants Five, Gather, and Revival on October 11th to coincide with the Slow Money 3rd National Gathering. 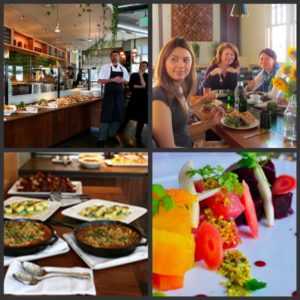 Also on the agenda: An Organic Cheese Tour on October 12th in West Marin in collaboration with The Commonwealth Club, and a Berkeley Food Sovereignty tour (think food justice and access) on November 5th during the Community Food Security Coalition‘s annual conference, a national event held in Oakland this year.

Find tour details and ticket information (tours start at $65) on their site.

On September 20th, LaMagna talked food tours over a bowl of organic grapes at the Brower Center.

Yes, ever since I was a little girl growing up in New York City with a single mom, in a flat so small we shared a bed. We lived with my great-grandmother and grandparents too. Everybody worked and nobody could cook. Grandpa, who was German, made the meals and they were terrible: always stewed chicken or tongue, frozen vegetables, and old potatoes. But we sat down at the table for dinner every night, which is something that I still do. And when my mom started dating a man who liked good food, he’d take me down to Hell’s Kitchen to see all the food vendors’ stands. That was my first experience seeing and tasting real, live food. I’ve loved farmers’ markets ever since.

When did you learn to cook?

As a young adult I got a job at a pizza parlor in a small town in Vermont and there was nothing to do during the week. I was so naive, I didn’t realized that the place got crowded on the weekend because the owner came up from Massachusetts in his Rolls Royce to sell cocaine out the back. So I taught myself to bake from The Tassajara Bread Book and it sold really well. Then an alternative school asked me to cook there. I didn’t know anything about cooking really, I was a baker. They gave me The Joy of Cooking and I started making food for 50 people.

What are some of the challenges of running a green business in Berkeley?

People who live here take a lot of what we have for granted. I just came back from the midwest. In some ways it’s purer there: There’s one farmers’ market and so everyone goes then. It’s a big deal. Here it’s like if you miss one day there’s always another market in a day or two. We’ve gotten a bit jaded.

Sometimes I think people forget how much green businesses need support from the community—Amanda’s Restaurant closed and she was doing all the right things on the sustainability front.

It’s also a struggle to keep up with all the changes in the sustainability movement because there’s so much going on all the time and things are moving quickly.

What do you most enjoy about the green tours?

I like to connect people, I’ve always been a conduit for people, a matchmaker, and an advocate for building healthy communities. It’s the teacher in me. I get a lot of satisfaction when people learn in an experiential way.

We have students who go to an urban farm, touch the soil, and make the connection between healthy farms and good food. I’ve seen adolescents change their diets just by showing them an alternative way of eating, not telling them what they should and shouldn’t do, but by presenting a different model.

We have taken people on farm tours who have never stepped foot on a farm, including people who have lived in Marin all their lives. They just drive by and never think to stop. And they’re moved by the experience. At a recent cheese tour there was a dead cow on the property and the farmer didn’t even seem to notice but everyone else did. I asked him if he would address it and he explained, quite rightly, that the cow was at the end of her life, death is a part of farm life—of any life—but we often shield ourselves from such things. It wasn’t as pastoral as people might imagine but it was real.

Securing sponsorships and partnerships to make this a sustainable business. I launched this right when the economy was tanking. It’s tough. But there’s so much around me that’s inspiring: great resources like UC, the Ecology Center, and people in this building, who are innovators who think outside the box.

I just got my first grant from Cal to show students where they can buy sustainably in their own backyard. I’m hopeful that as people get to know us more funding will come our way.