Did a Government Study Just Prove that BPA is Safe? | Civil Eats

Did a Government Study Just Prove that BPA is Safe? 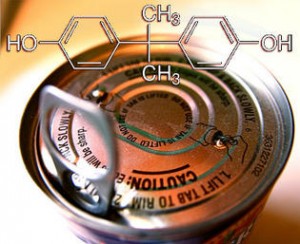 Though it has dropped from the headlines recently, the bisphenol A discussion continues to rage. California is one Jerry Brown signature away from a partial ban of the chemical, which is used in everything from canned goods to PVC plastic to cash register receipts. There is ample evidence that BPA, an endocrine disruptor, has been linked to various ills, including diabetes, cancer, and heart disease. Some scientists are even raising questions about the damage it’s doing to our oceans.

And, despite FDA footdragging on the issue, the government is worried. The National Institutes of Health recently initiated a $30 million research program (though not without some controversy) to examine the growing risks and make a final call on BPA’s safety.

Now, a new study by U.S. government scientists purports to debunk the entire BPA threat. It claims that BPA poses no risk whatsoever and goes so far as to conclude that every previous study that found otherwise was fundamentally flawed.

If true, that would be great news. Getting BPA off the toxic chemical list would make everyone’s life a whole lot easier. So I contacted experts in BPA research to see if this study was all it was cracked up to be. Their answer: No way. They expressed serious concerns, if not outrage, over the study’s broad conclusions and went so far as to question its validity.

The study, recently published in the Journal of Toxicological Sciences, was performed by toxicologists from several government agencies, including the Department of Energy, the Centers for Disease Control and Prevention, and the National Center for Toxicological Research. It involved feeding a group of 20 subjects canned food three times a day in a laboratory setting and then measuring the levels of BPA in their blood and urine.

When all was said and done, the scientists claimed to find “undetectable” levels of the endocrine disrupting chemical in the bloodstreams or urine of their subjects. It claims to debunk  previous studies that have detected low levels of BPA in human blood or urine. And it says the risk from BPA to pregnant women and their fetuses is likely non-existent, despite the fact that no pregnant women (and thus, no fetuses) were involved.

Interestingly, this study was not part of the NIH BPA research program. It was done independently and funded by an EPA grant, according to its lead author, Dr. Justin Teeguarden, a scientist with the Department of Energy’s Pacific Northwest National Laboratory. For the record, Teeguarden’s previous work focused on nanotechnology and, as far as I can tell, this is his first published work on BPA.

Being new to BPA research did not stop Teeguarden from telling a Forbes columnist:

In a nutshell we can now say for the adult human population exposed to even very high dietary levels, blood concentrations of the bioactive form of BPA throughout the day are below our ability to detect them, and orders of magnitude lower than those causing effects in rodent exposed to BPA.

That is quite a statement. Indeed, the broadness of Teeguarden’s claims, as well as several of the study’s techniques, have caused serious consternation among other scientists.

Dr. Laura Vandenberg, author of a definitive peer-reviewed survey of BPA research, said that the work, is “interesting,” but has major shortcomings. The first thing that caught her attention was the fact that the researchers didn’t test the BPA levels in the food given to study participants. BPA may be, as the study declares, “ubiquitous” but it’s also well-known that BPA levels vary greatly from brand to brand and even from can to can. Given those facts, said Vandenberg, “they made tremendous assumptions … I can’t see how you can conclude that all previous studies” were invalid based on this one investigation.

Vandenberg went on to say that it’s impossible to “ignore dozens and dozens of blood studies and 80 biomonitoring studies” that have consistently found detectable BPA levels in human blood and urine. Nor does she feel comfortable blaming others’ positive results on “contamination,” as the team led by Teeguarden does.

In fact, when I spoke to Dr. Michael Hansen, senior scientist at Consumers Union, the nonprofit publisher of Consumer Reports, he pointed out  that this study did find detectable BPA levels in three subjects, but for reasons that are not well explained, they were excluded.

Another mystifying element of this paper involves water–and lots of it. The study participants drank 3.5 liters of water each day of the study. That’s about three and half times the amount most people drink in a day, Hansen explained. And while most BPA research uses methods to account for dilution caused by water, this study did not.

To conduct the research, Teeguarden applied what are called “toxicokinetic” techniques, which involve examining exactly how a chemical breaks down in the bloodstream and precisely what happens as it interacts with the human body. While that sounds like a helpful way to approach BPA, Vandenberg believes that there are significant problems with relying on toxicokinetic techniques to analyze BPA exposure. In fact, she has written extensively about those problems. She concludes, in essence, that both the current toxicokinetic tools as well as the scientific understanding of BPA are limited enough that these techniques alone could lead a researcher down the wrong path.

Another odd feature of this study that caught Vandenberg’s attention was that, for key citations regarding how the body handles BPA and how much BPA people consume, the study relied on industry-funded work that many scientists consider to be flawed. Vandenberg couldn’t come up with a reason why Teeguarden would do this.

For his part, Teeguarden vigorously defended his work to me in an email. As for his use of toxicokinetics, he said:

If it is so problematic, why has it been identified as so important and why are so many people working on it? …The truth is, without the information we obtain from measuring BPA in the blood of animals and humans, we have no basis for assessing hazard in the human population.

This is undoubtedly true. However, scientists who have applied this technique to BPA say that it simply can’t yet do the “heavy lifting” Teeguarden is asking of it. Teeguarden has, if not misused it, at least stretched it beyond its current capabilities.

Despite Teeguarden’s abundant confidence, there is nothing clear cut about his research. In fact, several leading BPA researchers have penned a highly critical dissection of Teeguarden’s study–including a rejection of its approach, its choice of sources, and its validity–that has been accepted for publication by the journal that published the study in the first place.

If you’ve made it this far–despite the total absence of puppies–and are wondering why I’ve devoted so much space to this issue, it’s due to this latest work’s pedigree. A government-funded study performed by government scientists in government labs and involving the DOE, the CDC and the NCTR is bound to get a lot more attention than a smaller academic study, especially given its dramatic conclusions. Even so, the study provides little for industry to sink its teeth into–though the tin can lobby is surely trying.

This is not the only recent work on BPA that’s raising eyebrows among independent scientists. Research out of China published in Annals of Internal Medicine claiming to find no conclusive link between BPA and diabetes is also under fire. As Reuters reports, the study did find that those with higher levels of BPA exposure were more likely to have diabetes, but the authors simply dismissed the connection.

Meanwhile, research on the dangers of BPA continues to come out as well. Scientists recently found evidence that BPA (as well as the preservative methlyparaben) can, as hormone disruptors, interfere with breast cancer drugs (via SF Gate). That might partially explain why industry is so desperate to find evidence that BPA is not at detectable levels in human blood.

The fact is that, like Agent Mulder, I too want to believe; if BPA was completely harmless we could all go find other things to worry about. And while any scientist can stand up and claim that it’s safe, there are still quite a few of them telling us loud and clear that it’s not.