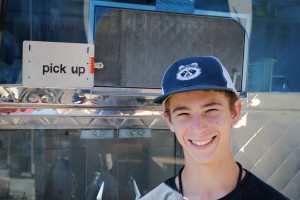 I’d like to introduce you to CC; he’s 19 years old and he’s a new friend of mine.  About a month ago, my fiancé and I opened a little coffee shop in an old gas station in Santa Cruz, California. Our friend, Fran Grayson, came to us with a vision of collaborating on the idea and now she parks her food truck on-site. Together, we are The Truck Stop and Filling Station. We strive to promote good, honest, and quality food and drink. This is where CC comes in.

In 2009, CC was attending an alternative education high school. Doron Comerchero, director of “Food, What?!”, came to the school one day offering internships. His local program empowers youth through the growing, cooking, and sharing of food. Though CC signed up in order to get out of school early on Fridays, his hooky plan became a serious commitment.

“Doron pulled my ass out of the gutter. It was a really bad year for me,” he recalled in hindsight. That initial 12-week internship led to a “Food, What?!” summer job program in which he was paid to participate. Earning actual money reinforced the value of the life skills he was learning and cooking and catering turned out to be something that CC actually really loved.

The full circle process of growing, harvesting, menu planning, cooking, and presenting “felt like a lot more than a catering job, in a good way,” he said.

Career training and food education aside, CC became a part of a growing community. At a recent benefit for “Food, What?!”, he acknowledged his empowered sense of self and offered a “thank you” to the organization that helped him to “speak [his] mind and speak [his] heart.” To his inspired listeners, he explained, “We grow organic, sustainable vegetables, friendship, trust for a team, [and] the ability to come together, join forces, help each other…”Food, What?!” showed me what a community is and how you can partake in it and contribute to it at the same time.”

CC’s community broadens day by day. After “Food, What?!”, CC went on to do an internship at the Homeless Garden Project during his senior year–an experience which also involved seed to fork education.  Meanwhile, Fran was hatching her plan to finally create a space where food and social change could collide. Working as the head gardener at Life Lab, the umbrella garden education non-profit that holds “Food, What?!”, she strategized her first move. “I never wanted just a food business, I always only wanted a food business that incorporated a social good, work training aspect…It is like I had to get to Life Lab and make the connection before it could naturally move forward.”

CC and Fran crossed paths when Fran approached CC immediately after opening The Truck Stop. Knowing that she needed help, she pitched the idea of collaboration–extra hands for her, an opportunity for career development for him.

“My friendship, and mentorship, and appreciation for CC, have come about over the past two years.  All of the thinking and planning and waiting and watching, all finally came together on this project. It is an amazing experience and I hope to expand on it with more kids, and catering with the kids and the truck, and doing nutrition education,” Fran said. “For now I am fully dedicated to my mentor role and could not have imagined a more perfect mentee. I want this business to be a success so that it can continue to be a vehicle, pun intended, for continued training and mentorship for the kids that have come such a long way, thanks in large part to the incredible work that “Food, What?!” is doing. It is something very special to be a part of.”

Today, CC is waiting to hear back from the Culinary Institute of America at Hyde Park, NY. His love of cooking and food shines through to everyone he meets, including a CIA alumni who happened to enroll in the apprenticeship program at the Center for Agroecology and Sustainable Food Systems at UCSC (where Life Lab and “Food, What?!” co-exist). With a powerful letter of recommendation, CC is keeping his fingers crossed that the full scholarship comes through. To him, culinary school is just another step towards his “ultimate grand vision” to replicate “Food, What?!” in a broader way. “I want to educate kids, adults, old people, everyone, that it’s easy to find out what’s in your food and it’s really easy to make your own food. It’s not hard, you just gotta try a little.”