Arrest Does Not Stop Food and Freedom Ride | Civil Eats

Arrest Does Not Stop Food and Freedom Ride 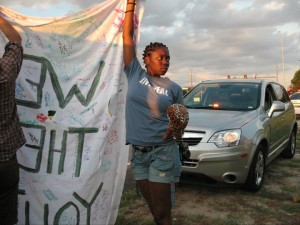 When we took the Freedom Rides as inspiration, we didn’t actually expect to have a run-in with Mississippi police. Our journey, the Food and Freedom Ride, was about honoring the anniversary of a heroic journey while also drawing attention to one of the biggest issues facing our generation: the dearth of real food in our communities and the resulting health, environmental, and economic crises. 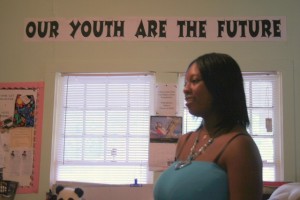 On Friday, August 5th, two days before the Food and Freedom Ride began, one of the riders, Courtney Oats, was arrested on a charge of “disorderly conduct” in her hometown of Eupora, Mississippi, before she could even join us.  The arrest occurred at her sister’s 14th birthday party in front of 50 children. Tasers were drawn and K-9 units were called in.

The arresting officer had run into Courtney earlier in the day, when she was hanging up flyers announcing the arrival of the Food and Freedom Rides—as well as the groundbreaking for a new community garden. “Bringing people into town can get you into trouble,” the officer said, according to Courtney.  Courtney, 21, comes from a family of community organizers that has been harassed by the police before. Her great-aunt was Fannie Lou Hamer of the Mississippi Freedom Party. Her mother has received death threats on multiple occasions for the work she does.  Courtney and her family believe they were unjustly targeted by the police in this instance.

Courtney envisioned the community garden as a place for physical and racial healing.  It is one of the things she wanted to accomplish as a Real Food Fellow. The fellowship is a program of Live Real, a new national youth initiative with the goal of making real food the norm in America, not the exception. Courtney was bailed out the next morning. We kept our date in Eupora to break ground for the garden, and also accompanied her to her hearing.

Courtney is out of jail now but not yet free to focus on organizing. Her trial is set for September 27th.  If convicted of the three charges—public profanity (“the hell you will [tase my sister]”), resisting arrest, and disorderly conduct—she could spend six months in jail. She is determined to take a stand against what she sees as an old boy network in her town that wants people in their place.

Most of us will not get arrested in the course of our food justice work. But Courtney’s arrest is a reminder that doing positive things for your community is not always easy or loved. And it’s a reminder that change challenges the power structure—and that those who have power generally won’t give it up without a fight. 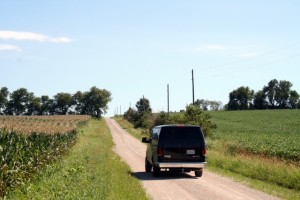 Since then, a lot has happened.  We traveled through seven more states on our way from the deep South to Detroit. Another Food and Freedom Ride in California—from the border to the Bay—just concluded.

Courtney joined the rest of the trip.  She was able to postpone her trial, originally set for September 6th. She is still looking for a lawyer.

Interestingly, this wasn’t our only encounter with the authorities.  Three days after our stop in Eupora, we visited Monsanto headquarters outside of St. Louis, Missouri. We brought seeds from home and a banner representing a Youth Food Bill of Rights. Five cars—from both Monsanto security and the municipal police—had us surrounded within minutes. The day before, we had met a seed cleaner in Illinois who had been blacklisted by Monsanto. While we said a prayer over our seeds and sang songs, Monsanto security questioned and photographed us. Knowing that many farmers had been hurt, harassed, or ruined by Monsanto, we took our time.

At 21, Courtney’s journey as a food justice activist is only just beginning, and we will walk with her. We are also producing a video and Web site to share our journey with others, to be launched before Food Day on October 24th. As a movement, we must hold relationships strong, lift each other up, and support each other, sometimes in unexpected ways.

Anim Steel is the Director of Real Food Generation, which sponsors the Live Real initiative and the Real Food Challenge campaign. Read more >