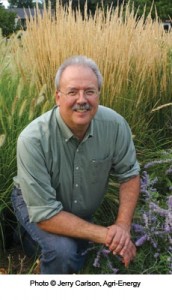 Ken Meter is a very smart guy. He’s also incredibly friendly and, I hear, very fun to hang out with. He’s vocal about how the government needs to stop throwing cash at commodities and start investing in communities and as author of 70 regional farm and food economy studies, his job is to shed light on the realities of food systems change with the hardcore lens of economics. One of the most experienced and dedicated food system analysts in the United States, Ken’s work integrates market analysis, business development, systems thinking, and social concerns.

As president of Crossroads Resource Center, Ken has over 39 years of experience in inner-city and rural community capacity building and is passionate about engaging low-income people in creating solutions for themselves. His pioneering study of the farm and food economy of Southeast Minnesota, Finding Food in Farm Country, helped strengthen a collaborative of food producers and led to the creation of the Hiawatha Fund, a regional investment fund. His work serves as a national model for analyzing rural economics and has been adopted by 45 regions in 20 states across the U.S. and in one Canadian province.

I focus on how local farm and food economies work and how to foster an effective movement to build stronger locales.

We have this amazing movement of people trying to localize themselves and create local food systems. I’m lucky because I get to visit a lot of these folks. I think we can all be more effective if we understand how economies work, and can take action together to bring about a profound transformation.

If we can build better food systems in the U.S. that build health, wealth, connection, and capacity in our communities, it will be the most significant step we can take toward economic recovery. We’ve seen over the past two to three decades that the highly competitive, cutthroat economy is destroying the social fabric of our country and sucking money out of our communities. That doesn’t work when it comes to food. We have to make sure that everyone is eating well and that the food is safe.

U.S. consumers spend a trillion dollars a year buying food and each of us spends a share of this three times a day, if we are able to. Food is something that is on our minds all the time. The skills we learn by trading food in ways that build stronger communities will carry over into the broader society.

Blogs are great for spreading the word fast, but I don’t read a lot of blogs. I read newspapers and magazines and way too many reports, trying to find deeper stories than what is obvious on the surface. I write and produce studies, so I often go back to the original data, to analyze it, or I am visiting farms or businesses in person or talking on the phone for interviews.

One book I really admire is John Berger’s Pig Earth. It’s a poignant description of a French village where people live together for most of their lives. It describes how people set up barriers against each other, and also how they get close, when life forces them together. I learned a lot about how important the peasantry was to shaping society in Europe.

I have a national community of professional colleagues who help sustain me, as I’ve worked in 30 states and have written 70 regional farm and food economy studies. Each place I go, I meet animated, active colleagues who are raising issues and working forcefully. Unfortunately, my travel makes it hard to maintain community life in Minneapolis where I live. For 20 years, I chose to live in a low-income community because I enjoyed it there. I now live in the home I was raised in, in a suburb, where I can have a bigger garden.

I try to be very forthright in how I work with people. I try to build connections with the people I work with so we can work out of a sense of respect and trust. I’m pretty committed to doing as much as I can in my life to make this a better society where people have better lives and better opportunities.

I see change in the U.S. being something that’s very rapidly being organized by people for themselves, to provide an alternative to the ignorant and immature whining that big money funds. It’s a very chaotic time. There are so many young people, farmers and consumers of all ages saying there’s something wrong with what we’re doing. People are very hungry for honest political discussion and effective work.

Change is learning from mistakes, breaking old habits and letting things emerge that we know we can’t predict but know we need to get to. Because we have had it so easy in the United States, as a people who have benefited from prosperity that was built upon privileged access to cheap oil and upon removing resources from other nations, I think we often behave like spoiled addicts. In many ways, change is recovery.

I work fairly closely with the Community Food Security Coalition (CFSC), because it is one of the few networks that understands we won’t have effective food systems unless low-income people are actively engaged in building answers for themselves. I’ve taken leadership to help create a Community Economic Development Community to bring local food leaders into better contact to learn from each other.

I also worked with USDA for seven years, advising the Community Food Projects. This is a remarkable program in which federal money actually is designed to leverage the work that low-income communities launch to build better food systems for themselves.

I’m impressed with all my partners, and it would be impossible to pick just one. I’d point to two right now. Dream of Wild Health: This is a Native American project with a phenomenal history. A Winnebago elder woman devoted decades to cultivating traditional corn, beans and squash. She saved and planted their seeds, and tended to them in a garden as far from GMOs as she could find. When she was 92 she passed these precious seeds onto Dream of Wild Health. Now these are helping feed the Indian communities of the Twin Cities. It’s a profound way to carry on new linkages in the community and pass on a critical heritage.

I’m also writing a study of the Indiana food industry. There is a great deal emerging there, and I have been so welcomed by people all over the state who have invited me to their farms and homes. Some really immense issues are at play, and people are talking about them very honestly. I feel privileged to have this chance to help foster this change.

It’s hard to have much hope for Congress taking action right now, with the polarization in politics and the tremendous hatred broadcast by so much of the media.

Moreover, the shift we need to make is to stop throwing cash at commodities, and to start investing in communities. Congress will not take the lead on that because of who funds them. We have to make this happen at the local level first. Congress needs to see this happen in their home communities. Once we show what is possible, Washington will have no choice but to support it—but we may not get strong enough unless we can make use of federal money to achieve our visions.

We have phenomenal energy and vision as a movement. I’d argue it’s the most broad-based movement I’ve experienced in my lifetime. We have plenty of drive. Yet most groups I know could use ten times the money they have access to right now.

We spend way too much on war that undermines our communities where we live because we’re exposing our soldiers to random attacks, and dropping bombs overseas. We have policies that subsidize the wealthy, while schools lack basic supplies, and have to deal with the frustrations of students who feel this injustice. If we can find ways for local people to invest in our own communities, in ways that help us keep resources locally to work for a common good, we may be able to reverse all this. I think food is how we are figuring this out.

Since you ask this question during the summer in Minnesota, I think of pesto from my garden. I like the intense flavor of the basil and how it propels me forward in the hot weather.