In Nebraska, On The Farm | Civil Eats

In Nebraska, On The Farm 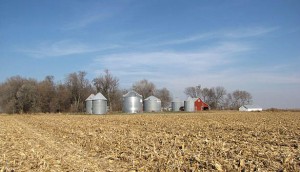 Clearly I mean this in the literal, not euphemistic, sense. (Although I’ve spent some time pondering why the phrase “bought the farm” means “to die,” but I digress.)

According to the legal survey, my farm is “12 acres, more or less,” meaning the surveyor measured off 12.006 acres and called it good. It has a cute farmhouse that I love living in, six strong outbuildings, a grove of trees on the north and west sides, and 4.6 acres of ground formerly planted in a corn-soybean rotation that now has grass seeds sprouting in it.

I live in northeast Nebraska, where a “farm” is usually much bigger than 12 acres, and a “farmer” is typically a 59-year-old white man who grows corn and soybeans and/or raises cattle for a living. Folks around here would call my place “an acreage.” But I aim to grow enough food to feed myself and others in my community. Isn’t that what a farm does? I’m calling it a farm, even if there are those who would object.

Buying this farm is a plateau in a pursuit that started for me as a wide-eyed college student reading My Ishmael by Daniel Quinn. It dawned on me that the most rebellious, independent act I could commit against an unjust social and economic system would be to grow my own food. I was pretty into rebellion then, but even as I’ve aged the idea doesn’t lose its shine.

Luckily I met a partner who didn’t think growing things was a crazy idea, and soon we were causally farm shopping. We were pretty picky–we wanted a sturdy house and barn, 10-20 acres, nice land with a grove of trees and a commuting distance of no more than 5 miles to work.  I really wanted hardwood floors, but I think I would have settled if everything else fell into place.

We made offers on a few places, all the while friends and neighbors told us about a perfect place exactly 5 miles from our office. The first time I saw it, I fell in love. I held it up as the gold standard to every other house we looked at, even though it wasn’t on the market because the son of the owner wouldn’t sell “until Dad died.” I wasn’t going to hope for that, so we kept looking.

When our banker called to say that the owner of “that perfect place” had passed on at age 97, I could only hope that his son listed the house at a price we could afford and with enough acres to satisfy us. He did, and so in the dead of the worst winter in 30 years (according to my neighbors, but we’ll see what they say next year), we moved to the country.

The legacy of those previous owners lives in the apple trees, raspberry bushes, rhubarb patch, daffodils, and grape hyacinth that my partner and I now enjoy–as well as the surprises that keep popping out of the ground even 18 months later.

We’re now finishing up our second season in the garden, and it’s been delicious. The peas, onions, kale, and broccoli have taught us about storage, moths, and frost. Tomatoes, peppers, and eggplants that got their start as seedlings in a room upstairs with a big south-facing window have helped us experiment with pressure canning, low tunnels, and mulch.

We’ve also planted 350 tree seedlings we ordered from our local Natural Resource District. Deciding which trees to order took a long time–we took stock of what we have in our grove and what we lack, what purpose we want the tree or bush to serve, and how much room we have. In the end, we got lilacs and dogwoods for a hedge to protect the garden from road dust and pesticide drift, red cedars for a living snow fence, Colorado blue spruce to fill in the shady gaps, and cottonwood and honey locust for firewood.

The red cedars and dogwoods came to us looking robust, while the blue spruce and honey locusts were hardly more than twigs. Fingers crossed that most of them make it, despite my tripping over them in the dark on the way to the chicken coop. 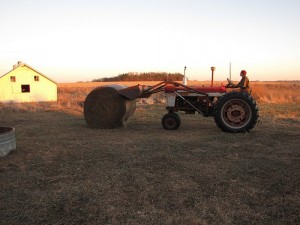 I’ve already learned a lot about owning a farm in the few months I’ve been here, like how to drive our 1960s Farmall 460 tractor and what the proper distance is to stand from a chain saw operated by someone else. (Answer: if there’s sawdust in my eyes, I’m too close.) I’ve found that grain bins look an awful lot like space capsules on the inside, and that baby chicks are only adorably cute for the first week.

We have laying hens that give us a rainbow of eggs most days, about 10 or 11 different breeds. This spring they got sick, and we had to learn how to make the tough choice to cull when nothing we did helped them recover. Our Katahdin sheep have so far given us lambs as well as laughs, and a few lessons in midwifery along the way too.

I have big plans for this farm, though they’ve been tempered by a dose of reality: A full time job makes part-time farming hard to balance. But I’ve gotten to the point where I believe I’m at least a part-time farmer, and my home needed a name.

Steph Larsen lives in Lyons, Nebraska, where she and her partner are "part-time farmers" growing food for themselves and their community. Steph holds a Master's degree in Geography from her home state of Wisconsin and serves on the board of the Women, Food and Agriculture Network. Read more >